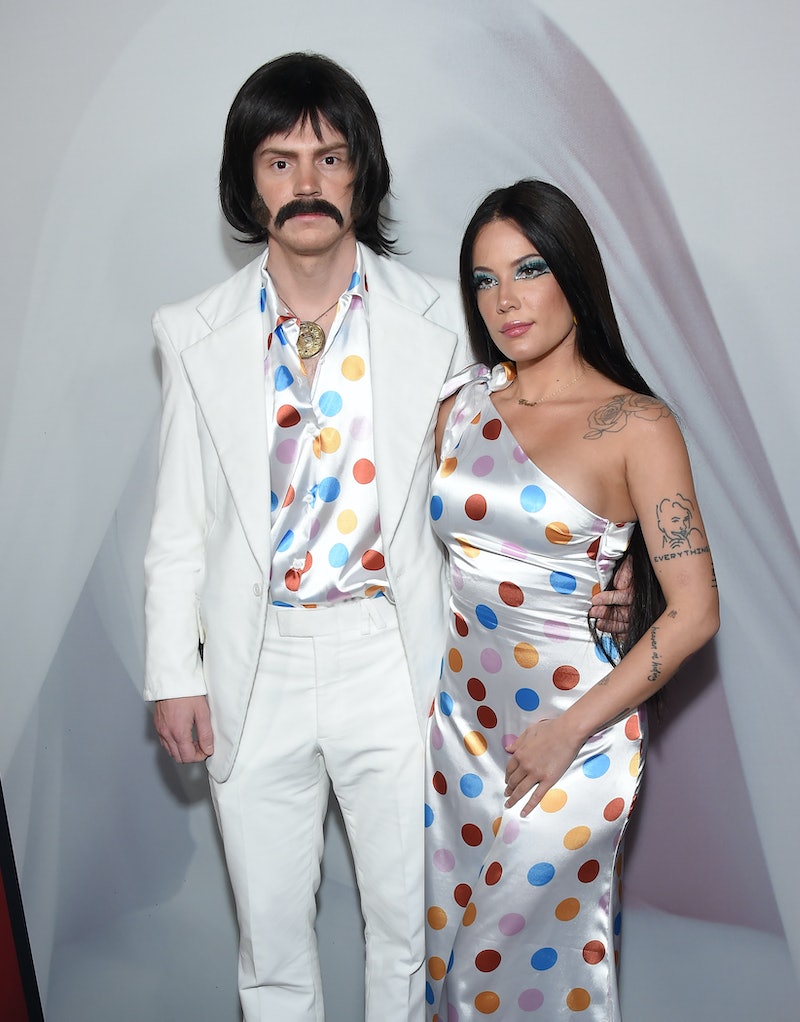 Perhaps Halloween is the ultimate holiday of love. Halsey and Evan Peters’ Halloween photos prove they’re Instagram official. Halsey took to Instagram on Saturday, Oct. 26 to share a few snapshots from her annual Halloween party in Los Angeles held on Friday, Oct. 25, where she donned a Marilyn Manson costume alongside her rumored beau. The “Without Me” singer channeled Manson’s 1998 Mechanical Animals album cover art with a white turtleneck bodysuit, red hair, blue eye makeup, and mismatched contacts. Peters, on the other hand, opted for a costume as a fan of the hip hop duo Insane Clown Posse with an ICP jersey and black-and-white face paint to complete the costume.

In Halsey’s Instagram post, Peters is posed with the singer in the second photo set. She captioned the post, “resident goths” and tagged Manson. Following Halsey’s Halloween party on Friday, the two attended an American Horror Story party on Saturday at the Hollywood Forever Cemetery, according to Entertainment Tonight. At the cemetery, the two took their coupling to the next level with matching costumes as musical duo Sonny and Cher. The two rocked coordinating polka dot ensembles and donned Sonny and Cher’s signature facial hair and long locks.

Halsey and Peters first fueled romance rumors in late September when they were spotted at the Six Flags Magic Mountain theme park in Los Angeles, California, as per Daily Mail. A source told the publication that the two “were laughing and flirting the whole time” while they waited for a rollercoaster. “It looked really romantic,” the source said. The two were spotted together again in late October, where they enjoyed a meal in Sherman Oaks, California, as per E! News. The two have reportedly been seeing each other for "several weeks" now, according to Us Weekly.

Halsey's crush on the American Horror Story actor has been well documented in the past. She reportedly tweeted in 2012, “Seriously Evan Peters stop making me attracted to alleged sociopaths and accused murderers….," as per Us Weekly. In 2013, she reportedly also tweeted, “Petition for Evan Peters to date me.” Halsey's love of AHS even resulted in her filming her “Colors” music video in the house where much of AHS: Murder House took place. In a behind the scenes of the video, she even referenced Peters’ character while exploring the home’s basement. “The lights just started flickering before,” she said in the video. “Some say it's a loose bulb. I disagree. I think it's the ghost of Tate Langdon's past.”

To put it simply, Halsey has long been a fan of Peters.

More like this
15 Photos Of 'The Last Of Us' Star Pedro Pascal That Cement His Zaddy Status
By Radhika Menon
Courteney Cox & Laura Dern Proved Their BFF Status With Matching Tattoos
By El Hunt
'RHOSLC’s Heather & Whitney Are Still On A “Friendship Break” After Season 3 Reunion
By Jake Viswanath
Everything To Know About 'RHOSLC' Season 4
By Jake Viswanath
Get Even More From Bustle — Sign Up For The Newsletter
From hair trends to relationship advice, our daily newsletter has everything you need to sound like a person who’s on TikTok, even if you aren’t.