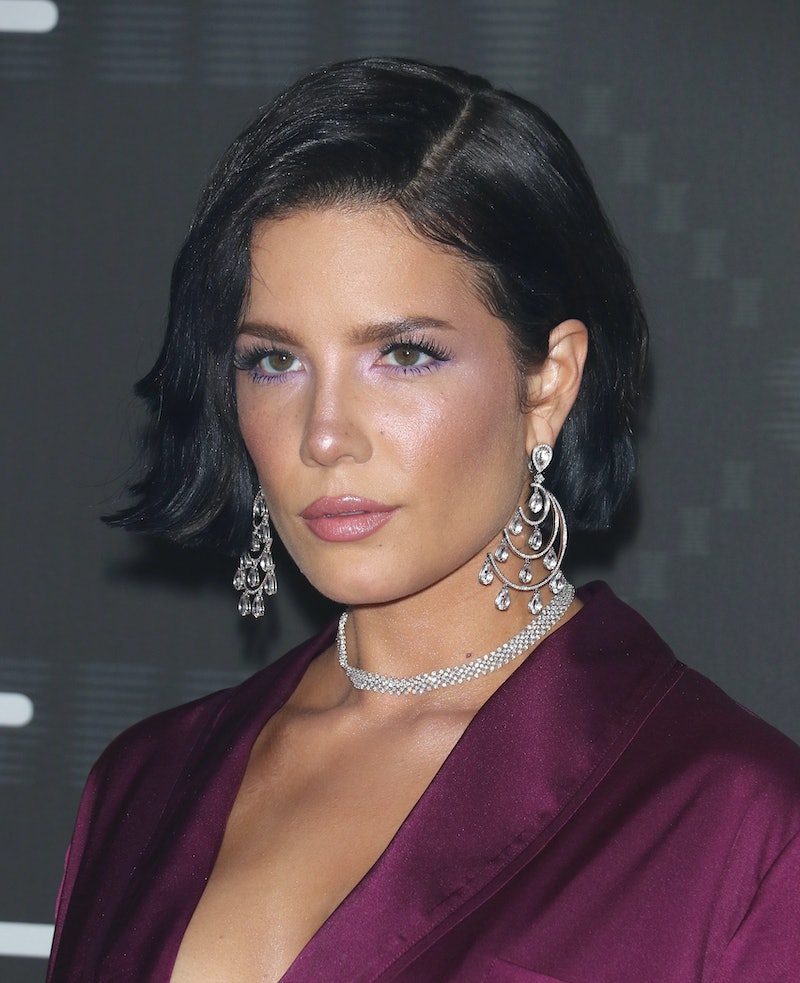 Halsey might have hit single called "Bad at Love," but it looks like the singer has found happiness and romance with someone new. Halsey and American Horror Story star Evan Peters are dating, and have reportedly been spending time together over the last few weeks, Us Weekly recently confirmed. Rumors of a possible romance between the singer and Peters first began swirling on Sep. 21, when The Daily Mail published photos of the pair holding hands while riding a roller coaster in Six Flags Magic Mountain. The outlet reported that they spent the day smiling and flirting with one another while visiting the Los Angeles theme park, with a source telling the paper that they were "looking into each others eyes" while waiting for the ride to start.

While there aren't many details available about Halsey and Peters' reported romance, the singer has often tweeted about her crush on the American Horror Story actor many times over the course of the past seven years. "Seriously Evan Peters stop making me attracted to alleged sociopaths and accused murderers…." Halsey wrote in a now-deleted tweet from November 2012. According to Us, the singer reportedly tweeted dive different times about her affections for Peters, though they all seem to have been taken down.

In 2013, she reportedly tweeted, "Petition for Evan Peters to date me," according to Us, and last tweeted about her crush on Peters in November 2014. "I’m a f*cking liar I’m so in love with Evan Peters I’m so whipped I’m whipped as f*ck," Halsey wrote at the time.

The singer is such a fan of the horror anthology show that she even filmed the music video for her 2016 single, "Colors" in the same home where much of AHS: Murder House was set. In March 2016, she also released a behind the scenes video chronicling the making of the clip, in which she gave Peters' character a shout out. While wandering through the home's spooky basement, Halsey says, "Everything is spooky, the lights just started flickering before. Some say it's a loose bulb. I disagree. I think it's the ghost of Tate Langdon's past!"

Before Peters, Halsey was most recently linked to British rocker Yungblud, though he seemed to confirm that they had split on his Instagram Story on Sep. 27. Ahead of a concert in Orlando, Florida, Yungblud yelled into the microphone, "somebody take me to Disneyland," which some fans think is a dig at Halsey's theme park date with the actor. Peters, meanwhile, called off his engagement to Emma Roberts in March 2019, after a seven year, on-and-off relationship that began after they starred opposite one another in 2012's Adult World.

In an October interview with Cosmopolitan, Halsey reflected on the difficulties of being in a public relationship, especially in the wake of her "heinous" breakup with rapper G-Eazy. "I was doing Good Morning America and I’m in a blonde wig and white patent-leather outfit, twirling around while I’m going through a heinous breakup," she told the magazine, reflecting on how the moment changed the way she thinks about her own celebrity.

She continued, "I look down and there are these two girls, one with pink hair, one with blue hair, septum piercings, cool as fuck, still loving me, probably knowing what a weird time I’m going through. I looked at them, looked at myself in my sparkly Britney Spears outfit, and went, Ohhh no, they deserve way better than this. If those girls can be that brave in who they are, then I owe them better than this homogenized bullsh*t. But hey, if the worst thing that’s happened to me so far is I wore dumb clothes and dated a sh*tty dude, I think I’m doing all right." Considering Halsey is now reportedly dating her celebrity crush, it seems like she's definitely doing all right, indeed.

More like this
Who Is Camila Cabello Dating? She's Getting Cozy With Lox Club CEO Austin Kevitch
By Radhika Menon
An Ultimate Guide To The Music Of 'Rap Sh!t'
By Brad Witter
How Lady Gaga & Adele Are Closer To The EGOT All Of A Sudden
By Jake Viswanath
Bridgerton’s Simone Ashley Stars In ODESZA's "Love Letter” Music Video
By Radhika Menon
Get Even More From Bustle — Sign Up For The Newsletter