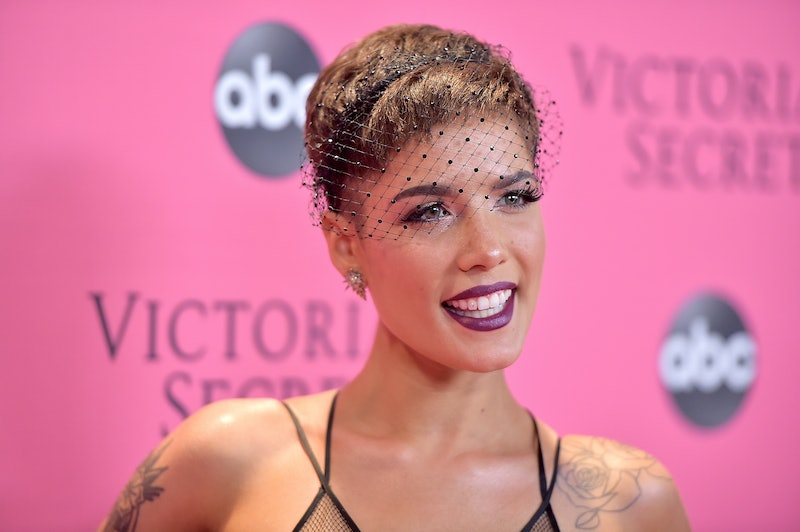 It's been said that music is good for the soul, but its benefits go so much further beyond just that. Take, for example, one singer's recent comments about how it has changed the way she deals with her mental health condition. During an interview for Cosmopolitan's September issue, Halsey explained how music helps manage her bipolar disorder in an incredibly positive way. The metaphor she used to illustrate her revelation was really beautiful too, and totally makes her disorder a whole lot easier for fans to understand.

Halsey has always pretty open about her struggles with mental health, and she definitely didn't shy away from the topic while chatting with Cosmo. The singer told the outlet that having bipolar disorder often causes her to "get bored of sh*t, really quickly," except for when it comes to writing songs.

She then went on to explain,

"Music is this thing that I get to focus all my chaotic energy into, and it’s not a void that doesn’t love me back. It’s been the only place I can direct all that and have something to show for it that tells me, 'Hey, you’re not that bad.' If my brain is a bunch of broken glass, I get to make it into a mosaic."

This isn't the first time that Halsey has opened up so publicly about how music has helped her manage her disorder in a positive way. In fact, while speaking to Rolling Stone back in June, she admitted that while she's been "committed twice" to a psychiatric hospital since skyrocketing to super-stardom, her success as an artist has actually made her more "accountable" for herself and her health.

"I’ve said to [my manager], 'Hey, I’m not going to do anything bad right now, but I’m getting to the point where I’m scared that I might, so I need to go figure this out,'" she told the outlet. "It’s still happening in my body. I just know when to get in front of it."

It really seems like her career has helped her feel way more comfortable in her own skin. As for what that skin looks like to everyone else — well, let's just say that she's not super concerned about being any one thing for any one person.

She still gets questions like, "'Are you a crazy, rambunctious bad girl, or are you an activist, political, fund-raising philanthropist?'," she told Cosmopolitan, but she refuses to let people put her in a single box. "Like, how f*cking immune are you to the human experience?" she laughed. "Sometimes I want to have really good sex and sometimes I want to save the world, and sometimes I might try to do both in the same day!"

That right there is what you call multi-tasking, my friends, and if anybody can do it, Halsey can. She appears as if she's more self-aware than ever these days, doesn't she? Since her career shows no signs of slowing, that's a really, really good thing. Now all she has to do is strap herself in and enjoy the ride.