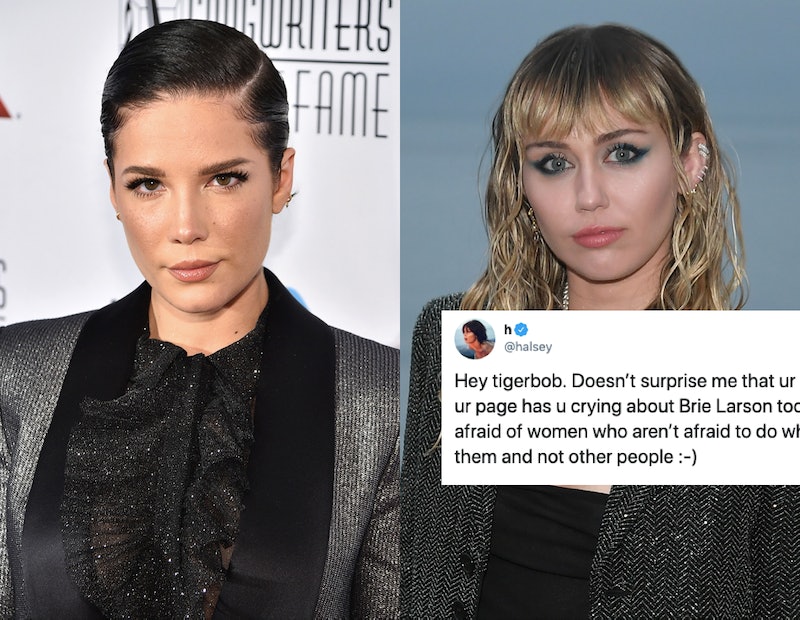 This singer stands up for her friends and her community. On Sunday, Halsey tweeted about Miley Cyrus' breakup, and her reply to a rude troll shut down a misconception about sexuality in the process. On Twitter, someone blamed the recent split between Hemsworth and Cyrus on the latter's sexuality, calling her "greedy." Halsey responded to the biphobic comment, calling out the inherent homophobia and sexism in the tweet.

The initial message criticized Cyrus for separating from Hemsworth, writing, "#MileyCyrus splitting and allegedly cheating on Liam with a woman confirms that you shouldn’t date bi people. Not offensive, just true. Bi is greedy and never satisfied." Halsey wasn't having any of the comment, and quickly retweeted to stand up for Cyrus. She wrote:

Hey tigerbob. Doesn’t surprise me that ur saying this and ur page has u crying about Brie Larson too! Stop being afraid of women who aren’t afraid to do what pleases them and not other people :-).

Halsey, who identifies as bisexual herself, put the troll on blast for perpetuating a harmful stereotype about bisexuality. The "Without Me" singer also looked at the person's page and noted that their issues with Cyrus appear to be based in misogyny. She pointed out that they seem to have a problem with women who aren't beholden to what men want or patriarchal standards in general.

Not only was the troll sharing hateful comments, they also misidentified Cyrus' sexuality. In 2015, Cyrus opened up about identifying as pansexual, citing the label as feeling true to her experience, as per ABC News. The singer told Variety in 2016, "My whole life, I didn’t understand my own gender and my own sexuality. I always hated the word 'bisexual,' because that’s even putting me in a box."

Rumors that Cyrus and Hemsworth had called it quits began on Saturday, when Cyrus shared a vacation photo on Instagram, in which she doesn't appear to be wearing a wedding ring. That same day, the high-profile couple confirmed the split, a rep for Cyrus issuing a statement to People that read:

Liam and Miley have agreed to separate at this time. Ever-evolving, changing as partners and individuals, they have decided this is what’s best while they both focus on themselves and careers. They still remain dedicated parents to all of their animals they share while lovingly taking this time apart. Please respect their process and privacy.

The couple first began dating in 2009, after meeting on the set of The Last Song. The two got engaged in 2012, but then called it quits a year later. After reconciling in 2015, Cyrus and Hemsworth wed in a ceremony in Nashville, Tennessee, in December 2018, according to People.

In July, Cyrus discussed sexuality more in an interview with Elle. The singer noted that her choice in partner did not erase her identity. She said:

But my relationship is unique. And I don’t know that I would ever publicly allow people in there because it’s so complex, and modern, and new that I don’t think we’re in a place where people would get it. I mean, do people really think that I’m at home in a f*cking apron cooking dinner? I’m in a hetero relationship, but I still am very sexually attracted to women.

She went on to tell the magazine that she chose the healthiest partner for that time in her life. "I made a partner decision," she said. "This is the person I feel has my back the most."

Fans may be sad to see the couple break up, but Cyrus is clearly aware of what works for her in a relationship, and it sounds like this split was for the best for both stars. Halsey was right to defend Miley — and make sure nobody uses the breakup to justify biphobic attitudes.

Correction: A previous version of this article included the incorrect date of Cyrus and Hemsworth's wedding.