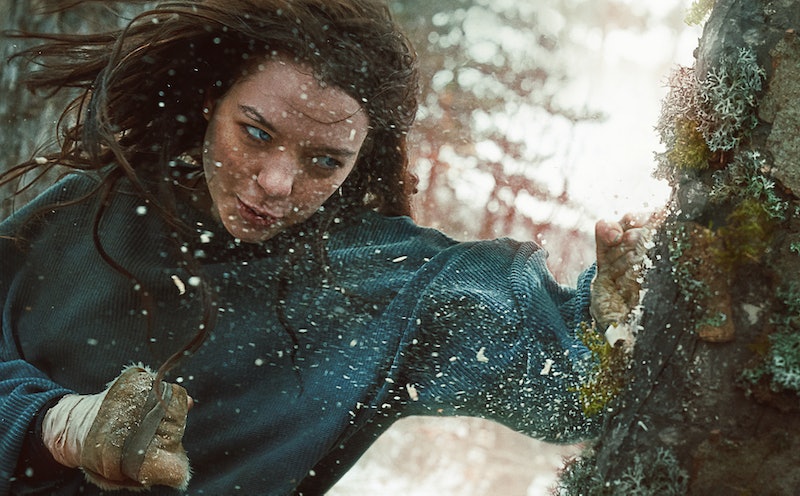 How would your sense of identity develop if you grew up completely isolated from the rest of the world? That's one of the major themes explored in Amazon's new series, Hanna, which stars actor Esme-Creed Miles in the title role. The show, which is based on the 2011 film of the same name, follows Hanna and her father (Joel Kinnaman), a spy on the run who raises his daughter in the forest in order to protect her from the enemies hunting them down. But when her father is captured, Hanna must venture out into the world by herself to try and find him. Bustle caught up with Creed-Miles to talk about her experience shooting the action series, and how stepping into Hanna's combat boots has started to make her interrogate her own sense of femininity, too.

The daughter of British actors Charlie Creed-Miles and Samantha Morton, Creed-Miles definitely didn't have the isolated, sheltered childhood of her on-screen character. She appeared in her first movie, Mister Lonely, at age 7 alongside her mother. But she took a step back from acting for the following decade after that. Now, at 19, she's ready to get back into the family business, only this time — like Hanna — she's striking out on her own.

While nabbing the role of Hanna would be, in Creed-Miles's words, "a fantastic opportunity for [any] young actress," like most jobs, it came with its own unique set of challenges. "I was barely 18, and we were shooting out in different parts of the world for six months. I didn’t see my friends or my family for such a long period of time, and being on my own was really tough."

That separation only magnified the differences Creed-Miles says she felt at first between her and her character. "I didn't feel like there were many similarities [between Hanna and myself] because I personally feel that my childhood has been kind of conditioned by growing up in the modern world and learning a sort of feminine behavior that wasn’t really my own," Creed-Miles says.

Hanna's restricted upbringing makes her unique in comparison to most women living in the real world, so getting into her headspace was an interesting challenge. "I had this moment on set of realizing this girl, Hanna, has grown up completely isolated from and out of touch with a lot of these really toxic, damaging ideas of gender," Creed-Miles says. "So she's kind of free from those bindings. As an actress, it was special for 12, 13 hours of the day to be able to try and forget all that stuff. And the result was kind of redefining my own femininity and what being a woman means to me."

In building a strong female character with such a unique and independent sense of self, Creed-Miles started to come to terms with the damaging impact of the societal pressures placed on young women and girls. "There's this idea of the female body as an object, as opposed to an acting agent in its own destiny. But being a woman doesn't mean that I have to objectify myself mentally on a daily basis, which is still something I have to try to unlearn," she says.

As much as the experience of bringing Hanna to life has helped Creed-Miles, she hopes it can start to do the same for viewers. "Even though most women won’t be able to relate to how fast Hanna is or how many languages she can speak, what they can take away from it is her perseverance toward agency. All she really wants is to be liberated from the control of her father and break free from what she knows, and I think that's kind of transcendent."