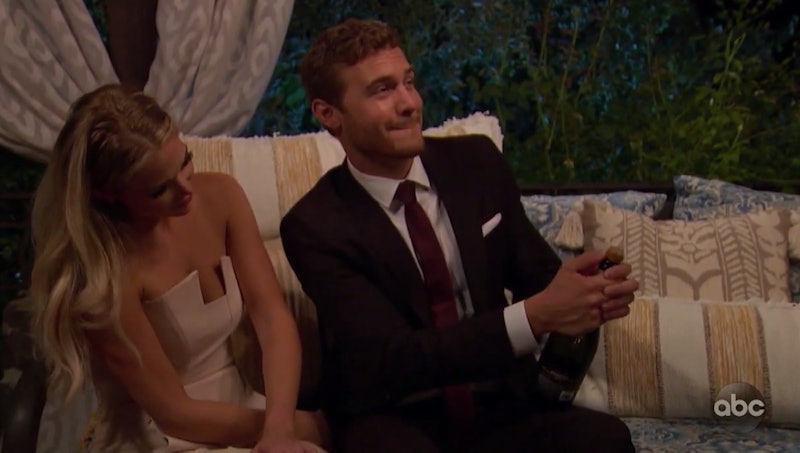 Just like the cork on a bottle of champagne, things popped off in the Bachelor Mansion on Week 2. Shortly before the second Rose Ceremony, Hannah Ann took Kelsey's champagne on The Bachelor, and the ensuing drama between the two ladies forced Peter into a very awkward situation. Tensions were already running high ahead of the evening's festivities, as several girls — including Kelsey — were panicked about the lack of time they had spent with the Bachelor.

In order to make a big impression, Kelsey brought a bottle of champagne all the way from her home state of Iowa, with the intention of opening it during a romantic moment with Peter, even going so far as to set it up in front of the fireplace with plenty of roses. However, before she could bring the pilot over to pop some bubbly with her, fashion blogger Mykenna stole him away for her own private moment — which was conveniently not shown onscreen.

A devastated Kelsey accused Mykenna of being a "snake" and stealing the moment from her, but that was nothing compared to the blow up that resulted when Hannah Ann wandered over to the set up for her own drink with Peter. "It was supposed to be my moment, and she took that from me," Kelsey tearfully told the cameras, before she accused Hannah Ann of deliberately stealing her champagne. Peter, for his part, handled the situation like a true gentleman by running after Kelsey to comfort her and even finding another bottle of champagne to drink with her.

Though Kelsey finally got a moment with Peter, she wasn't willing to bury the hatchet with Hannah Ann. The model offered to talk it out, but Kelsey remained convinced that Hannah Ann knew exactly what she was doing when she popped that bottle with Peter in front of the fireplace. "You don't walk up to something that was lit [and set up] with a champagne bottle and think that it's for you," Kelsey said. "You are fake and you know what you did."

Despite all of Kelsey's accusations, Hannah Ann professed her innocence, telling the other girls that the whole thing was the result of a miscommunication. "There were two bottles of champagne," she said, explaining that she had asked the producers for a bottle of bubbly to match her champagne dress. Considering she and Kelsey ended up standing next to each other for the Rose Ceremony, it doesn't seem unlikely that someone on the production team pointed out the wrong bottle of champagne in order to kick off a little bit of drama before Peter started handing out roses.

While both Kelsey and Hannah Ann scored a rose during the ceremony, the drama was far from over, as "Champagne-gate" reared its head once more after the fashion show group date. "I was up all night crying," Hannah Ann told Peter when they had a moment alone together, saying that she felt "bullied" by Kelsey over the whole incident. Kelsey, for her part, maintained that she wasn't bullying Hannah Ann and that the model was actually intentionally trying to make her look bad to Peter.

Unfortunately for the two of them, it looks like the fight over Kelsey's champagne is far from over. Expect even more explosions to come on future episodes of The Bachelor — and it's going to be even bigger than a shaken-up bottle of bubbly.