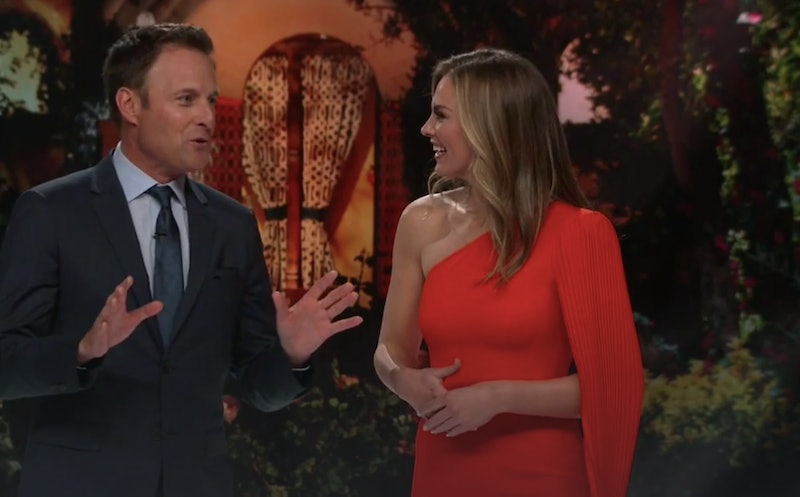 We're barely coming off the heels of the new Bachelorette announcement, but there's no time to rest. It's already time to start speculating about the men who round out up Hannah's cast this summer. During the second night of Colton's live Bachelor finale, Hannah B. met some of her Bachelorette contestants, and they definitely seem like the kind of guys to make for an eventful season.

Hannah's season will premiere May 13, and they're likely already filming right this very minute. Or at least getting ready to pack up and head to the mansion. In any case, the contestants who showed up at Colton's live finale all seemed up for the adventure. Hannah B. has a ton of personality and all of the men fans met on Tuesday night could theoretically be good matches for our fave Alabama pageant queen.

The first man who came out was Luke and he gave Hannah a hug, told her he was hoping she was the Bachelorette, and said that meeting her was "blowing his mind." He can't wait to go on the adventure with her, he said, and called for another round of applause. Smooth, right?

Next was Dustin. He said he was nervous, and wanted to do a toast even though he knows they're both historically bad at it. He handed her a glass, and stumbled through his own cute, clumsy toast about "choosing each other every day." Adorable call back to her time with Colton.

And after that we had Cam, who started to RAP about Hannah. You read that right. Was he gunning for Hannah G. so he could have a rap partner? It was a lot, but hey, at least he was prepared! Next, Connor came out, and also said he was excited about her being the next Bachelorette. He wanted to be on the same level in a new relationship, so he made her a step stool — the "first step toward seeing eye to eye."

Last but not least was another Luke. He notes that she's from Alabama, and even though he doesn't go down South often, for her, he'd "go down anytime." Alrighty, then! At least Colton's season of veiled (and not so veiled) sex talk has prepared us for this.

Twitter had many thoughts about all of the new guys:

Hannah actually ended up asking Chris if she can give out the first rose of the season during the show. She was kind of joking, but she ended up giving her first rose to Cam the rapper, which was an interesting choice, but it does show her sense of humor.

With that, Hannah already seems like she'll be a super entertaining Bachelorette to watch — she seems genuinely kind and silly in a way we don't often see from contestants in this franchise. She told Entertainment Tonight that she's proud of herself for remaining authentic throughout The Bachelor and is game to do it all over again:

"I came in so terrified of what this thing was and if I wanted to be vulnerable with producers, with the girls, with Colton. And then by the end of it, I laid it all out on the table. I freaking roared ... I also was genuine about how I felt. I truly did want the end of it to be me and it wasn't, but I still stayed true to myself and allowed everybody to kind of see every part of me, the good and the bad."

And after her departure on Colton's season, she's proven that she won't settle for anything less than spectacular. "I will not allow myself to not feel chosen every single day," she told the camera as the limo drove her away from what could have been after her breakup. "And I'll wait until whenever that is."

That line is basically iconic at this point and she'll be carrying that attitude with her throughout the season. If the sparks already flying during Colton's finale special were any indication, Hannah has an interesting (and hopefully not too drama-filled) journey ahead of her.