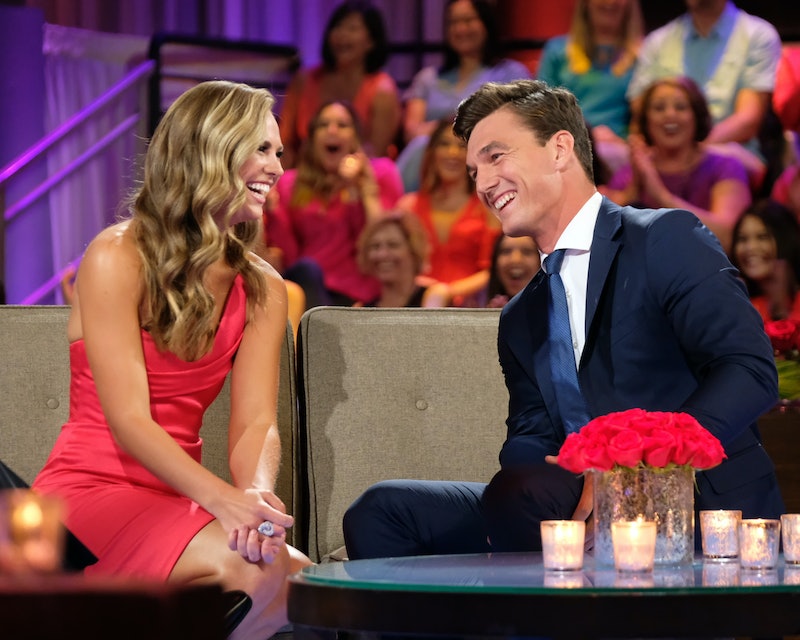 The world may be collectively practicing social distancing in light of the coronavirus outbreak, but that doesn't seem to be stopping a former Bachelorette duo from hanging out on the regular. Hannah Brown reunited with Tyler Cameron for a second time down in Florida for a few days, according to various reports. And not only that, but she also seems to be growing quite close to Tyler's best friend and roommate, Matt James, who was cast as one of Clare Crawley's Bachelorette contestants.

A source reportedly told E! News that the Dancing With the Stars champion was spotted at the Palm Beach International Airport over the weekend with Tyler, who apparently loaded her suitcase into his car. "Tyler and Hannah seemed genuinely happy to see each other," the insider told the outlet. "They were very comfortable together, and their interactions seemed very friendly, natural and genuine." Though in case you're wondering if this means the two of them have decided to give their relationship another try, the source also claimed that their reunion seemed more platonic. "Things didn't appear romantic," the source said. "There was no PDA."

That doesn't necessarily rule out any hope of Tyler and Hannah getting back together, but if that's something that's currently on their minds, they're opting to keep that information private for the time being.

Hannah B. herself provided proof of her recent Florida adventure by documenting her airport experience on one of her Instagram Stories, though she was careful not to mention who exactly she was going to visit. "I just missed my plane by maybe five minutes,” she said in one Instagram clip, as per People. “So now I’m stuck at the airport for a little bit.”

But it seems she inevitably made it to her final destination and spent some of her time there getting close to Tyler's BFF, who was also in Florida at the same time. Matt even posted a photo of them bonding (quite literally) on Instagram, which features the two of them hanging out by the water in their swimsuits. Perhaps she was giving him a few pointers for his upcoming Bachelorette experience — or maybe she's just trying to get to know all of the important people in Tyler's life.

This is the second time Hannah has recently visited Tyler in his hometown of Jupiter, Florida. Her first visit happened almost a week ago in the wake of his mother’s death. “It meant a lot to him that she came to support him in his time of need. He was able to show her around Jupiter, introduce her to his friends, and have some good laughs,” a source told People about Hannah's initial visit. “Just being able to hang out together, smile, and take his mind of things has been really helpful to Tyler’s grieving process. It’s just what he needed.”

Whether this ultimately leads to a reconciliation or not, it's clear that despite their heartbreaking breakup on The Bachelorette last year, Hannah and Tyler are still on their journey.

More like this
Hannah Ann Got Engaged 3 Years After 'The Bachelor' & The Proposal Was Dreamy
By Grace Wehniainen
'Bachelorette' Vet Clare Crawley Unveiled 2 Special Wedding Day Accessories
By Stephanie Topacio Long
10 Photos Of The Wildest Limo Arrivals From 'The Bachelor' Premiere
By Brad Witter
Zach Reveals The Chaotic 30 Minutes That Were Cut From ‘The Bachelor’ Premiere
By Grace Wehniainen
Get Even More From Bustle — Sign Up For The Newsletter
From hair trends to relationship advice, our daily newsletter has everything you need to sound like a person who’s on TikTok, even if you aren’t.