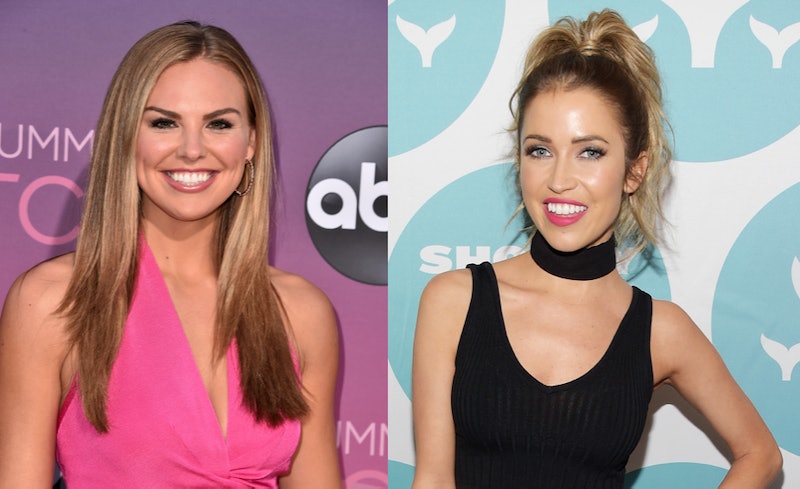 Whether you watch Dancing With The Stars or not, anyone invested in Bachelor Nation is pleased to know that Hannah Brown was cast for the upcoming season. It seems like Hannah is excited about the news, and she just got some support of another Bachelorette alum. Soon after DWTS announced its new cast, Kaitlyn Bristowe explained why Hannah’s DWTS casting is so important to both the women of the Bachelor franchise.

In an interview with Entertainment Tonight, Bristowe congratulated her fellow Bachelorette on the news. "I couldn't be more excited for Hannah Brown to compete this season on Dancing With the Stars," she said. "I've spoken out in the past about how Bachelorettes haven't gotten the same love as Bachelors when it comes to the chance to complete in the ballroom," she added, pointing out why this was such an important casting move. "The fact that it's finally happening again for a female franchise lead is long overdue... I will be watching, glass of wine in hand, and cheering her on."

As ET reported, several male leads of The Bachelor have been featured on the dancing competition show, including Sean Lowe, Nick Viall, Joe Amabile (aka "Grocery Store Joe"), Chris Soules, and Jake Pavelka. In comparison, only one other female lead from the Bachelorette franchise — Trista Sutter — has ever been on DWTS (and that was all the way back on Season 1), according to ET.

In 2017, Bristowe claimed that Bachelor creator Mike Fleiss stopped her from competing on Dancing with the Stars after her season of The Bachelorette in 2015. "Actually I was offered it, had the contract & Mike Fliess told me I wasn't allowed," she wrote in a tweet on Feb. 27, 2017. "He said he didn't want people wanting fame after his show." While the double standard was not lost on Bristowe, Fleiss responded via Twitter, writing, "@kaitlynbristowe has my total support if she wants to appear on DWTS!!! #TheBachelor." Bristowe responded with, ""Thanks I'll get right on that opportunity 2 yrs ago... I wonder what changed your mind?"

"I believe men and women should be afforded the same opportunities," Bristowe told ET in a statement at the time. "That has not been the case with The Bachelorettes and The Bachelors. I was told by Mike that [DWTS] is bad for his brand, and that he is sick of people wanting fame from his show."

Despite what happened in the past, Hannah's casting could pave the way for more Bachelorettes hitting the dance floor in the future. After the announcement of her casting, Brown shared with ET how excited she was to "continue sharing" herself and her life with everyone. "I think I was put into this position for some reason and I think people need to see people with this platform being really authentic and real and showing real emotions," she said. "And I don't know how to be anything other than that. And so I'm OK with it." She also said she was "tired of talking about my dating life," which is completely understandable.

With Bachelor Nation alums and fans behind her, it seems like Hannah B. has a good season of dancing ahead of her.