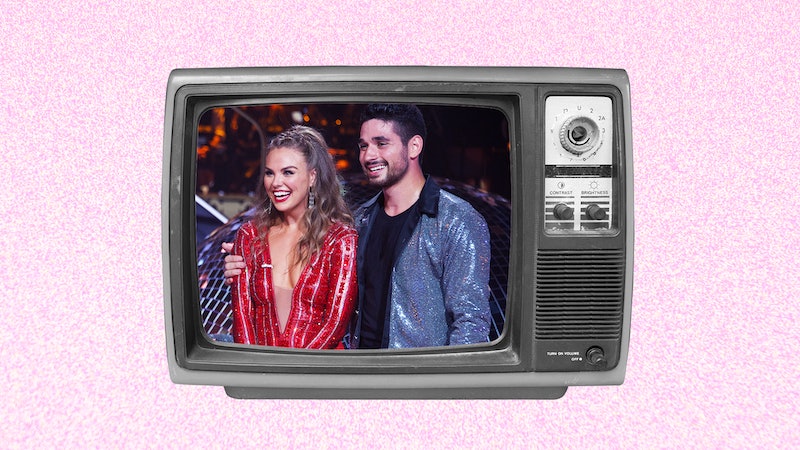 The race for the Mirror Ball is on once again in Season 28 of Dancing with the Stars, and this time, former Bachelorette Hannah Brown is taking the stage with her partner Alan Bersten. Monday night's premiere saw Hannah and Alan place second overall with their cha-cha to Whitney Houston's "I Wanna Dance With Somebody." But reading Hannah's diary of the five days leading up to their first performance, it's clear that their nearly flawless dance didn't come without a lot of hard work, a couple steak and egg burritos, and plenty of wardrobe adjustments. As part of Bustle's Behind Reality series, read on to find out what it's really like rehearsing to be a contestant on Dancing with the Stars.

I have practice six days a week from 9 a.m. to 1 p.m. I usually get up around 7:30, but I’m always tired. My boy Dave greets me — he’s our security guy at the studio, we’re like best friends. I feel like Dave has been a big part of these past few days for me. He’ll come in and watch my dance, he watches me get better and better each day.

We usually start out with eating a burrito together and coffee. We watch a lot of old videos of DWTS performances while getting ready for the show of other cha-chas that were good [for inspiration]. I want to be the best, but I want to see what’s been successful in the past. We don’t really start rehearsal until after 10. We usually start with stretching. My whole body is already hurting.

Right after practice, I have to go to a cold open shoot. I’m so gross, I’m kind of freaking out on the way there, because I’m pretty sure I stink, but oh, well. The poor hair and makeup ladies had to make me somehow not look like I ran a marathon and am now ready for a freaking cold open. But they did what they could. I’m pretty sure I still stunk, but it’s fine. They feed me lines on camera, but I’m not very good at people telling me what to say.

More practice. I’m in at 9, but I’m more of a 10 o’clock girl. I’m not a morning person, I’m not a night person, I’m just a mid-day person. Dave brought chocolate today!

I’m already starting to learn my second dance, since we had so long to practice the cha-cha before the first show. Usually it’s only six days or so to learn a new one. Alan has choreographed both of our dances so far. Usually I’ll watch one of our other girl pros do the dance with him, even though Alan is a pretty good girl it helps to have an actual female dancer show you and guide you through how it’s supposed to feel and look. Sometimes it’s Peta [Murgatroyd]. I love Peta. She has kind of taken me under her wing. She’ll always come in and help.

The hardest part is the mental part of it all. At this point, I know I can do all the steps, and I’ve learned those, but it’s not going to be perfect every single time, and I want it to be so badly, because I know I can do it. But I just get in my head and will think it’s bad even when Alan will be like “No, it was great,” I’ll be like, “No no, it wasn’t good enough.” I’m holding my own self back from having fun and enjoying the experience and doing it well.

So today I had a bit of an emotional breakdown. I just got off a whirlwind roller coaster, traumatic experience. I went straight off The Bachelorette to being on this show and really haven’t had time to process it, and so sometimes during practices those emotions come out in different ways. I started crying practicing with Alan and needed to get away from him, because we do get in pretty heated arguments where we don’t like each other and then we’re like best friends again. He didn’t watch the show, he doesn’t know what I’ve been through either, and we’ve had to work on communication a lot. Like a lot. We do not communicate the same way.

I’m just at a point right now where I’m kind of fragile with my emotions. I think a lot of the emotions that I’m having are not about the dancing. I’ve been through a lot. It’s not just my relationships, it's like my life is not what I thought I would be and I’m adjusting, I just moved to LA. I don’t know what life is gonna be like after this. What it is now, I’m not even sure. But I’m just trying to balance it all and sometimes I feel like I don’t even know how I’m doing this, if I’m really cut out for going back on national television and having to perform live when I’m having all these hot mess emotional breakdowns.

After practice, I just went home and chilled. I took a nap; I’m a nap queen.

Today’s an off day. You’re not allowed to practice more than six days in a row, but I still went in secretively to practice just twice. I just ran the cha-cha two times just to feel good about it, because Sunday we have camera blocking.

Then I went to a barbecue at Peta and Maks [Chmerkovskiy's] house, which was fun. Then I got in bed, because I’m the first one to go for camera blocking Sunday, so I have to start dancing at 7 a.m.!

For camera blocking you just kind of run the show, and get you to see the stage before Monday. The camera guys have to get different angles for what’s gonna look best with each dance, and we’re trying to get accustomed to the new stage. Everybody’s just trying to figure it out.

We did great, made the adjustments we needed to, even had a moment where sh*t hit the fan and Alan fell trying to help me up, and we still got on the music. Although it obviously wasn’t how we wanted it to go, I think it showed us that we still could get through it and got right back on music. I’ve been having a lot of pain in my body and went to the physical therapist, Gina, and realized my hip had slipped out of place and slipped up. I don’t really know how that’s affected my flexibility now. It was a long day.

I also had some last-minute fittings. I kind of have a big butt, but I have a smaller waist. Desirable, whatever, sure, but when you’re trying to get on Spandex with rhinestones, it’s not. And so they had to reconstruct my costume to put a zipper in because it was not going up and then it was too big in the waist. They realized that girl has some junk in the trunk.

It’s 6:35 a.m. and I’m headed to CBS studios to start the day of Dancing with the Stars premiere. I’m just shocked that this is what I am doing today. It’s been two really hard and long weeks but also really fulfilling weeks, and I’m just praying and knowing that when I perform tonight, everybody’s going to be able to see that and see my heart and see how hard I’ve worked.

I woke up pretty sore, so I’m nervous and can’t really kick my leg up, but my hip was affecting everything else, so I’m glad we fixed that. My body’s all freaked up. Everything hurts, but I’ve been putting in crazy hours and I just hope that everybody sees that tonight. I put my heart and soul into this because I need something to put my heart and soul into, to just move on. It’s been really hard. I want to be sharp but also dynamic with the music, to hit the steps right but just have fun, because I’m at the place where I can have fun. So I’m really nervous, but also really excited and just want to have my best performance tonight. Though this path feels very uncharted and I don’t understand it, I hope that tonight will give me peace to why I’m doing this. So there’s me, 9/16 at 6:38 a.m. about to head to the car. Here goes nothing!

More like this
Hannah Ann Got Engaged 3 Years After 'The Bachelor' & The Proposal Was Dreamy
By Grace Wehniainen
Kylie Jenner Clarified How To Pronounce Her Son's New Name
By Jake Viswanath
Erika Jayne's Estranged Husband Tom Girardi Has Been Indicted On Fraud Charges
By Jake Viswanath
'RHOSLC’s Heather & Whitney Are Still On A “Friendship Break” After Season 3 Reunion
By Jake Viswanath
Get Even More From Bustle — Sign Up For The Newsletter
From hair trends to relationship advice, our daily newsletter has everything you need to sound like a person who’s on TikTok, even if you aren’t.