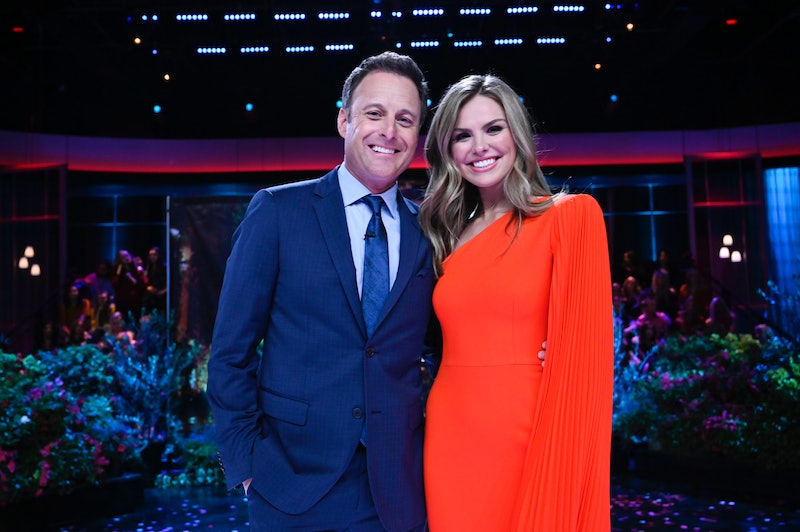 For Bachelor fans, this week has been a whirlwind. Not only did we find out what happened after Colton Underwood hopped the fence in Portugal, but we also got to see that he and Cassie are living happily ever after — and then there was that little announcement that Hannah B. is the next Bachelorette. And less than 24 hours after that news became official, there's been another major development. On Wednesday night on social media, ABC revealed Hannah B.'s Bachelorette contestants, and now we know the 33 men who will be competing for her heart.

The big reveal happened on the official Bachelorette Facebook, where they shared an album featuring photos of the men we could expect to see this season. "For the first time ever, we are giving you an early look at the men who may be on #TheBachelorette. Leave a [rose emoji] for who would get your first impression rose," the post said.

It's important to note that the post did say that these men "may" be on The Bachelorette, so there's a chance that these aren't necessarily the contestants who will be on the show, although Entertainment Tonight did report that they are — and it would make sense that they are Hannah's contestants, since they're in the album, cheesy Bachelorette school portraits and all. (Bustle reached out to ABC to verify whether these are the actual contestants, but did not receive an immediate response.)

It's pretty surprising that this is already happening, especially since this isn't how this traditionally happens — and Bachelor Nation is very much a universe built on tradition. But considering the fact that Hannah herself isn't exactly a traditional Bachelorette, maybe it's time for a few changes, and this is a pretty big one to start with.

Ready to meet the men? Here they are:

Chasen is 27 and from Longview, Washington.

Dustin is 30 and from Chicago, Illinois.

John Paul is 24 and from New Carrolton, Maryland.

Jonathan is 27 and from Los Angeles, California.

Kevin is 27 and from Manteno, Illinois.

Matt is 26 and from Los Gatos, California.

Matteo is 25 and from Atlanta, Georgia.

Mike is 31 and from San Antonio, Texas.

Thomas is 27 and from Southfield, Michigan.

Ben — who is pictured on the left — is 30 and from Charlotte, North Carolina.

Daron is 25 and from Atlanta, Georgia.

Tyler is 26 and from Jupiter, Florida.

Scott is 28 and from Chicago, Illinois.

Connor is 28 and from Newport Beach, California.

Joe is 27 and from Staten Island, New York.

Dylan is 24 and from San Diego, California.

Joey is 33 and from Bethesda, Maryland.

Devin is 27 and from Sherman Oaks, California.

Garrett is 27 and from Birmingham, Alabama

Interestingly enough, there are two guys named Matt D. This one is 31 and from Winter Springs, Florida

Jed is 25 and from Nashville, Tennessee.

Ryan is 25 and from Philadelphia, Pennsylvania.

Joe is 30 and from Chicago, Illinois.

Peter is 27 and from Westlake Village, California.

Hunter is 24 and from Westchester, California.

Luke is 24 and from Gainesville, Georgia.

Cameron is 30 and from Austin, Texas.

Tyler is 28 and from Boca Raton, Florida.

Brian is 30 and from Louisville, Kentucky.

Matt is 23, and from Newport Beach, California.

Grant is 30 from San Clemente, California.

Connor is 24 from Dallas, Texas.

Now that we know who Hannah B.'s contestants may be, all we have to do is wait for her premiere. Is it May 13 yet?