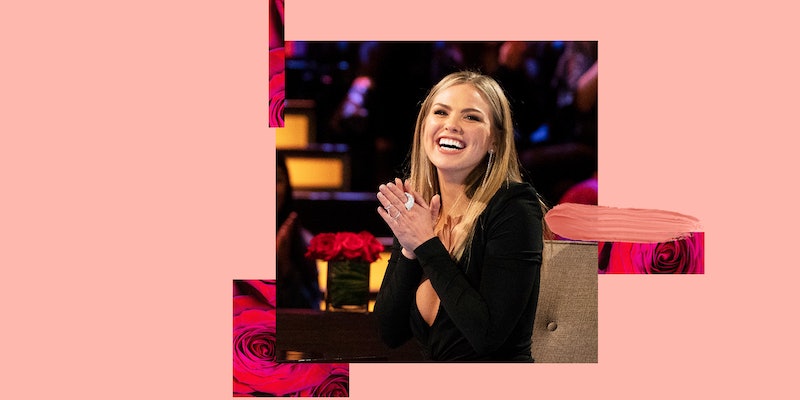 Well, Bachelor Nation, the moment you've been waiting for has finally arrived — Hannah B. is officially the next Bachelorette. She's the next in a long line of women to go on national television to try and find a man who's not looking to be an Instagram star but instead to get married. Yes, that man does (or probably does) exist. And, just like tradition dictates, Hannah B.'s Bachelorette season premiere date will come right before the season of sand, sun, hot dogs, and awkward tan lines. What a lovely way to spend the spring and part of summer, huh?

Isn't The Bachelorette always more fun than The Bachelor? After all, what's more hopeful than the beginning of summer? It's a time where we can plan trips, see friends, and enjoy endless margaritas. The days are longer. Summer Fridays happen. And, oh yeah — The Bachelorette airs. Every other season of The Bachelorette has premiered on or around Memorial Day Weekend, but ABC is giving our next Bachelorette season to Bachelor Nation a little earlier than usual — we can watch Hannah start to meet her men on May 13, 2019.

That means fans have just a little over two months to prep for Hannah to have an entire season of talking about her inner traumas, her pageant days, and her affinity for screaming "Roll Tide." Seriously, if you're an Auburn or Georgia Tech fan, you probably shouldn't apply to be on her show. Staying out of any college football allegiances or arguments is probably a good idea if you're joining the cast, actually.

Hannah was so cute and relatable when Chris Harrison announced that she was the next in line for the Bachelorette title. "I feel all the emotions, but honestly, I'm just really grateful for this opportunity," she told Bachelor Nation. "My family has been really supportive of me, and they've been really happy [about my decision]. They've made me who I am, and they trust me and love me."

Watching the video of Hannah learning that she won the title of Bachelorette was so lovely to watch, and she is just adorably nervous about the whole thing — Chris Harrison pulled the whole "you're going to meet five guys from your season right now" bit on Hannah, and she was very obviously flustered. Hannah's heart is definitely in the right place on this one.

She wants to find love — will it be with one of the first five men she met? It could be, especially because Chris let her give out her very first rose more than two months early. Colton's season of The Bachelor was such a mess that Bachelor producers are really trying to find a way to jazz up the next season of The Bachelorette. And it seems like its already working.

If audiences weren't ga-ga over Hannah from watching her on The Bachelorette, they certainly must be now. Hannah is a refreshingly real, media untrained, ready-for-some-fun kind of girl, and it will be both fun and entertaining to watch her try to find the love of her life.