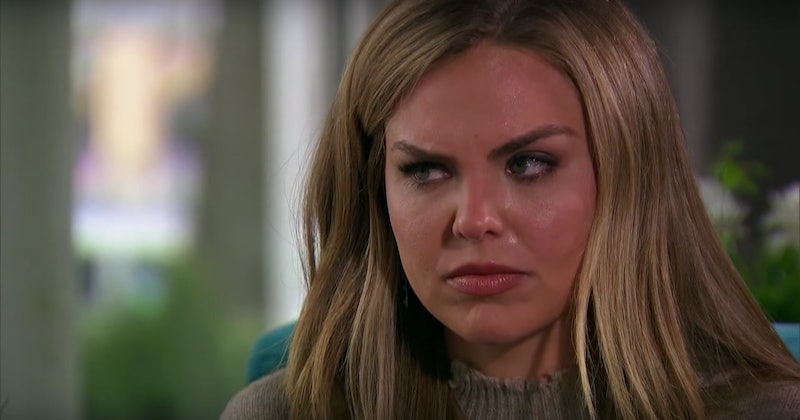 There may be one main antagonist in the Bachelorette mansion this season, but Hannah's reaction to the Luke P. drama shows that she's fed up with more than just him. Hannah asked Luke P. to leave on Monday night, and then he came back as if he was making some big romantic gesture, when he was really just disrespecting her wishes. It stirred the pot with Hannah and with the rest of the men, and before long, things escalated to a full-on debate as Hannah listened from down the hall.

Eventually, she reached her wits' end and let everyone know that Luke isn't the only issue she has. "Stop the focus on him, because I can figure that out for myself, and focus on me. I'm a grown ass woman, and I can decide if I want to spend my time figuring all this out, or if I don't," she told the room full of men. "You're not in my conversations with him, just like he's not in the conversation with all of you."

She didn't let Luke off the hook, though. "Luke, you need to stop making excuses. Just own up to the flaws you have and try to fix those," she said, adding to the other men that she's "not defending him in any way, because before any of you said anything to me about him, there were concerns."

The Bachelorette is always dramatic, but this season has been especially out of control. Between Luke P. vs. Luke S., Cam's strange "pity rose" situation, and the fact that one of her contestants came on the with a girlfriend still back at home, Hannah has had to deal with so many situation she shouldn't have. We would all be at the end of our ropes, too.

It must be incredibly frustrating to deal with a constant barrage of drama when she should be relaxing on dates, getting to know these men, and potentially figuring out who she wants to be with for the rest of her life. The Bachelorette should be stressful because she has to choose between men she cares about, not because she's ready to pull her hair out before she's even down to the final few.

Hopefully this is a wake-up call for Luke P. and the rest of the guys. Yes, Luke's the one creating the drama, but the other men are letting themselves get sucked into it right along with him when their focus should really be on Hannah. She deserves to be the center of attention for the entirety of the season, or at the very least to not have to play mediator to a bunch of grown men.

Bachelorette contestants, we are begging you. For Hannah's sake (and also kind of our own), please tone it down. It might seem impossible to stop Luke P. from getting under your skin, but it simply must be done. Hopefully at the end of this, Luke will just be a distant figure in your rearview mirror, and one of you will have a future with Hannah and only Hannah.