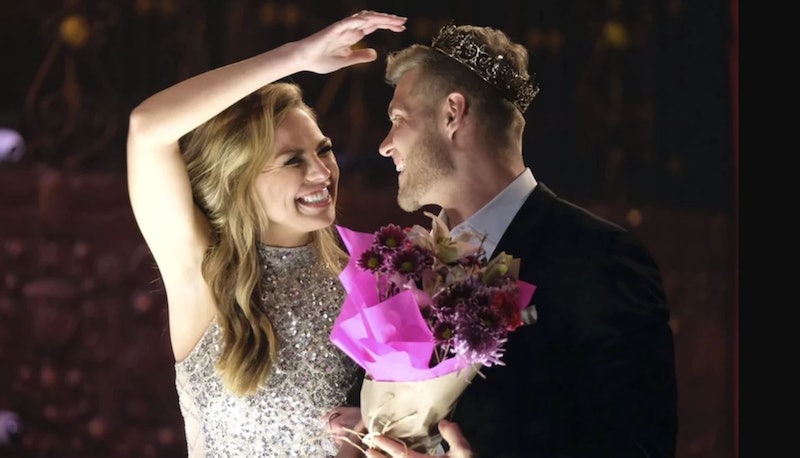 As incredible as Hannah Brown's season of The Bachelorette has been thus far, there is one storyline that doesn't sit right with a lot of fans: the Luke P. situation. If you do not understand why Hannah's so attracted to Luke P., then you and Bachelor alum Nick Viall are in the same boat. (And if you're like, "Hm, not sure why people are so wary of this guy who literally chucked one of his costars during a rugby match," please rewatch the first four episodes of Season 15 and then get back to me.) On a new episode of the Bachelor Nation icon's podcast, The Viall Files, The Bachelorette star explained why she was so immediately taken with Luke P. and why that feeling stuck around. The long and short of it: Attraction is a heck of a thing.

"He is a spark of something that I can see. He's like the brightest light out there and I don't know if the light is like a 'do not come here' caution light, or like the beacon. He shines, he's the brightest thing that’s attracting me right now."

She also said that her “instant connection” with Luke P. “reminded [her] a lot of [her] really long-term relationship and so it was this initial attraction of like, goo goo ga ga eyes.”

Hannah's touched on her chemistry with Luke P. before. After the world watched Luke P. tell Hannah he's falling in love with her after less than two episodes, Hannah told Extra that she "had mixed emotions about it," but she wasn't put off by it. "It’s no secret that there is initial attraction between Luke P. and that’s different than some of the other guys," she said. "I was excited to hear he had feelings for me.”

On the aforementioned episode of Nick's podcast, Hannah also said that when she senses there is a "light" in someone she has a connection with, she is inclined to give that person a chance. The current Bachelorette explained,

“If I think I see a light in somebody, and I think they’re actually a good person somewhere in there, there’s some goodness, so I’m gonna be the one that helps … I don’t ignore anything, ‘cause I say it out loud … And I don’t even make excuses. I’m just like, ‘No, I think this person is a good person. I’m going to make this person a good person.’”

Hannah also acknowledged how surreal being on a reality dating competition can be, pointing out that some contestants don't always act the way they would act in the "real world." She said,

"I think a lot of times in this, not just with Luke but with a lot of the guys, I try to give them the benefit of the doubt of, like, the weird that we're in. This is so hard, and like, hey you're kind of coming off like this, do you want to come off like this? Because this is what you're actually doing... You think that's what's happening, it's not. You actually are looking kind of crazy. So are you crazy or not? I'm gonna let you have another chance to see if you're actually crazy."

She is looking for love and looking out for the contestants. What a gem, that Hannah Beast.