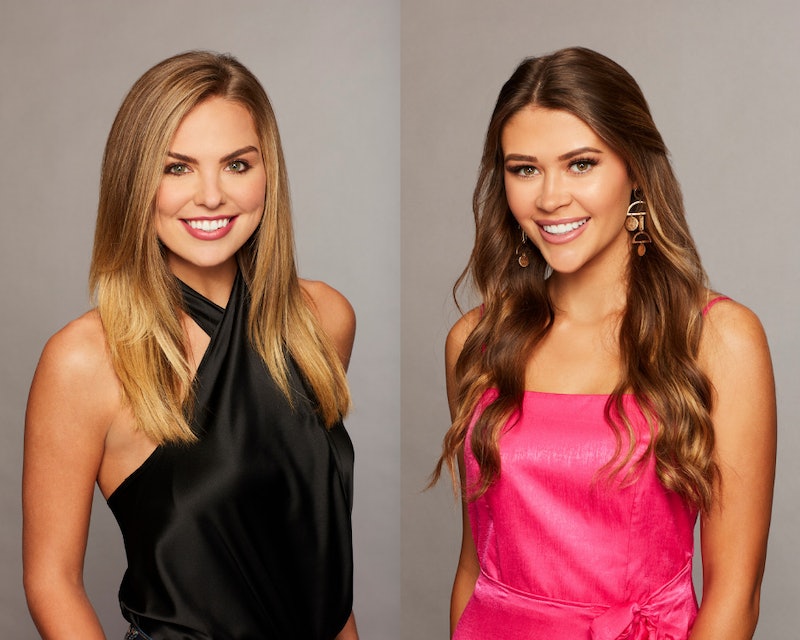 Just in case the usual bickering and heartbreak in the mansion wasn't enough, there is also pageant drama bubbling among a couple contestants this season on The Bachelor. Two of the women who have shown up for Colton are former pageant queens who apparently have a bit of a troubled past with one another. Hannah and Caelynn's pageant history before The Bachelor shows that they've gone head-to-head in the past, and didn't exactly come out on the other end as friends.

In the premiere, viewers learned that the pair knew each other, but didn't get much more information. But then in Week 2, Caelynn pulled back the curtain on what actually happened between her and Hannah:

“We’re not necessarily the best of friends. We were roommates at Miss USA. We were super close, and then she wasn’t happy that I was first runner-up. She was mad that she didn’t place, for sure. There were a lot of hurt feelings. With Hannah, there’s a façade and then it starts to crumble. Hannah kind of snapped; she flipped a switch. I was like, Wow, this is a whole new Hannah. Being in this environment [on The Bachelor], it’s pretty similar. I have no doubt that switch will be flipped soon. It happened pretty quickly.”

Hannah also said her piece, and her typically bubbly personality definitely seemed to dull a bit when discussing Caelynn. "It’s just so funny because there’s not one person in the world that I have a problem with, except her," Hannah said. "It totally scares me for Colton … she’s fake." Color me intrigued. The two are found on Instagram in photos together, Hannah as Miss Alabama and Caelynn as Miss North Carolina:

Caelynn posted this photo in late 2017, and it's not the only time Hannah shows up in her feed. Most recently, they were photographed together in April 2018:

Caelynn appears in Hannah's feed, too — a few times in relation to some Miss USA activity, but photos also show them just hanging out as pals as recently as February of last year.

But in the past 8 months or so, they definitely haven't shown up anywhere together. And if my search through each of their followers lists is correct, they don't even follow each other on Instagram anymore. Yikes.

So what exactly happened? It feels like whatever went down between the two of them runs deeper than one of them simply getting further in the Miss USA contest — that kind of thing is just the nature of the competition. (Per Vulture, Caelynn was first-runner up while Hannah didn't make the final round.) Especially if, as Caelynn said, they were roommates, it feels like a bigger rift must have come between them.

There are rumors about the apparent feud floating around Bachelor-focused message boards like the one on Reddit. Some speculate that the two women were close at first, but then a rift somehow started when Caelynn developed closer friendships with other women in the pageant circle.

Others have made their own judgments of Hannah and Caelynn's individual personalities, and have concoted their own ideas of what happened. Reality Steve, a blogger who digs up information on all Bachelor-related gossip, doesn't seem to buy Caelynn's idea that their friendship ended because Hannah was upset she beat her. In fact, he said he heard "quite the opposite."

These views should all be taken with a grain of salt — we can't really know who these women are, and none of us were around for the ups and downs of their friendship. It'd be great if the two women found a way to put their differences behind them during their time on the show — seeing women cultivate meaningful friendships and calmly work through their issues is way more refreshing than seeing another fight. But it is reality TV, and only time will tell if Hannah or Caelynn will set the record straight about why they can't seem to get along.