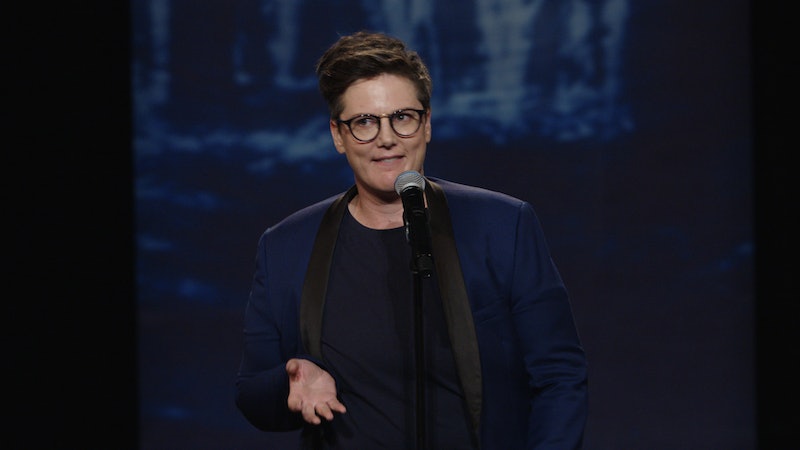 If you don't know Hannah Gadsby's name yet, you will soon. She's earning tons of praise for her commentary on topics like coming out and mental health. Hannah Gadsby's Netflix special Nanette is empowering for a number of reasons, and fans on Twitter have been quick to praise the comedian's work. Nanette premiered on Netflix on June 19. And since then, people haven't stopped singing their praises for the Australian comic. Gadsby has been a comedian for more than a decade and has won a number of awards in Edinburgh and Melbourne, but the Netflix special is getting plenty of attention in the United States, too.

In the beginning of the special, Gadsby explains that she felt she had to leave her home island of Tasmania when she realized she was a lesbian. Being gay was a literal crime in Tasmania until 1997, according to the Australia's ABC, which, as Gadsby points out, is "not long enough ago." The only thing she knew about LGBTQ people in Australia was from seeing news about the Sydney Gay and Lesbian Mardi Gras — Gadsby joked that she wasn't "good at gay," because she's more of a quiet tea drinker than a partier.

Gadsby's anecdotes about her experience resonated with plenty of fans, too. Twitter user @allisongallaghr tweeted that her story about watching the parade was "deeply relatable," while @RoAnnaSylver tweeted that Gadsby was "asking the real questions."

Gadsby also talks about the moment she came out to her mother, whose response was evidently to question why her daughter shared that detail with her at all. (Reportedly, Gadsby's mom said that she wouldn't want her daughter to know if she was a murderer, so she didn't want to know her daughter was a lesbian, either.) Her honesty about her past, including the unpleasant experiences and hate she received, has resonated with plenty of people, too.

One fan tweeted that Gadsby's standup special may be "the single greatest standup set ever."

Aside from the stories about her experience coming out, Gadsby also addresses the stigma around mental illness during her special. She talks about the danger in thinking that mental illness is connected to creativity, which is a common (and harmful) misconception. Apparently, an audience member came up to her after a standup set and told her she shouldn't take antidepressants, because artists should "feel"

"What do you honestly think?" Gadsby says in the special. "That creativity means you must suffer?" The comedian takes down the notion that there's a "burden of creativity" for artists, and her words are a good reminder that taking medications for mental illness doesn't make someone any less of themself.

Gadsby can now count some high-profile figures among her fans, too. Bad Feminist author Roxane Gay tweeted at Gadsby about Nanette, calling the Netflix special "brilliant." Gay tweeted that Nanette made her "think about humor, the self, self deprecation and the uses of anger" — that's a lot to consider for a special that's just over an hour long.

Kathy Griffin also tweeted that as someone who's been in the business for decades, she was "blown away" by Gadsby's Netflix special. And other comedians, including Jen Kirkman and Kristen Schaal, tweeted words of praise for Nanette, too.

Monica Lewinsky also counts herself among Gadsby's fans, sharing that she was able to attend the special's filming.

Gadsby's special is resonating with fans across the globe, and it seems to be moving people of all genders and sexual orientations. Nanette makes viewers think closely about things that might make them uncomfortable, and that's a good thing.

More like this
What Does Nancy Jo Sales Think Of 'The Real Bling Ring'?
By Arya Roshanian
Devi Is Going To Meet A “Smoldering Bad Boy” In ‘Never Have I Ever’ Season 4
By Jack Irvin and Gabrielle Bondi
Netflix Reveals First Look At Wednesday In The 'Addams Family' Spinoff Series
By Bustle Editors
Netflix's 'Bling Empire' Season 3 Trailer Includes A 'Selling Sunset' Cameo
By Kadin Burnett and Sam Ramsden
Get Even More From Bustle — Sign Up For The Newsletter