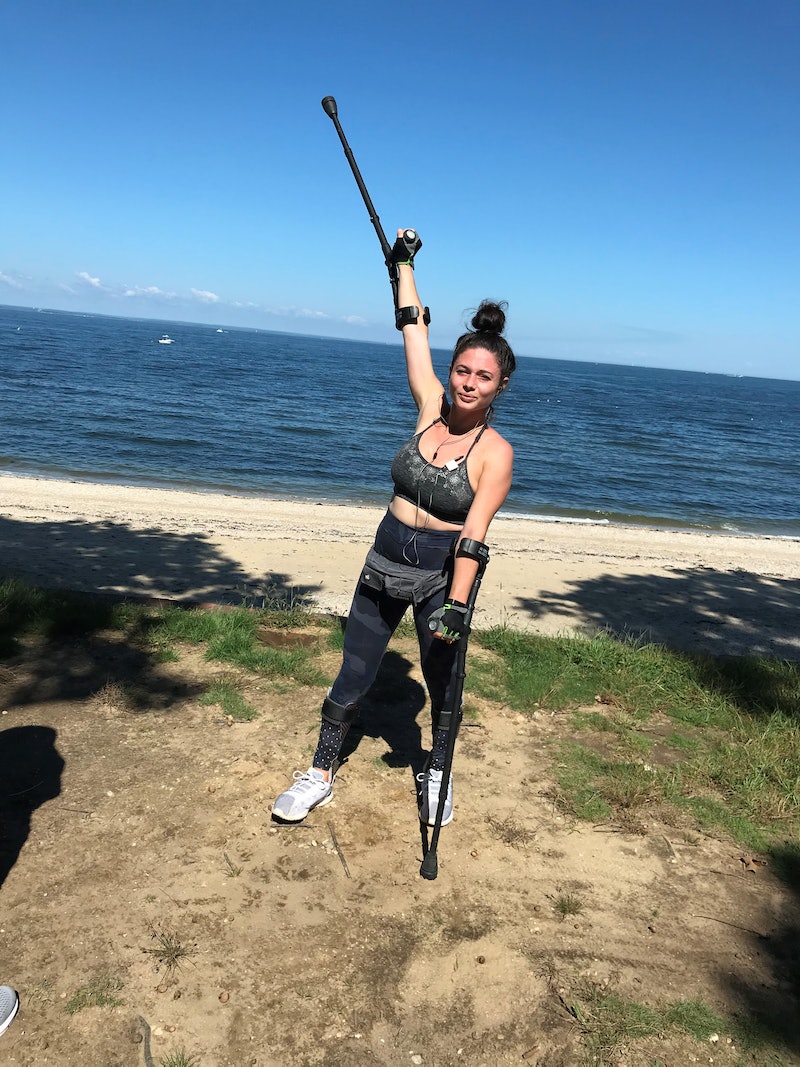 In 2016, Hannah Gavios was trying to escape a predator in Thailand and fell 150 feet off a cliff, leaving her paralyzed. Doctors weren’t sure if she'd be able to walk again. Now two years later, Gavios, 25, is training to crutch 26.2 miles in the TCS New York City Marathon on behalf of Team Reeve in efforts to raise money for spinal cord injury research.

Gavios is one of the 5.4 million Americans living with paralysis, something she says people don't fully understand. "I think when a lot of people see me and look at my leg braces they think I have leg injuries," she tells Bustle. "I don't think that spinal cord injury and paralysis is very well known. I think people assume there's something wrong with my legs without realizing the injury is placed in my back."

Inspired by a woman named Amanda who did the marathon on crutches last year, Gavios started her training at the end of March. "She crutched it last year and seeing that she was able to do it proved that I was able to do it as well," Gavios says. "And I just wanted to do it to spread awareness for spinal cord injury and get closer to a cure. My goal is to ultimately run again."

Gavios started off her training gradually, crutching for one hour, then two, and then after three she began recording her miles. She says the most difficult part of her training has been doing 18 miles, but Gavios isn't afraid of a challenge.

"Just doing any type of exercise or physical challenge helps me find peace."

"It's a lot of mental power and I have to constantly challenge myself," she says. "I try to maximize it as much as possible. I'll tell myself, let me just do 10 more blocks and then when I get to that point, then I'll decide I want to do 10 more, and then 10 more. A lot of it is doing little steps at a time rather than thinking big picture."

For inspiration, Gavios looks to others who are optimistic, especially those with their own injuries or limitations. "I follow this girl who was born without legs who skateboards," she says. "Just seeing how different people work with their challenges shows me how much I have to work with as well and how I could use that to my fullest potential. Also just doing any type of exercise or physical challenge helps me find peace — and it helps me find light at the end of the tunnel."

Gavios says chose the Christopher & Dana Reeve Foundation because it's the most established organization that researches spinal cord injury. "I think it's important to raise as much money for them so they could get closer and closer to a cure," she says. "Not just for myself, but for other people who are struggling with paralysis."

"It's not so dangerous to go out there in experience the world and do activities with paralysis as long as you know how to mange it."

While Gavios wishes more people knew that paralysis could happen to anyone, she also wants people to understand that those living with it can still function. "I don't want people to confuse paralysis with something debilitative such as a sprained ankle or a broken knee," she says. "We don't have to be coddled so much. ... It's not so dangerous to go out there in experience the world and do activities with paralysis as long as you know how to mange it. I think a lot of people worry it's dangerous for people with paralysis to be doing certain things. In a way, it's not as dangerous as doing something with an area that is still healing."

It's through experiencing the world and physical activities that Gavios stays confident, even during her intense marathon training.

"When I show myself I can crutch 18 miles," Gavios says, "that gives me a boost of confidence to know that I have something to be proud of."

You can donate to Gavios' fundraising page through Team Reeve here.