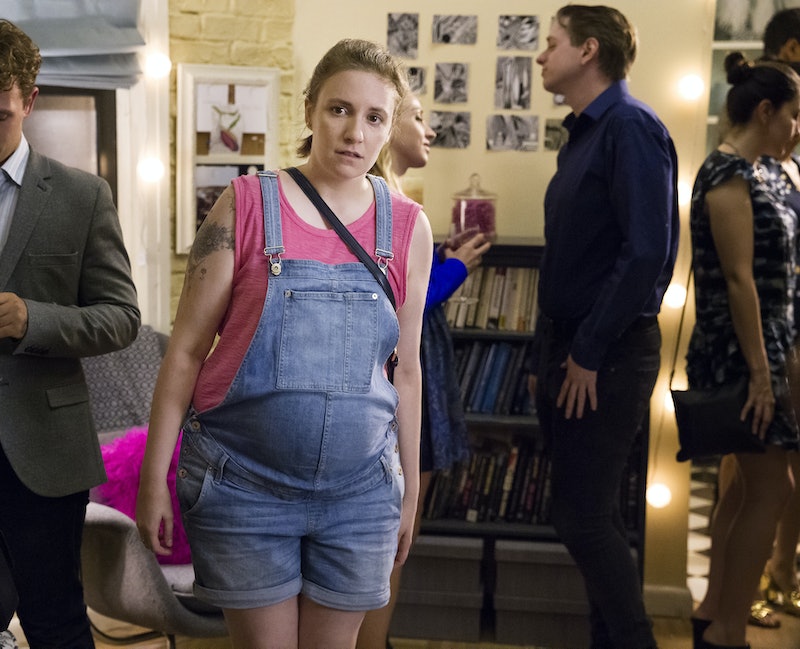 With Girls on the way to its series finale, there's only so much time left for the show to be a lightening rod. Hannah Horvath's pregnancy was a surprising part of Girls' final season, but the same way it led the character to some long-awaited maturity, it also showed how much perspective the writing and filmmaking has gained since its first few seasons. But there's one aspect of motherhood that Hannah has not addressed, and even though it's a small thing, it still stands out — Hannah's child will be mixed race, and yet it hasn't been mentioned, addressed, or even hinted at by her as a relevant piece of information about her unplanned pregnancy. Paul-Louis' ethnic background isn't explicitly identified, but Riz Ahmed, who plays him, is Pakistani-British.

And don't get me wrong: I'm not surprised that Hannah herself has no idea that her mixed child could present some unique childrearing challenges. But that's Hannah, right? Well-meaning and clueless, right to the end, with not even impending motherhood able to truly shake her core of privileged whiteness. I wouldn't expect anything else. Where I'm a little disappointed is that the show never chose to use this as one of the many examples of how Hannah is currently unprepared for motherhood, and will need to leave her myopic point of view behind if she hopes to mature. It could have been a really interesting irony: TV's prototypical White Girl is having a mixed race baby. Finally, a person of color in Hannah's life that she can't help but see as a full, complete human being.

Girls has played with themes like this before — look at Hannah's struggle to accept her father's late-in-life admission that he is gay, despite her obvious support of gay rights. So too, could Hannah's child illuminate how her relatively accepting colorblindness won't cut it when she has a child who is from a different racial background than hers. She'll need to do some reading. She'll need to think about her privilege. It's all part of growing up and becoming a responsible parent.

But perhaps representation just wasn't ever going to be a priority. After the overwhelmingly monochromatic first season, Girls cast Donald Glover as Sandy the Black Republican, its first stab at a major nonwhite character. After that slightly awkward first step, the show has reached out to more actors of color, but their racial or ethnic identities have never been particularly integral to their character or how they see the world. Sure, Jessica Williams brought a little world-weariness to her role as Hannah's GQ colleague, and Elijah's Season 6 audition spirit guide, Athena Dante (Latisha Di Venuto) was certainly racialized, in a stereotypical "sassy black friend" kind of way.

But usually, these guest stars or minor characters are just folded into the background of a scene, with as little attention paid to their race as the lead Girls are paying attention to them at all — a parade of cashiers, coworkers, cab drivers, and pedestrians that only exist for as long as their lives interact with the primary cast. As the person who will quickly become the most important in her life, Hannah's child was an opportunity to show something a little different. And there was even a perfect moment to remind the audience of this: When Dill Harcourt took solace in Hannah and Elijah's apartment after his "white baby" adoption controversy, it could have been fascinating to see Hannah, in some part of her mind, register that her baby won't really be white. Just a small moment to this effect would have made a big difference.

And despite some truly shockingly bad hot takes published in the New York Times, mixed race children aren't born with an innate understanding of the complexity of race relations, nor are children a mechanism to teach their parent a lesson. Girls has rather pointedly examined other ways in which Hannah is wrong to think having a child will immediately change her — she didn't instantly become financially responsible, she still eating cereal and candy in every episode, and she has the same love of shorteralls.

And over the course of six seasons, the show has gone from lovingly, indulgently presenting these details, to a slightly more detached wryness. In the pilot episode, one of the reasons Hannah's proclamation that she might be "a voice, of a generation" was so often mistaken for a genuine belief of the show was because the moment was shot with a slightly triumphant air. Now, Hannah, Marnie, Jessa, and, occasionally, Shoshanna's flights of fancy are more likely to be punctuated with a wry filmmaking or writing choice. Girls could — and, in the series finale, still might — have done the same about the race of Hannah's baby.