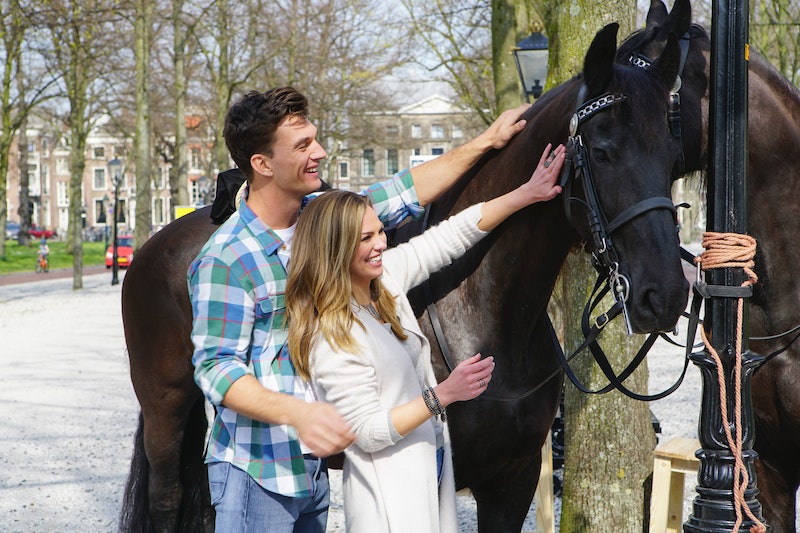 Hannah B. has come a long way since fans first met her on The Bachelor, and Monday night's episode offered up plenty of proof. In fact, Hannah and Tyler C.'s date on The Bachelorette really brought her experience in the franchise full circle — particularly because of one detail you might have missed. On Hannah and Tyler's latest one-on-one date, they spent their day in the Netherlands riding horses and having pretty serious conversations about the more personal areas of their lives. As we've seen all season long, Hannah and Tyler do seem to have one of the strongest connections, but that's not what jumped out about their date. Instead, it was all about Hannah's growth since The Bachelor.

As the following tweet pointed out, Hannah's first one-on-one date with Colton Underwood was spent horseback riding, similar to her activity with Tyler. But back then, she'd seemed nervous, and Colton didn't like that she wasn't able to open up to him. But on The Bachelorette, it was almost like the complete opposite scenario — she was confident, she was the one in control, and it was hard to believe that this was the same person we met on Colton's season earlier this year.

Instead of not opening up to Tyler, Hannah was the one trying to get him to open up to her, which she's really emphasized with all of her contestants this season. Even though Hannah may not have been able to get real about her feelings so quickly after meeting Colton, it seems like she's truly dedicated herself to the process and has made herself vulnerable with these men without holding back. She's even gotten much better at toasts! Besides, it makes sense that she's expecting more openness from them when hometown dates are right around the corner.

Seeing Hannah communicate so openly with Tyler really did show how much she's changed since The Bachelor... and how much she hasn't. She was willing to try the pickled herring, even though Tyler was a bit grossed out by it, just like she was willing to eat the bugs on The Bachelor. She's always up for an adventure, and now, it seems like she has finally broken free from everything that may have been holding her back during the beginning of her time on The Bachelor. It makes her a genuinely compelling lead to watch, and it's interesting to see how her openness continues the closer she gets to deciding which of these men she wants to spend the rest of her life with.

And you know what? Good for Hannah for coming so far since her Bachelor days. It's never easy to be fully yourself during a vulnerable experience like falling in love, and it has to be even more difficult when it's happening in front of the world in front of a horde of cameras. But so far, Hannah is killing it, and it seems like being on the Bachelor/ette franchise has truly been a positive experience for her.