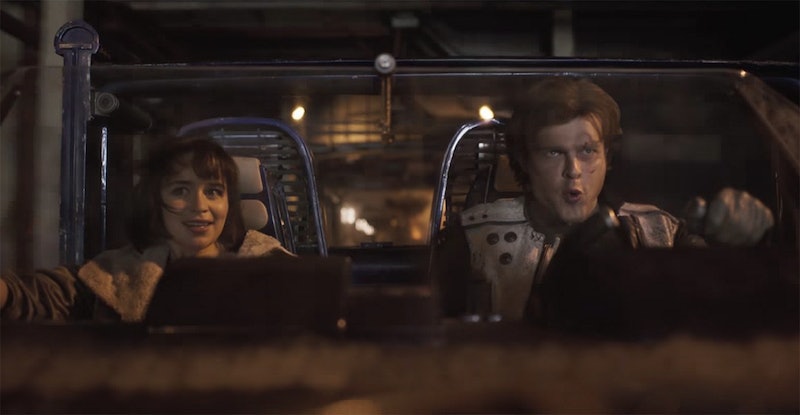 They first appeared to eagle-eyed superfans in A New Hope, and capped one of the more heartbreaking moments in The Last Jedi. Rumor has it they won the ship that beat the Kessel Run in 14 parsecs, and they make an appearance in the upcoming Solo: A Star Wars Story. But just what are Han's dice in Star Wars, and how do they fit in to the overall universe?

If you have no idea what dice are being referred to here, it's understandable — until the most recent Star Wars movies, the dice are just a barely-visible detail from a single scene in the first trilogy. In A New Hope, the dice are briefly seen dangling from the front of the Millennium Falcon's windows, two normal-sized gold dice that Chewie bumps his head against as he ducks into the passenger seat.

In Solo, though, the dice are front and center, and they're bound to make even superfans wonder if they have special meaning beyond simply being a cool car decoration. One popular theory claims the dice are a nod to George Lucas and Han Solo actor Harrison Ford's previous collaboration American Graffiti, which features plenty of big cars in an era of big, fuzzy dice dangling from the rearview. But in that film, Ford's character has a far more menacing skull dangling from his car. Still, Star Wars set decorator Roger Christian wrote in his biography that he was inspired by Graffiti, but found the skull "too rock and roll" for the space opera. And so it was dice that ended up dangling in the Falcon, if briefly.

Official Lucasfilm lore from the mouth of Creative Executive Pablo Hildago, “keeper of all arcane details of Star Wars,” according to a Vanity Fair interview, confirmed that the dice are more than just a decorative touch. Hidalgo said they were used in a game of Corellian Spike, and "rumor has it Han won the Millennium Falcon [from Lando Calrissian] with those dice. Whether or not that’s just bar talk, I can’t say.”

Now, with Solo: A Star Wars Story hitting theaters, fans get to see the dice in action. In the official trailer for the film, they're seen dangling from the rearview of Solo's landspeeder as he races away with Qi'ra, a new character who has a long history with Han. In Entertainment Weekly's interview with Emilia Clarke, who plays Qi'ra, the actor said that Qi'ra and Han grew up together on the streets, explaining, "the whole way through, she is surviving. And surviving in the underworld that we know to be [filled with] smuggling, aloof gamblers, wrong-side-of-the-tracks nasty ones."

The current fan theory she's the one who lends Han the dice to play with would make sense; she's surrounded by gambling and would want to help an old friend. A recently released promo for the movie, from no less than Twitter user Sad Kylo Ren, shows them dangling from her wrist, implying a direct connection.

And what about that fateful game? When Solo and Lando Calrissian meet up in Cloud City in Empire Strikes Back, Calrissian exclaims, "What have you done to my ship?" Solo retorts, "Your ship? Hey, remember, you lost her to me fair and square." In an exclusive Solo clip shown at CinemaCon, Lando and Han meet for the first time in a dingy gambling den, with Qi'ra noting Calrissian won his last ship in a card game.

The clip ends on a tease, with both men betting their (distinctly unnamed) ships, and Lando warning Han, "You might want to quit while you're ahead." And though they're playing cards, the game, called sabacc in the Star Wars universe, has many variants, including one called Corellian Spike that involves... yep, you guessed it - two dice in addition to the cards. Clearly, both Han and Lando play for keeps, and it makes total sense that the gold dice get to see some action in Solo.

More like this
Everything To Know About 'The Hunger Games' Prequel Movie
By Grace Wehniainen and Radhika Menon
Jennifer Coolidge Just Said The Most Controversial Thing About Legally Blonde’s “Bend & Snap”
By Maxine Harrison
Revisit 1992’s 'A League Of Their Own Cast' Photos After The New TV Series
By Grace Wehniainen
Taylor Swift Wanted To Be In 'Twilight: New Moon,' According To Its Director
By Grace Wehniainen
Get Even More From Bustle — Sign Up For The Newsletter