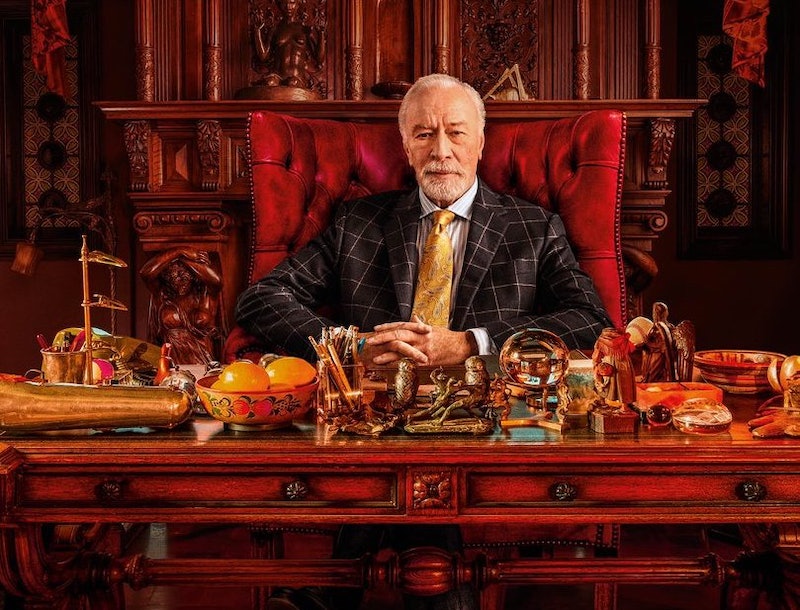 The star-studded murder mystery Knives Out centers on the fractious Thrombey clan, who attend the 85th birthday party of author and patriarch Harlan (Christopher Plummer) at his remote mansion — only to discover him dead in his study by morning. Plenty of secrets are uncovered as famous detective Benoit Blanc (Daniel Craig doing a Southern accent) looks into the case, but here's one mystery we'll solve right now: is Harlan Thrombey from Knives Out based on a real author?

Taking a closer look at the trailer, we learn a few things. Harlan is an internationally famous mystery writer with hundreds of beloved titles. He has three children and a handful of grandchildren. Now look closer at the typeface used for the film's title for your first clue: it's an awfully close match for the one used on the Pocket Books edition of Agatha Christie books.

So could Thrombey be based on Christie, one of the most acclaimed mystery authors of all time? Director Rian Johnson does seem to be a fan of her work, as he's mentioned on Twitter and in interviews. There are of course some discrepancies with the theory, including that Christie is a woman, and she had only one child (instead of Harlan's three). She also resided in Winterbrook House for most of her life, an extremely modest abode compared to Harlan's lavish mansion. While not a perfect fit, it's pretty clear that if Thrombey wasn't entirely based on Christie, Knives Out was certainly intended as tribute to her in some capacity.

Another possible contender for inspiration comes from Rian Johnson's own words about Harlan. When introducing the cast of Knives Out to Games Radar, Johnson described Harlan as "kind of like the Stephen King of mystery novelists. He’s very successful, and the whole family is sort of under his umbrella as the patriarch." While the authors may have success and a love of over-the-top living spaces in common (King's house in Bangor, Maine, is easily identifiable by an ornate gate of bats and spiders, similar in flair to Harlan's circle of knives pointing towards his writing desk) one element where King and Thrombey are polar opposites is in their family relationships. Unlike the Thrombeys, who treat aggressive infighting as the norm, the Kings seem very supportive of each other. And unlike Thrombey siblings Linda (Jamie Lee Curtis), who went into real estate, or younger brother Walt (Michael Shannon), who took over as CEO of his father's publishing company, the Kings nearly all kept it creative. King has five writers in the family, including wife Tabby and sons Owen and Joseph (who writes under the name Joe Hill).

While it doesn't appear that Harlan was based on one single specific person, the idea of a personable and powerful patriarch surrounded by suspect family members is a classic mystery setup, and one Johnson exploits with the care of someone who's clearly a fan of the genre.