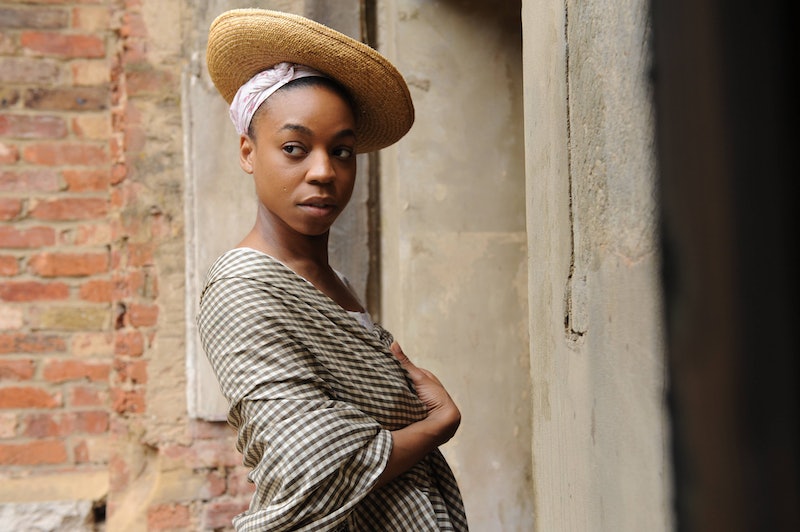 The first two episodes of Harlots introduced the audience to two houses definitely not alike in dignity, but by Episode 3 the world of Georgian London in the Hulu series has started to expand. Lucy Wells went on an unpleasant country getaway, meanwhile Margaret hired Harriet Lennox on Harlots in an attempt to unite her unconventional family. Once again, women have to work together on this show if they want to make it in a society that does not support them.

Nathanial Lennox was introduced in the episode before, as a client showing American tourists around town. He harbored some past feelings for Margaret, it seems. In Episode 3, however, he was already on his death bed. Harriet came to fetch Ms. Wells, but by the time they got back to the house it was too late. A former slave, Nathanial had given her freedom papers. While people in London and in the house addressed her as Mrs. Lennox, they were not legally married. Her two children were legally "illegitimate," according to societal standards at the time. With their father gone and his young adult son sneering over them, the family's status was thrown into chaos.

Without pausing, Margaret encouraged Harriet to forge legal provisions for herself and her children before Nathanial's heir returned... but they were too late there as well. Benjamin kicked the women out of the dead man's room. Later, he revealed his devious plan for his father's new family. Harriet was allowed to keep her freedom, but the children were to be sent to the family plantation. This storyline, while only tangentially connected to the 18th century sex industry, shows other ways in which women — this time women of color — were without rights and forced to work around an oppressive system.

Luckily, Harriet and Margaret are not giving up. Margaret posited that if the children were slaves now, they could be bought back. She hired Harriet to run her new house so that together they could restore her family. It's just another way that Margaret is committed to helping other women — unlike Lydia Quigley and Florence Scanwell, who are ruthless in their attempts to tear down Margaret's business. If only the religious Scanwell family what Lydia does to other girls too, often against their will.

While Harlots has done an excellent job portraying a diverse London with multiple free people of color, slavery was still a big part of society and the economy in 1763. It's an unavoidable issue, however, Harlots is making a smart choice with Harriet's story, in my opinion. She has societal constraints, but her own agency as a character. Margaret is able to help and offers her advice, but this story is ultimately being told from Harriet's point of view. I can't wait to see how this story and this partnership will continue on Harlots.