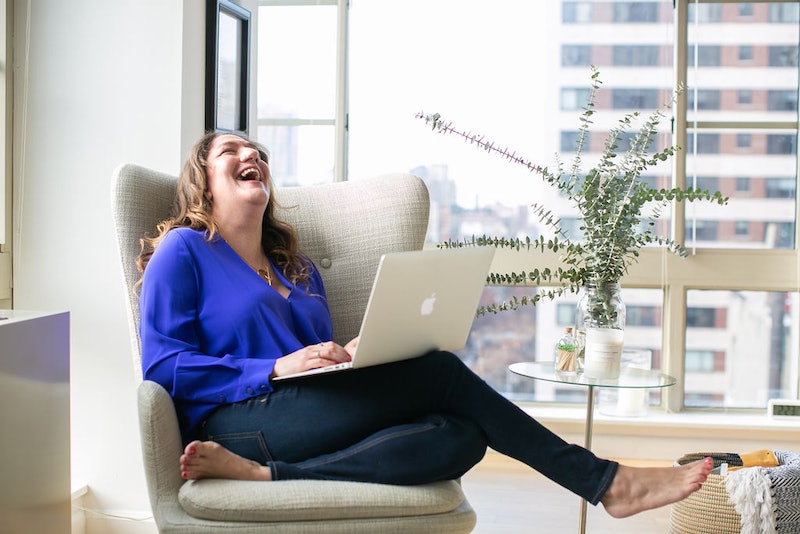 One day in 2011, Harper Spero was walking in New York City when she felt like she was going to collapse. The then-27 year old could barely make it up the two flights of stairs to reach her West Village apartment without gasping for breath.

"I went to my general practitioner who told me I had bronchitis, and then pneumonia. She gave me drugs and inhalers — absolutely nothing was working. After three months, I went to a specialist who found a cyst the size of a golf ball in my right lung," Spero, creator and host of the podcast Made Visible, tells Bustle.

The symptoms and cyst were related to hyper IgE, also called Job Syndrome or Job's Syndrome, a rare disease Spero, now 34, was diagnosed with when she was 10 years old. She recalls her mom taking her to dozens of doctors, holistic practitioners, healers, and nutritionists. But no one could provide Spero and her mom with an explanation for her persistent skin and lung infections.

"Finally, I went to an immunologist who diagnosed me, but because it was so rare, she didn't have many answers or solutions for me. It was good to have a name to identify what I was dealing with but it wasn't the type of condition I could go Google (not that Google existed then!) and learn more about," she says.

Job's syndrome is a genetic immunodeficiency disorder so rare it affects fewer than 1 million people globally. Those with Job's Syndrome are more likely to experience skin and lung infections, broken bones, and dental problems than people who don't have the syndrome.

Growing up, Spero had almost constant skin and lung infections, and says she was so physically and emotionally uncomfortable in her own skin that she wore long sleeve shirts in the summer to hide the eczema on her arms. "I hated the body I was in and tried so hard to hide it with clothing and makeup," she says.

Because she felt ashamed of being different, she says she didn't tell anyone about her disease. But all of that changed in 2011 when her health scare made her realize she could no longer hide her condition. Although surgery to remove the cyst on her lung was risky because of her compromised immune system, Spero was told it was her best chance at survival. It's also when she says she decided she had to open up to the people in her life about what she'd been living with in secret since she was a child.

"I’ll never forget the day I decided to have surgery, and I was pacing around a store trying to draft an email to my best friends to let them know what was going on with my health," she says. "They had known me for five to 10 years and knew nothing about my health. I couldn’t figure out how to explain this to them, because I was so uncomfortable sharing this part of me."

Despite initially being afraid to disclose her illness, Spero calls the experience "extremely freeing." She says: "I hid my health for 27 years of my life, all because I was afraid of the response. Now that I’ve shared, it’s clear how much it’s helped other people become more open and realize they’re not alone either."

The positive feedback she received from friends and family after opening up about her struggles inspired the business coach, who previously worked in social media, to start Made Visible in 2018, a podcast that gives a voice to people who are living with invisible illnesses. The response, she says, has been overwhelming in the best way possible.

"I never could have imagined that the response would be what it’s been. Getting 'fan mail' and direct messages from listeners on Instagram is the most thrilling thing when you’re discussing a topic that is not being addressed enough in the world," says Spero.

"Having conversations with people who are living with other invisible illnesses has shown me the different ways people — many of whom are extremely empowered and discuss the importance of being your own advocate — handle their health."

In addition, she says she also hears from people who don't have an invisible illness about how the podcast is helping them recognize the importance of asking questions and learning more about what other people are going through. It also serves as a resource for those who know someone with an invisible illness.

"There is not a lot of content out there for caregivers and friends and family members of those living with invisible illnesses," Spero says. "One of my goals is to help educate people on what’s helpful and what’s definitely not helpful when it comes to navigating invisible illnesses."

After spending 27 years of her life living with a secret, Spero wants people to know they don't have to carry the weight by themselves. Just because people can't see you're struggling just by looking at you, that doesn't mean your illness is not real. And you have nothing to be ashamed of by making yourself and your journey visible.

"Know you’re not alone," Spero says. "There is someone out there for you to connect with who will get you whether they have your condition or not."