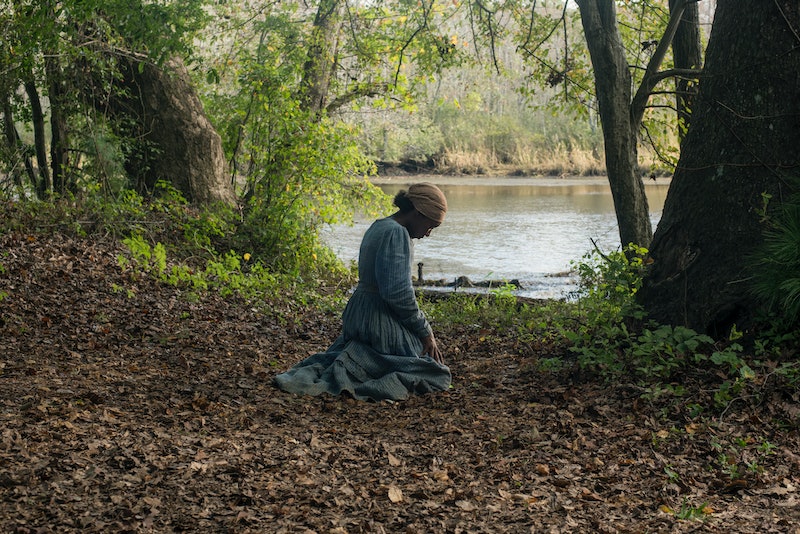 The Harriet Tubman biopic Harriet (out Nov. 1) follows the iconic abolitionist's life from the time right before she runs away to freedom up to the Civil War. And while audiences should be familiar with at least parts of her story that go beyond the content of their history textbooks, the film focuses on a particular element of Tubman's life that may surprise some viewers. It's been documented that Harriet Tubman had visions that she believed were god's way of telling her about events before they happened.

In the film, Harriet (Cynthia Erivo) explains that the visions began after she got a head injury while trying to protect another slave from their owner. This is accurate. According to History, at age 12, Tubman saw an overseer about to throw a heavy weight at a fugitive slave and stepped in front of them, so that the weight hit her. After that, she began to go into sleep-like states during the day, and during these episodes and in her dreams at night, she felt god came to her to give her warnings, including ones about her family members being sold to other slave owners.

"[The visions are] very much a part of Harriet Tubman. She talked about it a lot," Harriet director and co-writer Kasi Lemmons tells Bustle at the New York press junket for the film. Lemmons researched the visions in depth for her film and found numerous instances in which Tubman said she knew about things before they occurred. "She’d say, for instance, I saw a dark cloud hanging over my brothers and knew that they were about to be sold," the filmmaker explains.

Lemmons notes two other instances of premonition that Tubman felt certain about. "She was friends with John Brown, and he really was desperate for her to join him at Harpers Ferry, and she had a vision that he was going to be cut down and she didn't go," the filmmaker says. After Brown led a violent anti-slavery 1859 raid on Harpers Ferry, he was hanged for treason.

Similarly, Tubman said she had a vision about of the end of slavery in the U.S. a couple of years before the Emancipation Proclamation. "She woke up from the vision and said to her abolitionist friend, 'My people are free!'" Lemmons explains. "And her friend said, 'My dear, not in our lifetime.' And Harriet said, 'No, god just showed me. My people are free.' To the point where, when the Emancipation Proclamation happened and people were celebrating, her friend said to her, 'Why aren't you celebrating?' [Tubman] said, 'I celebrated two years ago.'"

The same story is recounted in Harriet: The Moses of Her People, an 1886 biography by Sarah H. Bradford that features interviews with Tubman. According to the account in the book, Tubman said, "I had my jubilee three years ago. I rejoiced all I could den; I can't rejoice no more."

In her research, Lemmons says she found that there were other friends and acquaintances in Tubman's life who doubted her ability to see the future. "'Well, I don't know if I believe everything, but I know she believes it,'" is how the filmmaker sums up the position of most people who knew Tubman. Lemmons also notes that Tubman supposedly knew other people who received visions, "who were like kindred spirits in that way."

The visions weren't the only powerful spiritual connection that Tubman believed she had with her god. As Lemmons notes, Tubman's owner, Edward Brodess died a week after she "cursed him." Another of Bradford's biographies, Scenes From the Life of Harriet Tubman, explains that Tubman prayed that Brodess would change his mind about selling her away from the rest of her family, and eventually, she prayed that if his mind couldn't be changed that he should die. This also plays out in the film.

So much is known about Tubman and about her visions thanks to writers and fellow abolitionists, who kept track of her history, but also thanks to Tubman herself. Lemmons explains that Tubman would hold events where she would tell her story to raise money for the cause. Thanks to these accounts, the filmmaker was able to refer to Tubman's own words to cinematically represent the visions that assisted Tubman in freeing herself and so many others.

More like this
Theo James Would “Love” To Star In George Michael Biopic
By Sam Ramsden
Adam Lambert Called Out The George Michael Biopic Over Potential Casting
By Sam Ramsden
You’ll Definitely Recognise The Stars Of Amy Winehouse’s Biopic
By Maxine Harrison
Owen Thiele Asked Sundance Attendees About Films That Don’t Exist
By Grace Wehniainen
Get Even More From Bustle — Sign Up For The Newsletter
From hair trends to relationship advice, our daily newsletter has everything you need to sound like a person who’s on TikTok, even if you aren’t.