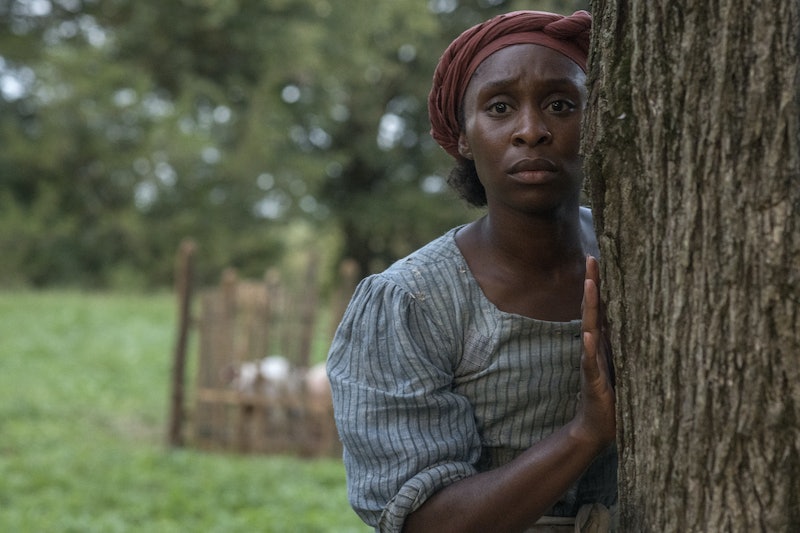 Many have read about Harriet Tubman in school, but soon, they'll be able to see the freedom fighter on the big screen. Cynthia Erivo is Harriet Tubman in the new film, Harriet, in theaters November 1. And the first trailer for the Harriet Tubman film gives a closer look at her journey from slave to American hero.

The trailer for the film, directed by Kasi Lemmons, begins with Tubman, who was born into slavery, running for her life. "Follow that north star," she is told. "If there's no stars, follow the river." When Tubman comes to the end of the river, with slave owners hot on her heels, though, she makes a choice that leads to her freedom. "I'm gonna be free or die," she says before jumping off a bridge to get away from her would-be captors. In the end, she would travel "100 miles to freedom all by herself."

That right there would be enough to warrant a film, but as everyone knows, Tubman's story didn't end there. Oh no, Tubman, who chose that name — a combination of her mother's first name and husband, John Tubman's last name — to mark her independence, didn't just want freedom for herself, she wanted it for others, too. So she fought to free hundreds of slaves using the Underground Railroad, a network of safe houses that helped move fugitive slaves to safety with help from abolitionists and free African Americans. "If I'm free, my family should be, too," she says in this trailer. "I made up my mind, I'm going back." Seriously, just give Erivo her Oscar now for this one, which marks her first starring role after supporting ones in Widows and Bad Times at the El Royale.

The film, which features Janelle Monáe and Joe Alwyn (aka Taylor Swift's boyfriend), gives a closer look at Tubman's courage to go back and risk her own life because she knew that others deserved to know freedom, too. "I would give every last drop of blood in my veins," Tubman says in the clip. "Until this monster called slavery is dead."

Tubman, the most famous of the Underground Railroad conductors, would free 300 slaves in ten years, taking 19 trips to the South, according to the Harriet Tubman Historical Society. Her achievements would lead to the nickname "Moses," given to her by the abolitionist William Lloyd Garrison. Later in her life, Tubman fought for women's suffrage before her death in 1913.

And the abolitionist is still fighting, this time for recognition. Tubman is supposed to replace Hamilton on the $20 bill in 2020, but last month it was announced that the new notes had been delayed by President Donald Trump. "The motivation for the Trump administration’s decision to delay the release of the new note has not been credibly explained," Senate Minority Leader Chuck Schumer told The Associated Press, "and the inspector general’s review must get to the bottom of this."

Harriet, the first biopic about Tubman, will hopefully, show others why she deserves to be recognized as the American hero she is.

More like this
Austin Butler Recalls Lisa Marie Presley Showing Him Elvis’ Bedroom
By Jake Viswanath
Pamela Anderson’s Dating & Marriage History Could Be Its Own TV Series
By Jake Viswanath
Owen Thiele Asked Sundance Attendees About Films That Don’t Exist
By Grace Wehniainen
Jennifer Coolidge Hunted For Jewels & Lashes In J.Lo’s Hotel Room
By Jake Viswanath
Get Even More From Bustle — Sign Up For The Newsletter
From hair trends to relationship advice, our daily newsletter has everything you need to sound like a person who’s on TikTok, even if you aren’t.