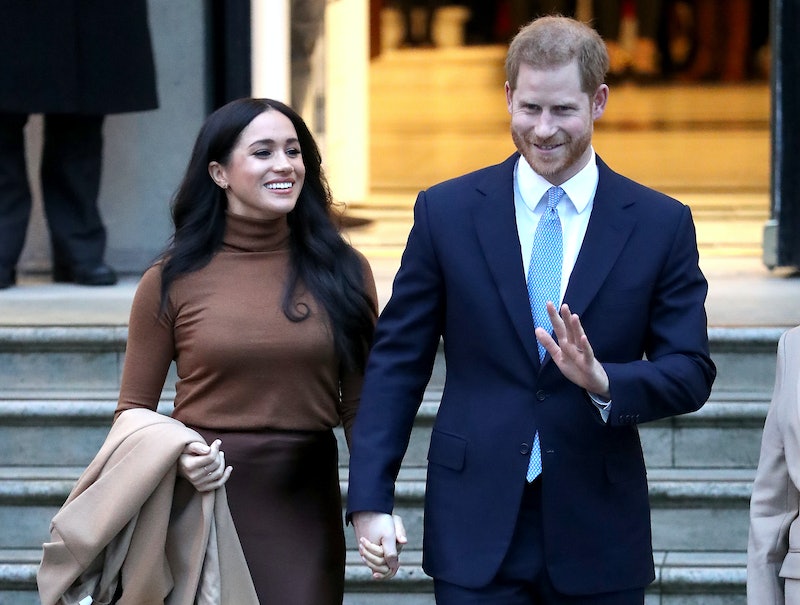 On Wednesday, an announcement from the Duke and Duchess of Sussex revealed that Harry and Meghan are basically leaving the royal family. The news comes less than three months after Meghan gave a tearful interview to ITV, telling reporter Tom Bradby, "Not many people have asked if I'm OK, but it's a very real thing to be going through behind the scenes," when asked how she was handling the royal spotlight, with constant scrutiny from press in both the UK and U.S.

This isn't the first time Harry and Meghan have set themselves apart from the British royal family. The Duke and Duchess of Sussex opted not to receive a courtesy title for their son, Archie Mountbatten-Windsor, when he was born in May 2019. Archie would still stand to inherit his father's title, becoming the Duke of Sussex, in the event of Prince Harry's death, provided that his great-grandmother, Queen Elizabeth II, did not rescind her grandson's title in the meantime. He could also become HRH Prince Archie, if Prince Charles took his mother's place on the throne.

There's no indication that Harry and Meghan intend to give up their royal titles, given that they signed their announcement as the Duke and Duchess of Sussex. Rather, the couple want to give up their duties as "official" royals, and to "balance [their] time between the United Kingdom and North America" while "becom[ing] financially independent" from Queen Elizabeth II.

Still confused? Don't worry. These six books will help you understand Harry and Meghan's royal retreat and what it means for the British monarchy:

Harry and Meghan: Life, Loss, and Love by Katie Nicholl

Written by Vanity Fair contributor Katie Nicholl, Harry and Meghan: Life, Loss, and Love examines former party-boy Prince Harry's unexpected turns as a military and family man, his marriage to Meghan Markle, and how their non-traditional marriage has shaken up the British royals.

Brit(ish): On Race, Identity, and Belonging by Afua Hirsch

You may have read Afua Hirsch's New York Times opinion piece, "Black Britons Know Why Meghan Markle Wants Out," but you should read her book as well. Brit(ish) explores and exposes racism in the UK — a country funded by foreign slavery and colonial expansion, which holds the ironic conceit of never having tolerated slavery on its own soil.

Diana: Her True Story — in Her Own Words by Andrew Morton

Many have observed that Harry's decision to raise his son as a relatively private citizen smacks of his late mother's own missions. In the 1980s and '90s, Princess Diana brought a much more human element to the stuffy British royal family, engaging in public displays of affection with both her family and the strangers she visited who were living with HIV/AIDS. Read about her extraordinary, and unfortunately short, life in Andrew Morton's biography.

Elizabeth the Queen: The Life of a Modern Monarch by Sally Bedell Smith

The Mountbattens: Their Lives and Loves by Andrew Lownie

An influential, but overlooked, element in the state of the modern-day British royal family, Dickie and Edwina Mountbatten helped to ensure, not only that his nephew, Philip, would marry the young Princess Elizabeth, but also that he would take his mother's name before doing so. There's a reason that Queen Elizabeth II's male descendants use "Mountbatten-Windsor" as their surname, and they have the Governor-General of India and his wife to thank for it.

It may not surprise you to learn that Queen Elizabeth II and Prince Philip were related by blood. Both are the great-great-grandchildren of Queen Victoria. By setting up advantageous marriages for her nine children, Victoria created family links throughout Europe's major royal houses. In addition to the UK royals, the current monarchs of Denmark, Norway, Spain, and Sweden are all descended from Queen Victoria. Read about her family's arranged marriages and the political problems they caused in Queen Victoria's Matchmaking.

More like this
Where Is John Leonard Now After Suing Pepsi For A Harrier Jet?
By Brad Witter
The Founder Of Chippendales Ordered Nick De Noia’s Murder
By Brad Witter
Chippendales Founder Steve Banerjee Died Hours Before His Murder Sentencing
By Brad Witter
'Black Bird' Subject James Keene’s Book Helped With His “Redemption”
By Brad Witter
Get Even More From Bustle — Sign Up For The Newsletter