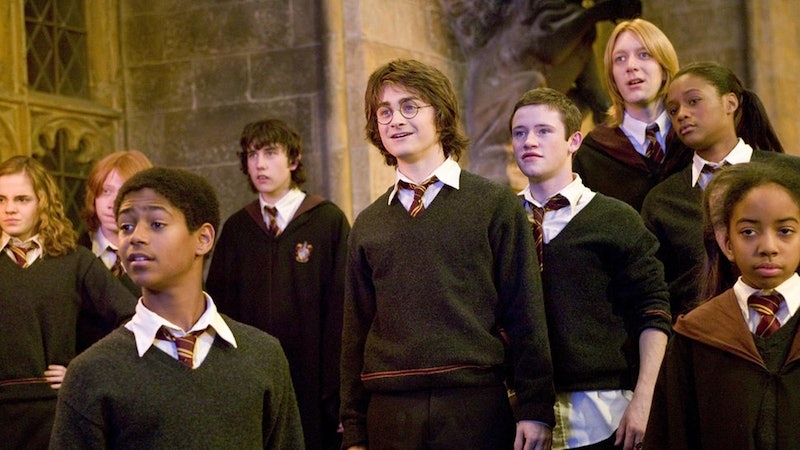 It's been more than twenty years since the publication of Harry Potter and the Sorcerer's Stone, and yet it seems like after all this time, new and exciting ways to experience J.K. Rowling's magical wizarding world are constantly being released. Case and point: Spanish-language versions of the Harry Potter books are now available for the first time ever in digital audio. Not only can an entirely new audience can experience the magic for the first time, but seasoned fans can experience it all over again, in a whole new way.

Harry Potter y La Piedra Filosofal, a production of Audible and Pottermore Publishing, will be available on Audible beginning on Feb. 21. It is performed by Puerto Rican actor, singer, composer, and television personality Carlos Ponce. This will mark the very first time a book from Rowling's wildly popular series will be available to the public in Spanish-language digital audio, but it certainly won't be the last. The subsequent six Spanish-language titles in the internationally bestselling series are being released later in 2019

The release of the first ever Spanish-Language Harry Potter digital audiobook doubles as a celebration for the launch of Audible Latino, “an integrated, multicultural destination for U.S. Hispanic customers to access a robust content catalog of Spanish-language and culturally relevant English-language spoken work content,” according to a press release about the project.

This new digital cultural hub plans to provide listeners with the largest selection of Spanish-language audiobooks in the United States, and it already has incredible performers signed on, including Armando Pérez (a.k.a: Mr. 305; a.k.a. Mr. Worldwide; a.k.a. Pitbull) perform From Negative to Positive, an Audible Original written by the rapper about the life lessons that have inspired his success.

Other offerings include Talking While Female and Other Dangerous Acts, a collection of original short stories from Latinas across the United States; El Principito, a Spanish translation of The Little Prince performed by famous booktuber Raiza Revelles; Desde México, Con Amor, a weekly humor show that looks at Mexican culture through an American lens; and The X-Files: Cold Cases, stories about the original characters from the hit franchise, available in Spanish for the first time.

You can purchase Harry Potter y la Piedra Filosofal now on Audible, where you can also pre-order Spanish-language versions of the series’ six other titles, due out later 201. While you’re there, don’t forget check out what the new Audible Latino has to offer.