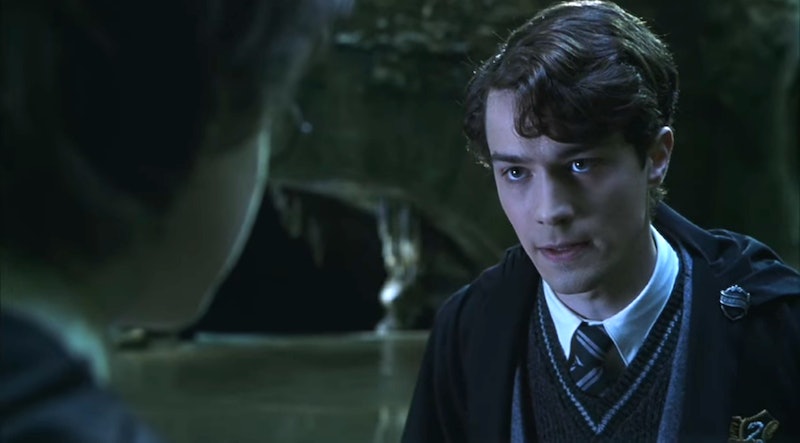 It might seem unfathomable, but there was once a time where you didn't know that Lord Voldemort was also Tom Riddle. Yet, it wasn't until the second Harry Potter book and movie that you discovered that Tom Riddle grew up to become Lord Voldemort. As the film Harry Potter And The Chamber Of Secrets turns 15 years old on Nov. 15, it's no wonder that Tom Riddle's identity is just common knowledge for all international fans by now. However, young Voldemort's reveal in the Chamber of Secrets at the end of the film was handled differently in other countries. That's because in English, J.K. Rowling came up with the conveniently amusing middle name of "Marvolo" (from Voldemort's magical grandfather's first name) to make Tom Riddle's name an anagram for "I am Lord Voldemort." That meant translators had to get real creative in order to make this big unveiling in Harry Potter And The Chamber Of Secrets work.

As Vox reported, translating the Harry Potter series was no easy task even without this anagram in the second book because of all of the made-up words and hefty word counts. Yet, BBC noted that Harry Potter has been translated into 80 languages since this magical and immensely popular series needed to be shared with the world. And while all of the books and films in Harry Potter had a twist, none was so dependent on language as The Chamber Of Secrets when the memory of Tom Riddle shows Harry that his name in the future is Lord Voldemort, thanks to a word puzzle in the air.

Not every language decided to switch up the names in order to make this anagram work, but plenty of them did, which leads to some pretty hilarious names. And while there is not a definitive list of all the translations of Tom Marvolo Riddle, by using The Chamber of Secrets film trivia from IMdB, a Quora thread on the topic, a RadioTimes article, an indy100 article, and the Harry Potter Wikia page, here are 13 of the best ones.

The name Voldemort is actually French and means "flight of death." (According to Metro, Rowling apologized to the French people for the evil wizard's name in 2009.) But the French translator still had to do some finessing when it came to Voldemort's given name. Along with sharing a middle name with The King, Elvis Presley, Voldemort's last name in French holds additional meaning, according to the Adventures on the Bookshelf blog from Oxford University. The blog noted that Jedusor is a play on the phrase "jeu du sort," which means "twist of fate" or "game of chance," and could also be a reference to the phrase "jeter un sort," which means "to cast a spell." The clever and snazzy name change leads to Riddle being able to write, "Je suis Voldemort" — "I am Voldemort."

Since "I am" in Spanish is "Soy," changing Voldemort's Muggle name was relatively simple to get the anagram to work. Beyond tinkering with "Marvolo," the translator simply spelled riddle with a "y" to end up with "Soy Lord Voldemort." According to Oxford Dictionaries, it appears that the English word "Lord" would still be understandable to Spanish readers and viewers.

In order to preserve the name Riddle in Italian, the Italian translation had to tweak the translation a bit. "I am" in Italian is "Sono," which has no "I." So the anagram became "Son io Lord Voldemort," which means, "It's me Lord Voldemort." That's a bit less intimidating when you think about Mario saying "It's a me, Mario!" from Mario Bros.

Another language that only had to change Tom's middle name is German. Marvolo became the equally-ridiculous Vorlost so the phrase, "Ist Lord Voldemort," could work.

In Iceland, Voldemort was born with the same name as Neville's toad — Trevor. No wonder he changed it to Voldemort to form the phrase "Ég er Voldemort."

In Brazilian Portuguese, just Tom's middle name got a reboot so the anagram is, "Eis Lord Voldemort." According to Quora user Camila Noronha, that translation is close to "Behold Lord Voldemort."

As users Jakob Turk and Andraž Ivančič noted on Quora, there is no Voldemort in Slovenia since the Dark Lord is known as the equally ominous sounding Mrlakenstein, which the average-sounding Mark Neelstin is an anagram for.

In Turkey, Voldemort's name is surprising similar with just a "d" added to Marvolo to make the anagram, "Adım Lord Voldemort."

Voldemort keeps his created name in Dutch, but his birth name becomes Marten Asmodom Vilijn for the anagram, "Mijn naam is Voldemort," which means, "My name is Voldemort."

In Denmark, Voldemort kind of sounds like a dreamboat since Tom Riddle became Romeo G. Detlev, Jr. for the phrase, "Jeg er Voldemort." Yet, you won't be asking, "Wherefore art thou?" about this Romeo.

Tom became Tom Gus in Sweden, but that was so "I am Lord Voldemort" could actually be translated into Latin to be, "Ego sum Lord Voldemort." This must have been easier than changing the name to fit "I am" in Swedish, which is "Jag är," according to WordHippo.

Modern Greek uses an entirely different alphabet than English, so even Harry Potter's name is changed to Χάρι Πότερ. That means there's no direct translation, but Indy100 wrote that Αντον Μόρβολ Χερτ in Greek is Anton Morvol Chert. That's an anagram for Άρχων Βόλντεμορτ, which means Archon Voldemort. According to Oxford Dictionaries, "archon" is another word for "ruler" in Greece.

If the last name "Cruplud" isn't absurd enough for you, then you'll be happy to hear that this is Tom's name in Romania to make the phrase, "Eu sunt Lordul Cap-de-Mort" work. Voldemort is called Cap-de-Mort in Romanian, which literally translates to "Cap of death," or as Reddit user pixielady explained, "Dead man's skull."

So while you may have always found the name Marvolo to be silly, now you know that Voldemort had even more of a reason to change his name in other languages.

More like this
Rupert Grint Just Shared A *Major* Update About Ron Weasley’s Future
By El Hunt
Anne Hathaway Shared A "Thrilling" 'Princess Diaries 3' Update
By Darshita Goyal
Reese Witherspoon Confirms This Fan Favorite Will Return For 'Legally Blonde 3'
By Jake Viswanath
Vanessa Hudgens Is Reportedly Engaged To Cole Tucker
By Jake Viswanath
Get Even More From Bustle — Sign Up For The Newsletter
From hair trends to relationship advice, our daily newsletter has everything you need to sound like a person who’s on TikTok, even if you aren’t.