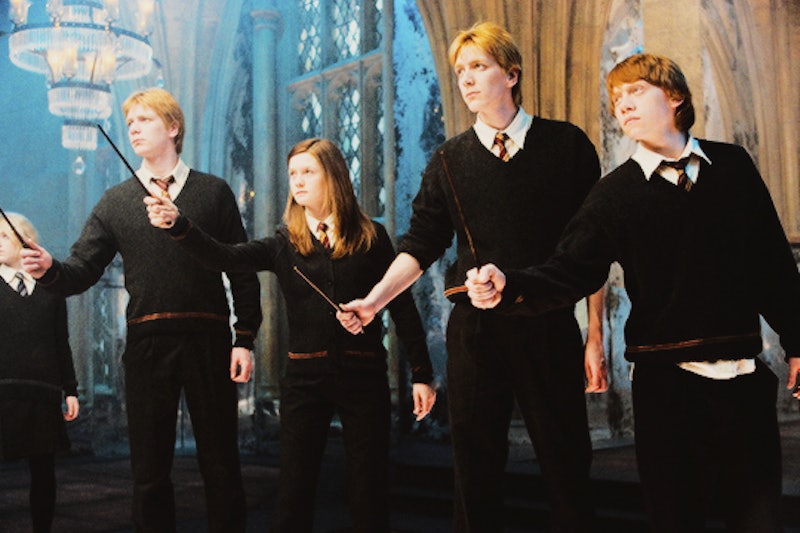 The Harry Potter film series came to an end nine years ago and since then the Wizarding World has grown, spawning a play, a prequel film series, and even a theme park. But that hasn't stopped fans wishing for just one more Harry Potter film with the original cast. While that sadly probably isn't on the cards, the next best thing happened this weekend — Evanna Lynch reunited with her Harry Potter co-stars.

Lynch, who played Luna Lovegood in the film series, shared a selfie of the reunion on Instagram. She was attending Rhode Island's Comic Con on Sunday, alongside Oliver and James Phelps who played Fred and George Weasley and Bonnie Wright who played Ginny Weasley. A reunion with half the Weasley family? What did we do to deserve this content? The friends looked super happy as they posed for the pic which Lynch captioned, "Thanks @ricomiccon for a lovely weekend and a chance to catch up with these jokers." She also posted a number of Instagram stories where she said that the Phelps twins were "making fun" of her selfie stick.

Oliver also joined in, sharing a photo of the four pulling funny faces with the caption "we take this stuff very seriously". Although it might've been almost a decade since filming on the final Harry Potter film finished, the gang barely look any different. They must have access to the Elixir of Life or something. The only thing that's changed is that neither Oliver nor James are the ginger Weasleys we once knew. As despite their red hair in the films, they're naturally brunettes. I don't know about you, but I feel cheated.

This isn't the first time members of the Harry Potter cast have gotten back together. Lynch and the Phelps brothers had an on-screen reunion when the three starred in Lenny Henry's Danny And The Human Zoo in 2015. Also back in June, Lynch and the Phelps, joined Tom Felton (Draco Malfoy) and Warwick Davis (Professor Flitwick/Griphook) at the opening of Hagrid's Magical Creatures Motorbike Adventure at The Wizarding World of Harry Potter at Universal Orlando Resort. Some of the stars rode the roller coaster before hosting a panel where they spoke about Harry Potter and the Wizarding World. Sounds amazing, now how can I make sure I'm at the next meet-up? Accio invite.

More like this
Rupert Grint Just Shared A *Major* Update About Ron Weasley’s Future
By El Hunt
Spencer Matthews’ Impressive Net Worth Expands Far Beyond Chelsea
By Sam Ramsden
Con O'Neill Was Connected With Sarah Lancashire Long Before 'Happy Valley'
By El Hunt
Twitter Can’t Get Over This One Part Of Lily Allen & David Harbour’s House
By El Hunt
Get The Very Best Of Bustle/UK
Sign up for Bustle UK's twice-weekly newsletter, featuring the latest must-watch TV, moving personal stories, and expert advice on the hottest viral buys.