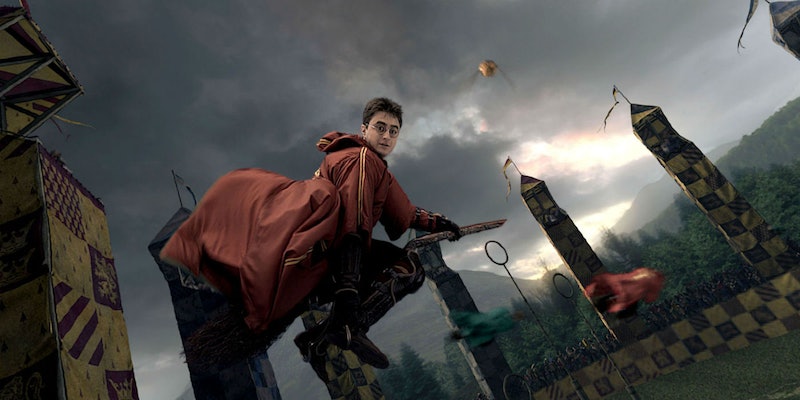 Harry Potter fans are no stranger to wild internet theories and speculation: were the Dursleys so terrible to Harry because he was a horcrux? Is Crookshanks *actually* Regulus Black? Is Ron Weasley just a time-traveling Dumbledore??? In the world of Harry Potter fan theories, the crazier, the better — so long as they line-up with canon, of course. Plenty of these theories have involved double-meanings associated with the clothing or accessory choices of our characters, but here's one that's more than just theory: Harry Potter's Quidditch uniform has a secret meaning. This one is fact — Bustle got the exclusive info from the films' costume designer Jany Temime.

In an interview arranged by Prismacolor, Temime, who created the costumes for Prisoner of Azkaban, Goblet of Fire, Order of the Phoenix, Half-Blood Prince, and both Deathly Hallows films, tells Bustle that she gave Harry Potter the #7 in Quidditch for a very special reason.

"I gave #7 to Harry Potter, because David Beckham had just won at the time," she says. "I thought every single kid in England would get it. Now, they don't know anymore. But at the time that it came out that Harry Potter was #7, it was a thing."

Beckham wore the infamous #7 jersey during his time playing for Manchester United, and in most of his appearances on England's National Team.

Though he later dropped the number when he transferred teams, the #7 has a special place in his heart — and in the hearts of his countrymen. In fact, the soccer legend launched a campaign called the 7: The David Beckham UNICEF Fund to help protect millions of children worldwide.