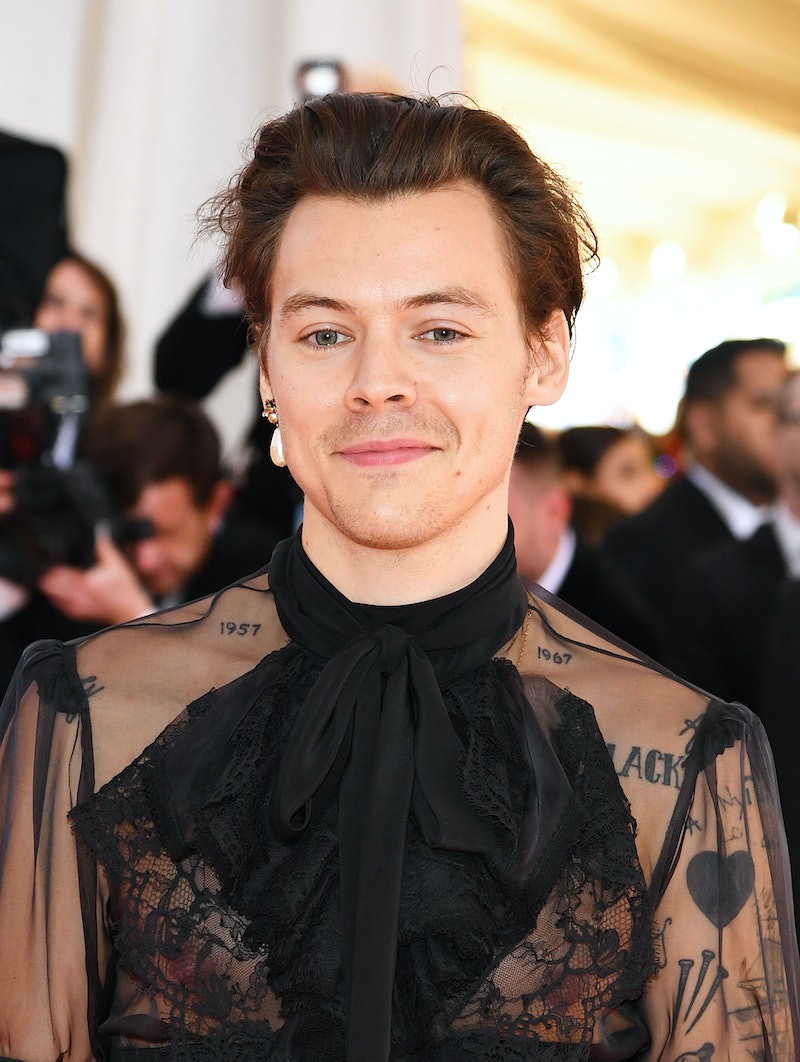 If you go to one of Harry Styles' concerts, you wouldn't just be in for a show filled with catchy pop songs and his undeniable charm. You'd also see the star supporting an array of important causes. In a new interview with Rolling Stone, Harry Styles opened up about supporting social issues with a very respectful explanation for why he spotlights topics, such as LGBTQ rights and Black Lives Matter, at his concerts.

During his interview with the publication, which was published on Aug. 26, Styles addressed the fact that he's taken time during his performances to wave a pride flag or fashion his guitar with stickers tied to the End Gun Violence and Black Lives Matter movements. It all comes down to acceptance and making clear no one's left out. "I want to make people feel comfortable being whatever they want to be,” he explained.

The former One Direction member went on to explain that he recognizes his privilege in being a white man and that, unlike those who these issues may directly affect, he can't quite come from a place of understanding. Instead, he stressed that he simply wants people to know that they are not alone and that he sees them:

“Maybe at a show you can have a moment of knowing that you’re not alone. I’m aware that as a white male, I don’t go through the same things as a lot of the people that come to the shows. I can’t claim that I know what it’s like, because I don’t. So I’m not trying to say, ‘I understand what it’s like.’ I’m just trying to make people feel included and seen.”

Elsewhere in the interview, Styles related that he does not wish to be seen as the hero of any of these causes simply because he's shining a light on them during his concerts. "It’s not about me trying to champion the cause, because I’m not the person to do that,” he said. “It’s just about not ignoring it, I guess."

While the singer is opening up about such an important topic, he did mention he was "nervous" to do so the first time because he didn't want anyone to feel as though he was co-opting any cause. He continued to tell Rolling Stone, "But then when I did it, I realized people got it. Everyone in that room is on the same page and everyone knows what I stand for. I’m not saying I understand how it feels. I’m just trying to say, ‘I see you.’"

This is far from the first time that the former boy bander has addressed such an important array of topics. On multiple occasions, Styles has opened up about issues relating to gay rights, and, of course, America's current political landscape. In an interview with The Independent in May 2017, published around the time that his debut solo album was released, he said there have been plenty of times throughout history that have "difficult times," but "we happen to be in a time where things happening around the world are absolutely impossible to ignore. I think it would’ve been strange to not acknowledge what was going on at all."

Based on the singer's various talking points, don't expect Styles to ignore any of the very important social issues of today. Instead, fans can count on him to be an ally by bringing these topics center stage.

More like this
Harry Styles Sent Lizzo Flowers For A *Special* Reason
By Grace Wehniainen
Harry Styles' 'X Factor' Audition Didn’t Start Off As Well As You Thought
By Jake Viswanath
Lil Nas X, Jack Harlow, & Harry Styles Lead The 2022 MTV VMAs Nominations
By Jake Viswanath
Christina Aguilera Took A Powerful Stand At Brighton Pride
By Sam Ramsden
Get Even More From Bustle — Sign Up For The Newsletter