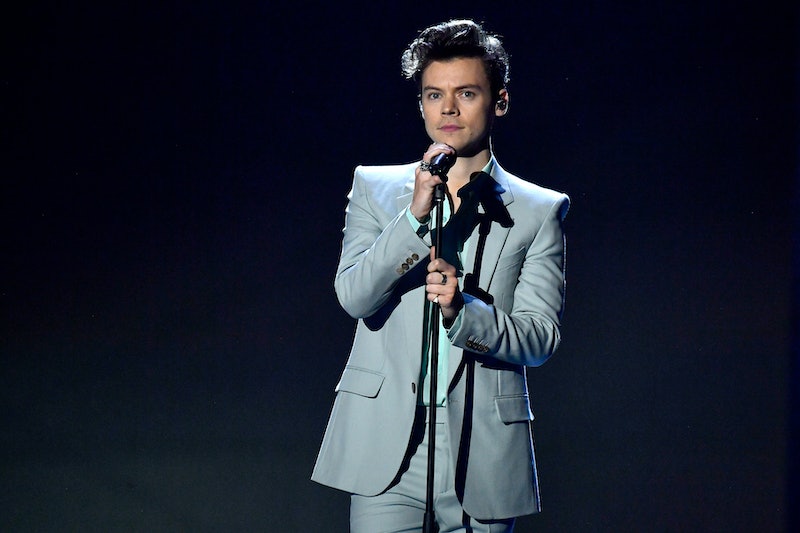 On the first stateside stop of his world tour, Harry Styles made a powerful and timely statement. The singer decorated his guitar with stickers that read "END GUN VIOLENCE" at his show in Dallas on June 5, and Styles showcased the anti-gun violence message online afterward, posting a close-up photo of his guitar and the stickers via Instagram and Twitter on Wednesday.

Styles didn't add any additional commentary to the statement, simply captioning the photo, "Dallas, Live On Tour," in the style of most other recent photos he's posted since he's been on the road. But the sticker on his instrument spoke for itself.

In the wake of recent shootings all over the country — from Sante Fe, Texas (the same state where Styles was performing) to Noblesville, Indiana — the musician's statement is unfortunately topical, and it's not the first time Styles has voiced his support for the movement to end gun violence. In March, he tweeted that he signed the March For Our Lives petition, which called on lawmakers to pass stricter gun regulations, and urged his followers to do the same.

On the day of the march, which took place in the U.S. on March 24, Styles also posted a photo with other members of his tour wearing March For Our Lives T-shirts on Twitter, writing, "Sending love to you from Oberhausen."

After Styles, who is also a fervent supporter of the LGBTQ community, posted the photo, many fans commended him on his statement. @w0manlalala shared the singer's tweet and wrote, "On his first concert in the United States, he decided to highlight the 'end gun violence' sticker on purpose. I stan the RIGHT MAN." Another fan tweeted,

"The message you want to spend around is so beautiful I lost a loved one under the effects of a bullet in Paris. This violence must stop cause more and more people are suffering the consequences as victims, family or friends #EndGunViolence #MarchForOurLives Thanks for this Harry".

Meanwhile, @stylesscrabble commended Styles on the way he uses his voice, tweeting,

"get yourself an idol who waves rainbow flags on stage, makes pride merch, has ‘end gun violence’ stickers on his guitars, donates ticket sales to charity, gives beautiful speeches about love and acceptance and who encourages everyone to be whoever they want to be... bc i did [smiling emoji]"

@StatsBritain also shared a similar sentiment and wrote, "Every Harry Styles concert is like a mini pride and now he's promoting gun control, he’s using his platform to its full potential and that's 100% awesome and hopefully inspiring to other celebrities with similar platforms, there’s always more you can do. Be More Harry."

The musician's show in Dallas took place just hours after Education Secretary Betsy DeVos said on Tuesday that a school safety commission — created directly after the tragic shooting at Marjory Stoneman Douglas High School in Parkland, Florida — would not focus on the role of guns, according to ABC News.

"That is not part of the commission's charge per se," DeVos reportedly said during a hearing on education funding. When Democratic Sen. Patrick Leahy replied, "So you're studying gun violence, but not considering the roles of guns," DeVos said, "We're actually studying school safety and we can ensure our students are safe at school."

CNN also published a tally of all the school shootings that have taken place thus far in 2018, and noting that there have been 23 shootings, averaging out to one shooting per week.

Given those horrifying statistics, Styles' message is especially powerful, and if his past statements are any indication, he'll surely continue to use to his voice to speak out on social issues as he makes his way across the U.S. on tour this summer.

More like this
Harry Styles Helped A Fan Come Out As Gay In Dramatic Fashion At His London Show
By Jake Viswanath
Here’s How Lizzo Is Supporting Abortion Rights After The Roe v. Wade Reversal
By Brad Witter
Cardi B’s New Single “Hot Shit” Features Kanye
By Alyssa Lapid
You Might Want To Rewatch 'Elvis' For This Britney Spears Easter Egg
By Grace Wehniainen
Get Even More From Bustle — Sign Up For The Newsletter