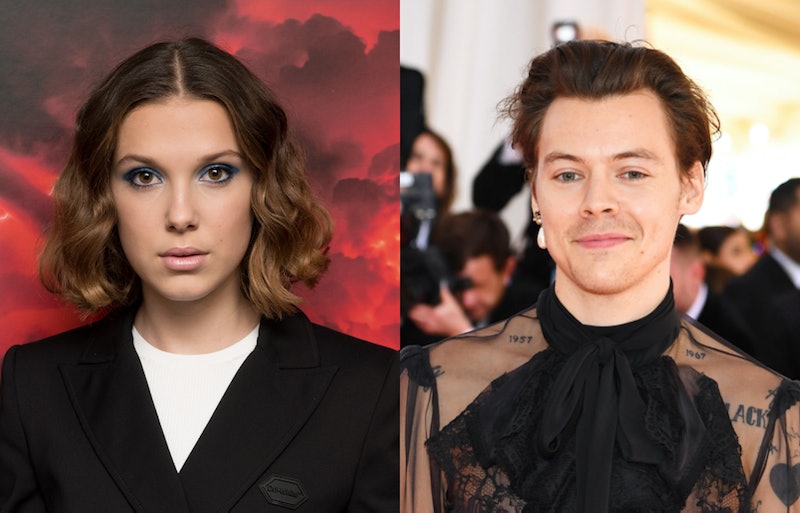 Music has the power to bring people together, no doubt about that. Recently, though, a show across the pond brought two incredibly *famous* people together, and fans have pretty much been losing their minds over it ever since. On Saturday, Aug. 17, Harry Styles and Millie Bobby Brown danced at Ariana Grande's concert in London, as Us Weekly reported. The colliding of the two stars caused quite a ruckus on Twitter, and it's easy to understand why — it was an adorable interaction of epic proportions.

According to several videos from fans (as collected by Us), both Styles and Brown boogied down with friends while at Grande's recent concert at the O2 Arena over the weekend. Now, it doesn't appear as if they came together — based on the clips, it seems like they just happened to cross paths in the VIP section. They're both from the UK originally, though, so who knows? Maybe they're actually old pals.

Twitter was thrilled about seeing the pair in the same place at the same time, and several fans recorded clips of the two enjoying themselves at the show. In one of the clips, @rosiexwh captured them both busting moves within super close proximity of one another. "Enjoy this video of Harry Styles and Millie Bobby Brown dancing," she wrote.

In @KissyOopsy's video, Styles and Brown were actually seen chatting, and it looked like they were having a great conversation. "Harry? with Millie Bobby Brown? at Ariana Grande's concert? This just added 10 years to my life," he captioned the clip.

What were they talking about, though, you wonder? Who knows. Maybe they were sharing their favorite Grande songs. Maybe Styles was giving Brown his personal notes and theories on the third season of Stranger Things. Maybe they were just talking nonsense and cracking jokes. Oh, to be a fly on the wall.

"SO HARRY STYLES AND MILLIE BOBBY BROWN ARE INTERACTING AT ARIANA GRANDE'S CONCERT THIS IS THE BEST THING TO EVER HAPPEN," @icaruslarents commented about a similar clip. Another fan, @lostmykiwi wrote, "Imagine being in one of Netflix’ best show and going to see Ariana who is one of the greatest singers of our time only to be told jokes by THE Harry styles. Millie is winning." Truth.

A third fan, @harryftkissy, confessed, "harry with millie brown at ariana's concert?? this is the ONLY thing i'm gonna talk about the next week." Yet another person, @remileven, shared, "millie bobby brown and harry styles talking at ariana grandes concert. can you say legendaric." Legendaric. Definitely not a word, but the sentiment is for sure understood.

So, yeah. Brown and Styles hanging out was a big deal. Will we see more of this epic friendship in the future? Only time will tell. Fingers-crossed that Styles nabs a cameo in the next season of Stranger Things, though.