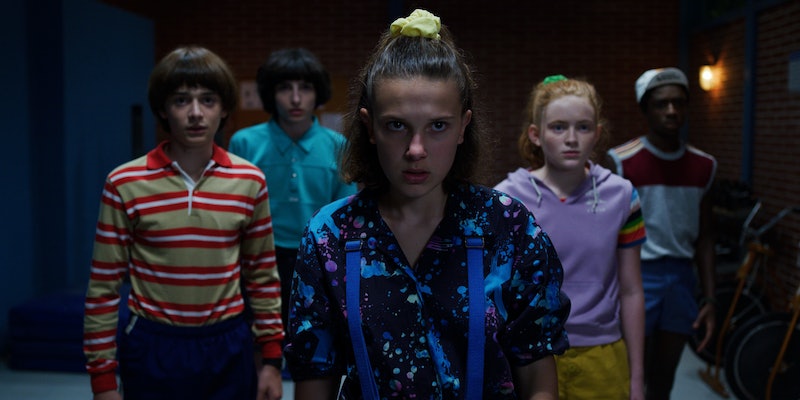 Still having nightmares about the Mind Flayer's monster? Netflix is here to assure you that the Stranger Things Season 3 monster isn't so scary in real life. It turns out the actors weren't facing anything that even remotely resembled the gooey, massive bad guy that was assembled out of the Flayed residents of Hawkins. Instead, they were acting opposite a man wearing a tight red spandex suit and a silver helmet.

The man who played the monster on set was assistant stunt coordinator Ken Barefield, and on Thursday, Netflix introduced him to the world via the streamer's official Instagram page. The post includes a side-by-side photo of Barefield and the monster alongside a caption that reads, "more proof the Stranger Things cast is incredible: *THIS* is what they really saw when battling the mind flayer. the Stranger Things Behind the Scenes podcast has interviews with the cast on working with this season's 'monster.'"

The 30 minute episode of the podcast not only includes anecdotes from the cast, it also lets the "monster" speak for himself about what it was like to bring the Mind Flayer's creation to life. "Not a lot of people knew my name, but they knew me as bobblehead or red monster man," Barefield shared in the podcast.

Barefield wasn't simply asked to stand in for the monster so the camera would have a point of reference in the scenes — he was told to act like the monster for the actors. In the podcast, Natalia Dyer describer how Barefield surprised her and Charlie Heaton during the filming of the spooky hospital hallway scene that found Nancy and Jonathan facing off against the Flayed monster. "And he just looks up and like screams, and it's right in the camera and it's so... it's one of those moments where you're just like, this is insane," Dyer said.

While everyone appreciated Barefield's commitment to bringing the monster to life, he wasn't nearly as terrifying as the finished product. In fact, he revealed in the podcast that there was a brief moment of silence when the camera stopped rolling on the hospital scene before everyone started laughing and cheering for the assistant stunt coordinator. It seems unlikely that anyone would laugh at the giant, creepy monster that terrorized Nancy, Jonathan, and the rest of the gang in Season 3 if they encountered it in a dark hospital corridor.

Still, the fact that Barefield stood in as the monster when the cameras were rolling is only the second weirdest revelation about the monster that the podcast served up. The first is that the inspiration for the Flayed creature was puberty. Yes, puberty.

Writer Kate Trefry explained, "Puberty is disgusting and it's awful." That's how the pivotal coming of age experience served as the inspiration for a monster that's made out of body parts that are completely out of control. She continued,

"When a caterpillar builds its chrysalis, its whole body dissolves into goo and then the DNA gets rearranged into a completely different animal and that animal is what gets reborn. Season 3 is this sticky, gross, toothy weird monster because it is that — it's that moment of everybody is turned to jelly and we’re waiting on the edge of our seats to see what they become."

From "red monster man" to the perils of puberty, it's clear that there was way more to the Stranger Things Season 3 monster than what viewers saw onscreen.