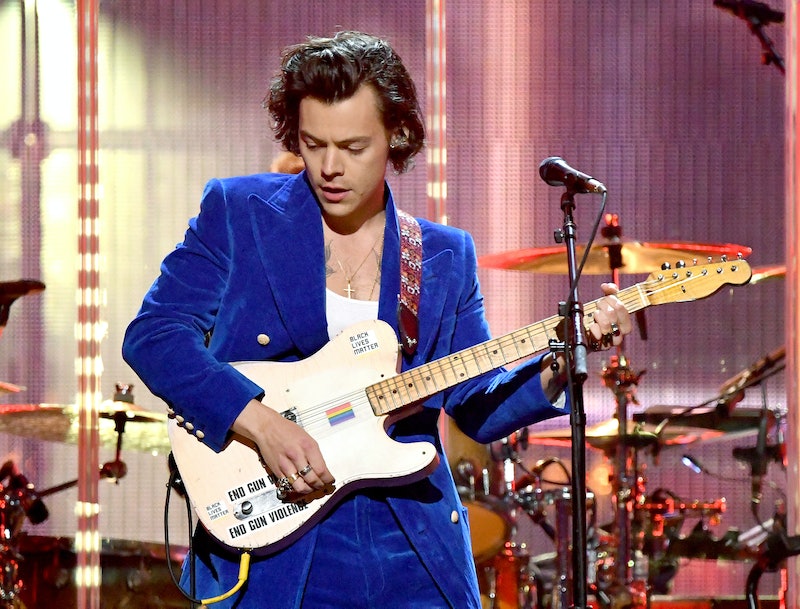 A good musician knows how to give the people what they want — and how to tease what's coming. The internet is ablaze now that Harry Styles has officially announced his new album, Fine Line, which will arrive just in time to be the perfect holiday stocking stuffer. Not only did the artist confirm the title of his second solo album, he also announced the release date — Dec. 13 — in a tweet on Monday, Nov. 4, accompanied by an image that appears to be the album cover.

On the Fine Line album cover, Styles is shown rocking a pair of white pants and a hot pink blouse — unbuttoned midway, of course. But he's not alone in the photo. A mystery hand covered in a black glove is shown reaching out to him from behind the fishbowl camera lens. What does it all mean and how will all of this factor into his new list of songs? Those are questions that, unfortunately, have to go unanswered for the time being. However, just knowing that a new Styles album is on the horizon should be enough to kick your holiday spirit into overdrive and leave you wishing it was December already.

This news comes just one day after Styles had tweeted out a link to a website titled Doyouknowwhoyouare.com. Previously, the site was used as a compliment generator, but when you visit it now, it gives fans a cryptic message from the former One Direction singer that reads, "YOU ARE PATIENTLY WAITING FOR SOMETHING TO HAPPEN. TPWK. LOVE, H."

Many fans may have suspected that this was Styles' way of teasing the release of a new album, though the message could've also just as easily been hinting at a new song or 2020 tour. But even now that the mystery has been solved a whole new set of questions and theories have popped up in its wake, particularly when it comes to the release date for the album, which just so happens to fall on Taylor Swift's 30th birthday.

Styles and Swift had a very brief romance several years ago. They reportedly began dating in November 2012 before calling it quits in January 2013. But as short-lived as the relationship was, it's caused them to be forever linked in the eyes of the public. When either of them come out with a new song, fans wonder if it was written with each other in mind. And the fact that Styles' new album is coming out on Swift's birthday are sure to send suspicions into overdrive regarding the implications of this decision. Is it merely just a coincidence or is there an underlying meaning to it all? Fans certainly seem to think so...

Some think it could be hinting at a potential collaboration between the two of them, while others predict that it indicates one or more of his songs will be about Swift in some way.

Granted, none of this has been confirmed by either Styles or Swift, so the date in question could simply be purely accidental — Dec. 13 does fall on a Friday this year, after all. Either way, it's sure to give fans something to think about long into the holiday season.