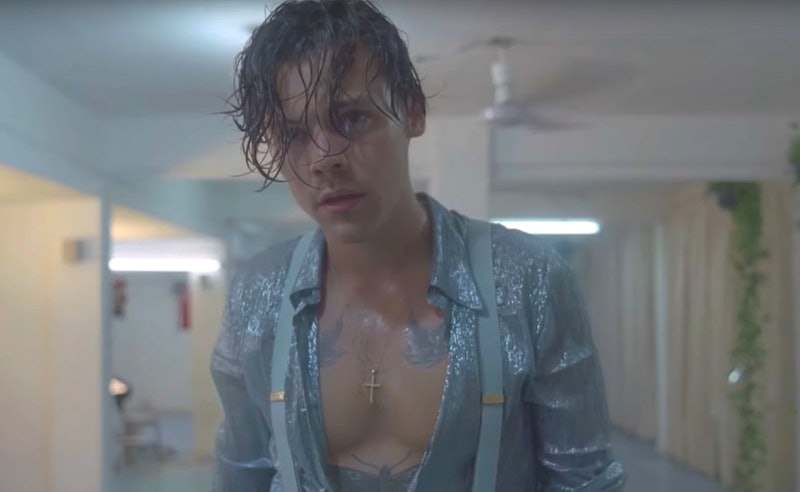 There's a lot of power in the name Harry. Mr Potter, an actual prince, and of course the one and only Harry Styles. The artist has moved from international superstar band member to renowned solo artist and made it look easy as pie. Dare I say Beatlemania? Yeah, I said it and Harry Styles' new single is about to kick that mania into high gear.

His latest release, "Lights Up," is the first single off his hotly anticipated second album. So how what's the verdict with this new piece of music? Well you guys, he's flipping smashed it hasn't he.

According to the Independent, the single was recorded at Shangri-La in Malibu, a studio belonging to Rick Rubin. Wow, that's sounds like a nicer location for recording an album than your average stuffy old studio. Rubin is a world famous producer, founding member of Def Jam, and NME reports that he is credited with giving Johnny Cash's music career a Lazarus-esque return to greatness.

The song itself is produced by Tyler Johnson and Kid Harpoon, according to Pitchfork, who always helped Styles to write the song itself.

We've also been treated to a brand new music video for "Lights Up," and if you love very good looking people dancing together in a sweaty topless mass along with Styles all dressed up in stunning sequin numbers, you should give it a look over ASAP. Watch out for the cute little tongue poke from our boy, which totally steals the show.

The whole process of getting an album takes a little time and boy oh boy have fans been waiting with bated breath since his first album back in 2017. Styles spoke to Rolling Stone about the new album saying simply, "It's all about having sex and feeling sad." Wow, so basically everyone's experience of their twenties, am I right?

Styles opened up to Rolling Stone about how using psychadelics ended up being a part of his creative process on this album. Alongside listening to another artist whose meteoric rise is not dissimilar to his own. The singer said:

"We'd do mushrooms, lie down on the grass, and listen to Paul McCartney’s Ram in the sunshine. We'd just turn the speakers into the yard."

The new album is the second dalliance into solo work from Styles, who shot to international fame as a member of the one and only One Direction. The band, which began with a bunch of lads auditioning separately for The X Factor, became one of the biggest boybands of all time, propelling them all to international fame, success, and touring all over the planet.

The band decided to call it quits back in 2015. Styles spoke to Rolling Stone about any potential reunion saying that y'all, never say never. He said:

OMG imagine. Maybe dreams will come true for hard out One Direction fans. Until then, "Lights Up" is the first of many bangers sure to come out of Styles' new album.