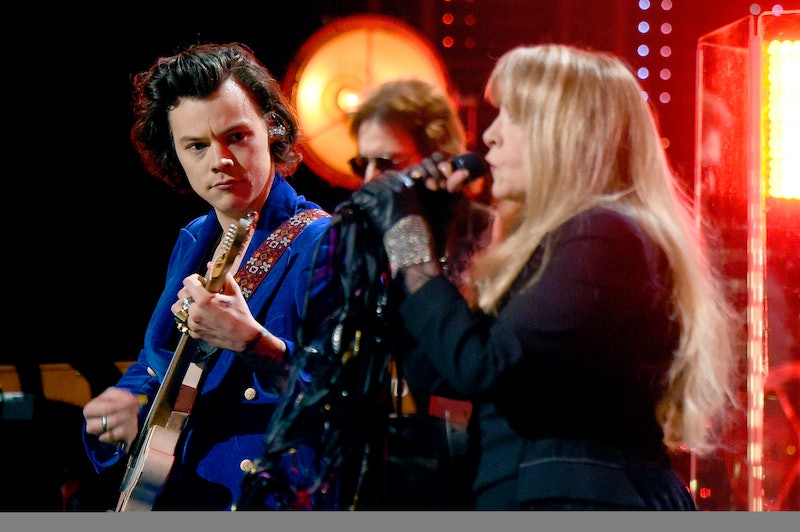 Even legendary rock stars aren't immune to the charms of handsome boy band members — even if they can't always keep them straight. Harry Styles and Stevie Nicks' Rock & Roll Hall of Fame performance showcased the pair's adorable friendship, although the former Fleetwood Mac singer confused One Direction for another iconic boy band while gushing about styles.

Nicks — whose solo career was honored at the Hall of Fame induction ceremony on Friday, March 29 — was celebrated by her close friend, Styles, who told the audience that Nicks was "everything you have ever wanted in a lady, in a lover and in a friend," according to E! News. "Stephanie Nicks, I love you, we all do, and that is true, Stevie." In addition to describing Nicks as his "idol," Styles also opened up a bit about their friendship, explaining that the rock star is always there for her friends, no matter what. "If you’re lucky enough to know her, she’s always there for you," Styles gushed during his induction speech. "She knows what you need, advice, a little wisdom, a blouse, a shawl. She’s got you covered."

The feeling of love was clearly mutual, as Nicks also made sure to effusively thank Styles for his kind words and friendship after the ceremony. "He fits in with all of us," Nicks told reporters backstage, according to Variety. "He toured that record into the ground, which is what you are supposed to do. He will still be around in thirty or forty years, just as I have continued to do." However, while gushing about Styles' decision to take a risk with his first solo album, Nicks mixed up the boy band that helped make her good friend famous: "When he decided to make a solo record from *NSYNC — sorry, not *NSYNC," she said, before joking, "I'm never going to live that one down, I know."

In addition to charming the audience with their adorable display of friendship, Styles also joined Nicks onstage for a performance of "Stop Dragging My Heart Around," stepping in for the late Tom Petty on the duet. At one point, Styles even got down on his knees to bow down to Nicks, who he even described as a "God" in the music industry, as reported by Vulture.

Styles isn't wrong — in fact, Nicks' induction as a solo artist officially makes her the first woman to ever be inducted into the Rock & Roll Hall of Fame twice. (She was inducted into the Hall of Fame in 1998 as a member of Fleetwood Mac.) Nicks briefly mentioned her historical achievement during her speech, saying that though, "It’s not hard for me to go and play for you, but it’s very hard for me to try to tell you — thank you for for this, for being the first girl in the Rock and Roll Hall of Fame — twice!"

Later in her speech, Nicks revealed that she encouraged all bands to pursue solo projects, as both a creative outlet and a way to improve their career longevity. "Now I’m telling all my friends. The girls in Haim? I’m like, 'Okay you guys, you gotta really get it together now. One of you needs to step away. And don’t break up your band, just do an album so you have it. Because it’s gonna take 20 years before you get recognized, again! So you’ll already be like, 60,'" Nicks said.

The trick, she revealed, is making sure to remain open with everyone involved, and to give both projects the same level of priority. "I think if you’re kind and loving, and you tell them that you will always put them first, and they will always be at the top of your priority list, they will understand and they will stay. Go do what you want to do and have fun," she said.

It's clear from her speech and her social media presence in the days leading up to the event that it means a lot for Nicks to be honored for her solo work, as a pioneering woman in rock and roll, and not just as a member of Fleetwood Mac. "I have a lot to say about this — but I will save those words for later," Nicks wrote on Twitter back in December, after she was announced as a 2019 inductee. "For now I will just say, I have been in a band since 1968. To be recognized for my solo work makes me take a deep breath and smile. It's a glorious feeling."

And since she doesn't seem to be in the mood to slow down any time soon, here's hoping that she and Styles will team up on a new project sometime soon. After all, they've already proved that they make beautiful music together.