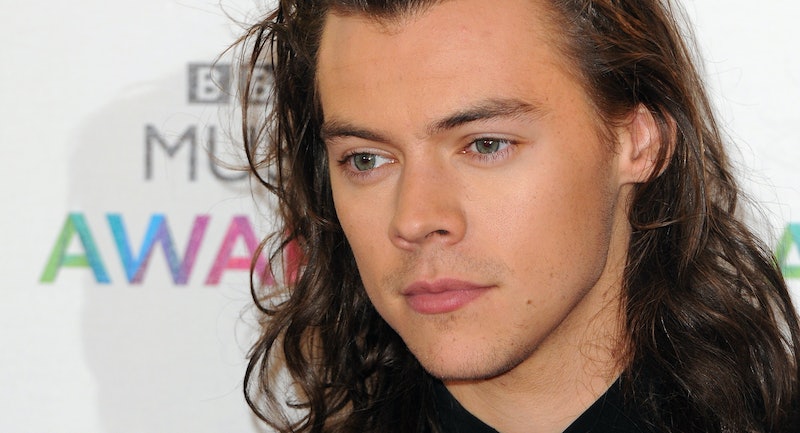 Harry Styles stepped back from his music career following One Direction's hiatus, but after returning to the spotlight last month with a mysterious April 7 announcement, he's been charging full steam ahead. He unveiled his debut solo single, "Sign of the Times," on the previously teased date, and then revealed on Thursday that his new self-titled album will be out May 12. Now, ahead of his Saturday Night Live performance on April 15, Styles surprised fans waiting at SNL with kiwi, and it's a pretty major clue that he'll be performing, well, "Kiwi."

Of course, nothing has been confirmed, but serving the same fruit featured in one of the song titles from Styles' album tracklist seems more than coincidental. If true, it will mark the second song to come from his upcoming record.

Billboard reported that Styles' SNL set will include renditions of "Sign of the Times" and another undisclosed tune, so maybe this is the singer's way of filling in the blanks. I mean, why else would you bring kiwi to SNL? It's a fine enough food, but it's not really a common snack. Besides, while fans would probably be happy for any new music, they already seem pretty amped for "Kiwi."

This Fan May Be Onto Something

Not only that, but the fan (understandably) has no chill. All caps means, "I will not calm down for anyone."

While Another Was Skeptical

Harry is a noted prankster.

Some People Are Already Prepared

I think that's as close as you can get to the live experience without actually, ya know, being there.

And Others Are Revamping Their Wardrobes

Whatever song it is, listeners won't have to wait long to hear Styles' album in full. Keep crossing the days off your calendars, folks. May 12 will be here sooner than you think.

More like this
Olivia Wilde & Harry Styles' Relationship Timeline Started With 'Don’t Worry Darling'
By Jake Viswanath
Why Harry Styles & Olivia Wilde Make A Great Couple, According To Astrology
By Nina Kahn
Looks Like She Made It
By Lindsay Zoladz, Beau Grealy and Tiffany Reid
Everything To Know About Taylor Swift’s 10th Studio Album, 'Midnights'
By Grace Wehniainen and Jake Viswanath
Get Even More From Bustle — Sign Up For The Newsletter