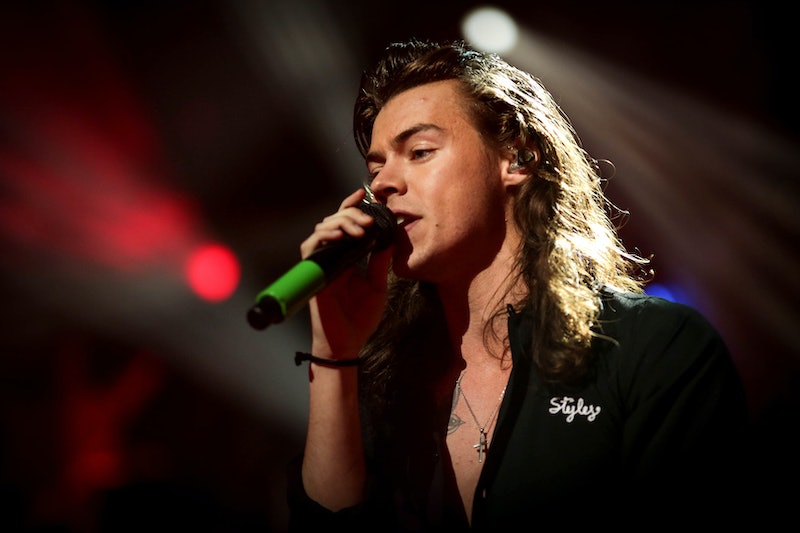 One Direction may be on hiatus, but Harry Styles hasn't taken a break from his fans. In his first Rolling Stone cover story as a solo artist, Styles addresses misconceptions about his young female fans, most of whom have been with him since they were teenagers finding confidence through 1D's first single, 2011's "What Makes You Beautiful," and rarely get the respect they deserve. When Styles was asked if he's losing sleep at night, worrying that he won't have a more mature, sophisticated fanbase with upcoming self-titled debut, out May 12, he was quick to refute the notion that his diehard fans don't know what's up. The young women who can't get enough of Styles actually set the trends.

"Who's to say that young girls who like pop music — short for popular, right? — have worse musical taste than a 30-year-old hipster guy?" Styles said to Rolling Stone, coincidentally seeming to agree with his ex Taylor Swift, who on "We Are Never Ever Getting Back Together" chides an ex who was too cool for her record collection. "That's not up to you to say. Music is something that's always changing. There's no goal posts."

For Styles, the idea that young women don't have their fingers on the pulse seems silly. "Young girls like the Beatles," he said. "You gonna tell me they're not serious? How can you say young girls don't get it?" Being that the hype surrounding Styles' former boy band was the modern version of Beatlemania, he knows what he's talking about. Hello, according to Billboard, One Direction sold 7.6 million total albums in the U.S. by 2016.

But, what Styles is really saying here is that before The Beatles were getting all experimental with Sgt. Pepper's Lonely Hearts Club Band, they were making girls cry with songs about hand-holding and all-encompassing long distance love. The reason The Beatles broke records with their Ed Sullivan performance or sold out Shea Stadium was because of those screaming girls, who can't be ignored. The passion these young women showed for the mop-topped Brits wasn't silly, but totally sincere. That's something Styles appears to understand wholeheartedly. He explained,

"They're our future. Our future doctors, lawyers, mothers, presidents, they kind of keep the world going. Teenage-girl fans — they don't lie. If they like you, they're there. They don't act 'too cool.' They like you, and they tell you. Which is sick."

Why yes, Harry, it is pretty sick how teenage girls go to the mat for the things they love. There's no such thing as guilty pleasures — teenagers like what they like and don't feel shame for that. This unadulterated passion, this love in its purest form, is something that seems to fade with age. People become jaded or concerned that liking something will bring them down in someone else's estimation — especially in terms of pop culture. The fact that young fans seem able to ignore the noise and just decide for themselves makes them an anomaly. But, it also makes them worth paying attention to.

Styles' "girls are the future" speech rails against the idea that young women can't be complex individuals. It refutes those who mistakenly think women can't be both well-versed in politics and fashion. That they can't fill their playlists with Styles and The Beatles, while flipping through issues of Teen Vogue and The New Yorker. Styles' comment shows respect for the young women who made Styles and so many other pop stars' careers.

It can't be denied, though, that Styles' line of thinking says something about how he would like the world at large to see his own career. That like these teenage girls, he'd like a little respect for what he's been doing and for what he's achieved thus far. Going solo doesn't mean that Styles is trying to get "serious" or leave his old career and fans behind, but he doesn't want to be pigeonholed as an ex-boy bander. He wants to be seen as an artist who can still appeal to those teen girls and be a genuine pop star who's looking to expand his sound.

Styles can have his own Beatles moment, complete with all those screaming girls still by his side. Styles doesn't have to choose either/or — he can have it all, just like all those future doctors, lawyers, mothers, presidents, who will keep buying his albums.