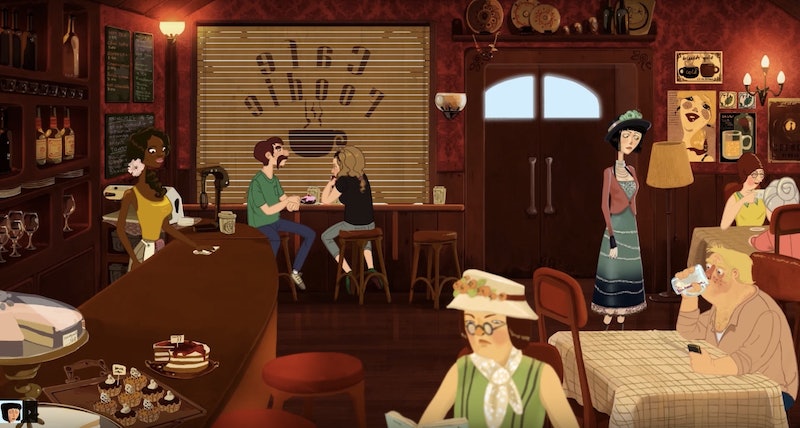 Video game Memoranda, described as a game about "forgetting and being forgotten," is a surreal, point-and-click adventure that was reportedly largely influenced by the stories of Japanese author Haruki Murakami. The lead developer of the game, Sahand Saedi, says he kept a stack of Murakami books next to his bed, and whenever he felt stuck while designing the game he would look for inspiration by opening one of the books to a random page. “I was usually lucky and was able to connect things together with one line of dialog or a small puzzle,” he says.

The game — which launched in late January on the Steam Store — embodies Murakami's style through its tragic, unfortunate characters stuck in extraordinarily "normal" situations, and through superhuman, mystical elements sprinkled ever so subtly, and nonchalantly on the game's world. Memoranda centers on a young woman who has lost her memories, in a European-looking town filled with colorful characters, many of whom live the definition of pain. Think a runner who can't run anymore, a soldier who loses his mind after a bloody war, and a bird that's lost its instincts.

While the game was inspired by Murakami, it does not mimic him. Many elements of the game will feel new to players, but what will likely feel familiar to players and fans of Murakami are the feelings the game attempts to evoke.

“Most of the short stories by Murakami happen in a very calm and realistic setting and the introduction of a strange and unexpected character or a small event will break the atmosphere and change everything. Suspense and fright are very clear elements that have been ingrained in my mind while reading Murakami’s stories,” Saedi explains. “These feelings, and also Murakami’s knowledge about music and many aspects of technology, made me think that a video game can be made by combining them.”

In the game, players will progress by exploring the world and interacting with the many characters, as well as solving puzzles and collecting items. It's the perfect kind of game for book-lovers who may not be into video games, per se. Because really, how could you not be interested in something that was inspired by Murakami? His influence is pretty much a safe bet that whatever media you're about to consume is going to be great.

This game is a game of feelings. It's a game that's going to make you think and keep you on your toes. Everything will feel normal and real, until you stumble onto the magic strangeness that can only be described as Murakami-esque.

To buy Memoranda for Mac or PC, visit the Steam Store. Happy gaming!