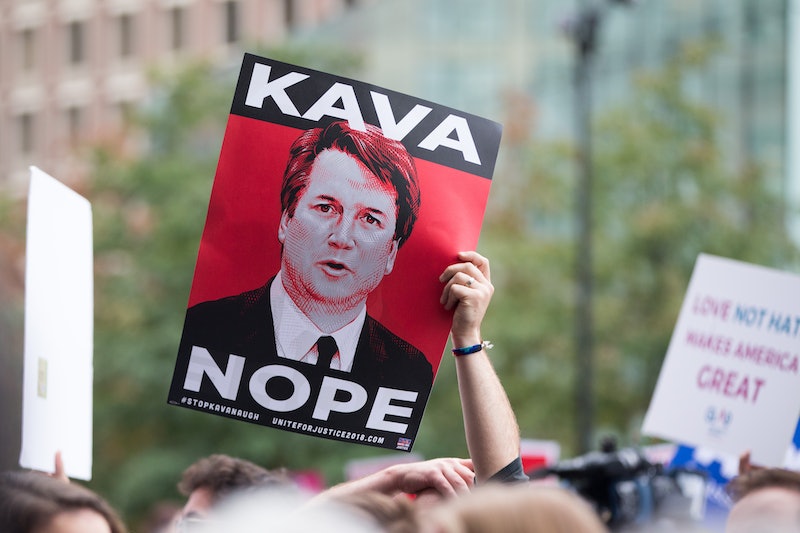 Regardless of whether he ends up on the Supreme Court, Brett Kavanaugh may soon find himself persona non grata at Harvard University. According to the Harvard Crimson, Harvard students are filing sexual harassment complaints against Kavanaugh, who used to teach at the university, in an attempt to ban him from the school's campus.

Last week, several Harvard students reportedly filed Title IX complaints against Kavanaugh, who until recently was set to teach a course at the University's law school in the January 2019 semester. (On Monday, the university announced Kavanaugh's 2019 course at Harvard was canceled.)

Citing the multiple sexual misconduct allegations that have been made against the Supreme Court nominee, they argued that his presence on the school's campus would violate Harvard's policies against sexual and gender-based harassment, according to the Crimson, and create a hostile environment for Harvard students. Kavanaugh denies having sexually assaulted anybody, and the allegations against him have nothing to do with his time teaching at Harvard. Bustle has reached out to Harvard for comment on the student-led campaign to ban him from campus.

The effort at is being led by student Jacqueline L. Kellogg, who told the Crimson that she's filed a Title IX complaint against Kavanaugh with the University’s Office for Dispute Resolution. She's encouraged her like-minded peers to do the same, and by Monday, 48 students signed a petition saying that they'd filed complaints against Kavanaugh. However, one of the signatories told the Crimson that not everyone who signed the petition had actually filed a complaint yet.

Title IX is the federal law that bans gender-based discrimination at public schools. Kellog told Politico that her campaign is "simply an action of students utilizing their right to raise concerns about who is invited to be/teach on our campus."

"The Title IX process is open to all students and exists to ensure that students have a channel in which to make their voices heard when they are saying that they feel less safe and less able to access educational resources on campus," Kellogg told Politico.

“Such an abuse of process would undermine the legitimacy and credibility of complaints that the Title IX process is intended to deal with, as well as of the Title IX office to focus on its duties,” Jeannie Suk Gersen, an expert in Title IX law, told the Crimson. “It might be effective in drawing further attention to some students’ objection to Kavanaugh’s teaching appointment, but I don’t expect him to be found to have violated Harvard University’s Sexual & Gender-Based Harassment Policy based on the currently known public allegations against him.”

Janet Halley, another Harvard Law professor, called Kellogs' argument "implausible" and encouraged students who oppose Kavanaugh to focus on his appointment to the Supreme Court.

“I urge the students to divert their energy from this implausible claim that he’s going to create a sexually hostile environment by teaching at the Law School to the really grand issue of whether he’s fit to be in his current judgeship or promoted to the Supreme Court,” Halley told the Crimson.

While testifying in front of the Senate last week, Kavanaugh bemoaned the fact that, due to the sexual misconduct allegations against him, "I may never be able to teach again."