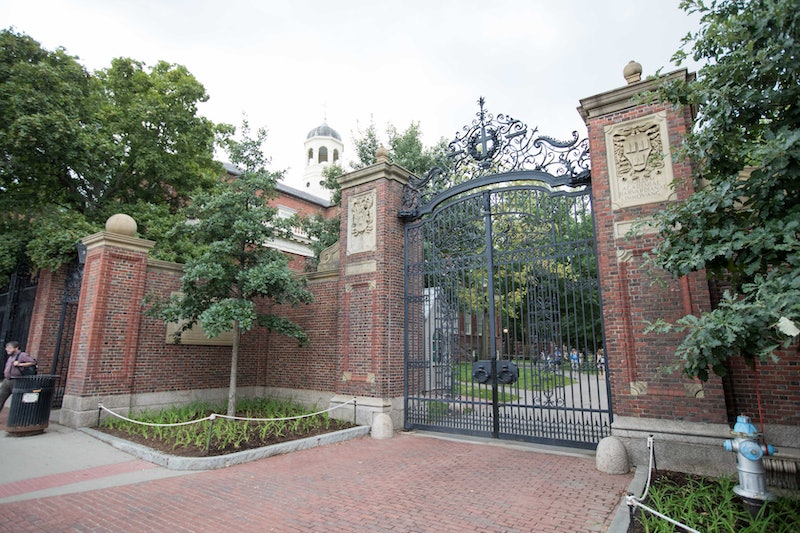 Harvard Law students opened up their emails Monday night to find some news concerning the man dominating news cycles for the past few weeks. President Trump's Supreme Court nominee Brett Kavanaugh will not be coming back next semester, according to The Crimson, Harvard University's school newspaper. The student outlet reported that Harvard has canceled Kavanaugh's 2019 course because he reportedly cannot "commit" to the class anymore. Bustle has reached out to both Harvard Law School and the White House.

"Today, Judge Kavanaugh indicated that he can no longer commit to teaching his course in January Term 2019, so the course will not be offered," Associate Dean and Dean for Academic and Faculty Affairs Catherine Claypoole wrote in the email to the law students, The Crimson reported.

Kavanaugh will not be coming back in January, when he was originally scheduled to teach. The news comes after repeated efforts to get a clear answer out of the law school; according to The Crimson, over the past week, the dean as well as the law school's spokespeople have refused to say anything about Kavanaugh's faculty status, citing confidentiality on "personnel matters."

Kavanaugh's leave from the faculty isn't entirely a surprise to some. The nominee referred to his position during his testimony before the Senate Judiciary Committee last week. The 53-year-old judge accused committee Democrats of ruining his teaching career, according to The Wall Street Journal. “I loved teaching law,” Kavanaugh said. “But thanks to what some of you on this side of the committee have unleashed, I may never be able to teach again.”

According to The Wall Street Journal's Rebecca Ballhaus, Kavanaugh has taught at Harvard for the past decade, since 2008. In January, Kavanaugh was set to teach "The Supreme Court Since 2005," a class he's offered since 2009, per HuffPost.

Other than the simple update from the administration, Harvard Law students have not gotten any other information about the cancellation, HuffPost noted, and it's not clear that Kavanaugh's class will be seen on the curriculum again.

As for the embattled nominee's faculty page, the site now just redirects to the main faculty page. A quick search no longer lists Kavanaugh among the listed faculty, though Kavanaugh's original page can still be seen on the Internet Archive.

Kavanaugh's nomination currently languishes in limbo as the Senate waits for the results of the limited, one-week FBI investigation authorized last Friday. But the public likely won't have to wait too long for an end to this: Senate Majority Leader Mitch McConell has called for a vote this week to decide on Kavanaugh's Supreme Court fate.