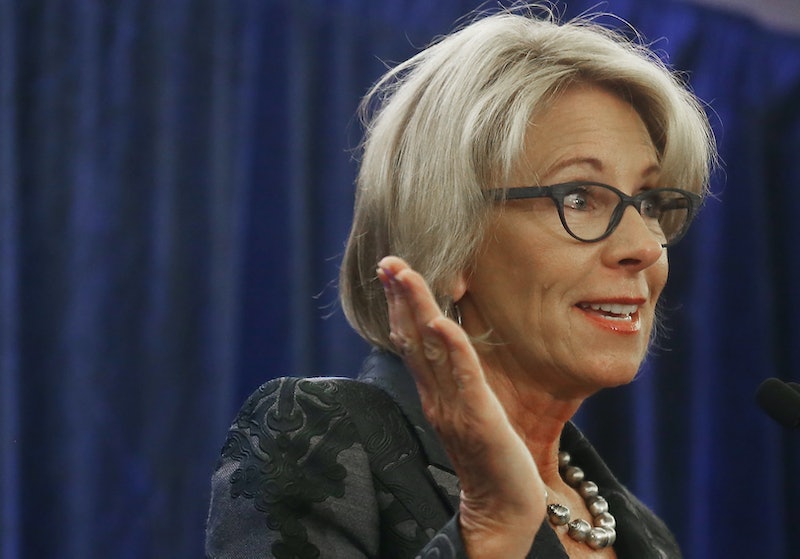 Education Secretary Betsy DeVos has seen controversy surround her short tenure in President Trump's administration since her Senate confirmation hearings in February. DeVos had come under criticism on a range of issues, from her seeming ignorance of key education protections to most recently rolling back Obama-era guidelines on how universities must address accusations of sexual assault. So it's not astonishing that Harvard University students protested DeVos' campus speech on Thursday. What might surprise some is their decision to do so silently, holding banners and standing with raised fists, a marked divergence from other recent campus protests.

DeVos had come to give a speech on school choice (which she's in favor of) at Harvard University's Kennedy School of Government. While delivering her remarks, one student stood up and unfurled a large homemade banner with the words, "White Supremacist" on it. Another student displayed a sign that read, "Our Students Are Not 4 Sale." A young man stood up beside him and raised his clenched fist. There were several others.

Outside, protesters of DeVos and her policies were louder. Holding signs reading, "Children are not commodities" and "Support Public Education," the group's objection seemed largely directed at DeVos' support of charter schools and voucher programs. Opponents argue school choice policies take funding and resources away from struggling public schools.

The students who initially protested DeVos on the ground floor inside were quietly removed. But they were not alone. Homemade signs held by students watching from the upper level read, "Dark Money" and "Educational Justice Is Racial Justice." The "Dark Money" sign appears to correspond with accusations that DeVos is unqualified for her position and was chosen because of how much she has donated to various Republican candidates and GOP causes. During the past two elections, the DeVos family donated $8.3 million to Republican super PACS, and that's not including individual donations to candidates.

Some other banners were clearly directed at DeVos' decision to end guidelines from the Obama administration that many saw as needed protections for survivors of sexual assault. A giant sign stated, "Harvard Legitimizes White Supremacy, Rape Culture, Transphobia." Another read, "Protect Rape Survivors." One simply said, "Resist," while another struck a tentatively hopeful tone with, "Our Harvard Can Do Better."

While DeVos did not interrupt her speech to address or respond to the protesters, she did take questions afterward. When asked about her decision to end what many saw as necessary protections for sexual assualt survivors, DeVos responded,

One sexual assault is one too many. By the same token, one student that is denied due process is one to many. So we need to ensure that that policy and that framework is fair to all students.

While student protesters inside seemed to be reacting more to DeVos as a symbol of D.C. corruption and Trump policies they see as oppressive, the outside protest was clearly aimed at DeVos' support of charter schools and private schools. The school choice movement is vehemently opposed by teachers' unions and many progressive organizations that view the movement as detrimental to public education. There is also opposition to the idea of vouchers, since that would entail potentially diverting tax dollars to religious institutions (private schools). Such a move seems to represent a breach in separation of church and state.

Massachusetts has 4.68 percent of its public school students in charters, lower than the national average of 5.85 percent. That may be explained in part by the fact that Massachusetts is consistently recognized as boasting one of the top public school systems in the country.

But for students and their families in states like Nevada and Louisiana, where public schools are ranked among the lowest in the nation, the option represented by a charter school has widespread voter support.

The issue of school choice is a hotly debated one, and DeVos will no doubt encounter future resistance to her charter expansion efforts. But as the student protesters at Harvard demonstrated, the opposition to DeVos goes well beyond disputes over K-12 public school funding.