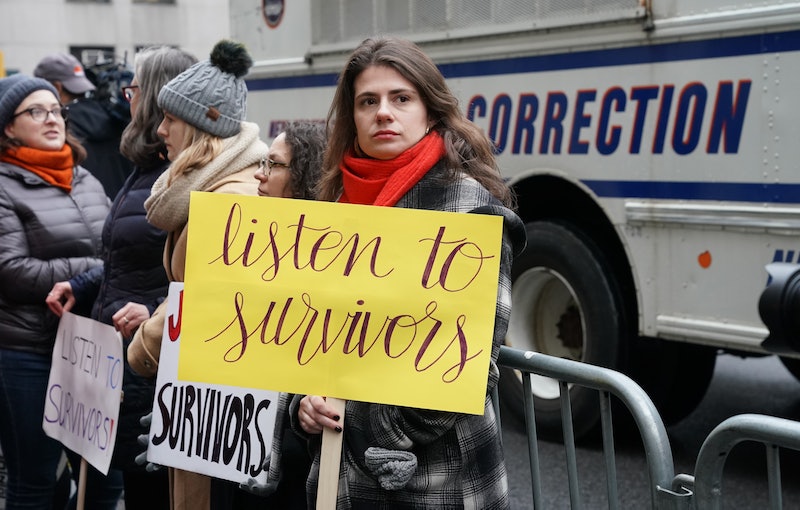 At least 100 women have accused former Hollywood producer Harvey Weinstein of sexual assault or harassment, according to New York Magazine's The Cut. Weinstein now faces criminal charges for allegations of rape and assault from two women. Weinstein has pleaded not guilty to all charges and says his interactions with the two women and all others have been consensual. His trial began Jan. 6 at a Manhattan courthouse, and he could face life in prison if he is convicted of predatory sexual assault, the most serious charge against him, according to Reuters. A legal expert breaks down for Bustle what you should know about the trial, which could take over two months.

The first allegations against Weinstein, which were reported by The New York Times and The New Yorker in October 2017, sparked the viral #MeToo movement online. Though activist Tarana Burke founded the original "Me Too" movement more than a decade ago, actor Alyssa Milano helped it rise to viral fame when she tweeted on Oct. 15, 2017, “If you’ve ever been sexually harassed or assaulted write ‘me too’ as a reply to this tweet.” The hashtag encouraged millions of survivors of sexual assault and harassment to speak out using the hashtag #MeToo.

Weinstein is facing both criminal charges from Manhattan District Attorney Cyrus Vance Jr. as well as civil suits from at least 29 other women in the United States, Europe, and Canada, Reuters reported. Hours after Weinstein began his trial in New York City, prosecutors in Los Angeles charged him with raping and sexually assaulting two other women, one of whom is expected to testify in the New York case, according to CNN.

Here's what to know about the case.

Vance has charged Weinstein with five counts of rape and sexual assault of two women. Mimi Haleyi, a former production assistant for Weinstein's old studio, the Weinstein Company, alleges that in 2006, the producer invited her to his home in New York City and sexually assaulted her, according to NPR. Prosecutors allege that Weinstein raped the second unnamed woman, in a Manhattan hotel in 2013, per The New York Times.

Reuters reported that Juda Engelmayer, a spokesperson for Weinstein, had said that the two women had "long-term relationships" with Weinstein, and that the criminal case shouldn't be conflated with public criticism of him. Engelmayer declined additional comment to Bustle.

Weinstein's attorneys also argue that Haleyi wasn't assaulted because she texted Weinstein seven months later to arrange a meeting, The Cut reported. In a December interview with ABC, Weinstein's lead attorney Donna Rotunno said of Haleyi's claims, “If you don’t want to be a victim, don’t go to the hotel room."

Samuel Estreicher, the director of the Center for Labor and Employment Law at New York University's School of Law, tells Bustle that Rotunno's argument is an example of how Weinstein's team may try to weaken Haleyi's story. But even if Haleyi was afraid that something could happen if she went to the hotel room, “she has to engage in business with him,” Estreicher says, “so she’s taking a risk.” But that risk is not necessarily consent, it just makes her story a weaker piece of evidence, he says. A total of six women will testify in the Manhattan case; the four not included in the criminal charges will help illustrate the prosecutors' claim that Weinstein committed "predatory sexual assault" — the most serious crime that could result in a life sentence.

Jury selection will start on Jan. 7, and lawyers for both sides will have to choose 12 jurors and six alternates from a group of 500 New Yorkers, The Times reported. But finding a jury in trials like Weinstein's often isn't easy and can take weeks.

"The theory of a trial is that everything you learn about the world, you learn at the trial. You don't come in with pre-judgment," Estreicher says. But the Weinstein case has been so highly publicized that it could be hard for lawyers to find a jury that is not aware of the case. Once they do find a jury, the judge will set a date for the trial.

The trial date will likely be far enough away that it would give the defense enough time to find any experts it might need to call to the stand, Estreicher says. During the trial, the court will hear testimony from any experts and Weinstein's accusers.

Civil vs. Criminal Cases Against Weinstein

Weinstein also faces civil suits from over two dozen women. Estreicher explains there are a few reasons they might have chosen to file a civil suit over a criminal charges. First, the standard of proof in a civil case, called preponderance of evidence, is easier to prove than the standard for criminal cases, which is beyond a reasonable doubt. Second, if lawyers want monetary compensation, also called "recovery," for their clients, they can't get that in a criminal case, Estreicher says. "In a civil case, there'll be a recovery against Weinstein and that'll also pay off the fees for the lawyers," if they win, he says.

If prosecutors in a criminal case successfully convict Weinstein, it could help strengthen civil cases. But it will be at least another six to eight weeks until the criminal trial against Weinstein concludes. Protesters outside of the Manhattan court this morning held signs that read "Justice for survivors" and "Listen to survivors." Rosanna Arquette, an actor and director who accused Weinstein of assaulting her during a business meeting, said in a speech outside the court, “We are here to ensure that the focus of this criminal case is on the perpetrator — the perpetrator’s actions and not his victims. ... And whether it is this trial or in the future, Harvey will be held accountable for his actions.”

More like this
25 Inspiring Quotes From Black Women To Celebrate Black History Month
By Kyli Rodriguez-Cayro and JR Thorpe
24 History-Making Black Women You Probably Didn't Learn About In School
By Ayana Lage and JR Thorpe
6 Organizations Fighting Police Brutality That You Can Support Right Now
By Syeda Khaula Saad and JR Thorpe
Savannah Guthrie Got Her First-Ever Tattoo With This Former Wild Child
By Suzanne Zuckerman
Get Even More From Bustle — Sign Up For The Newsletter
From hair trends to relationship advice, our daily newsletter has everything you need to sound like a person who’s on TikTok, even if you aren’t.