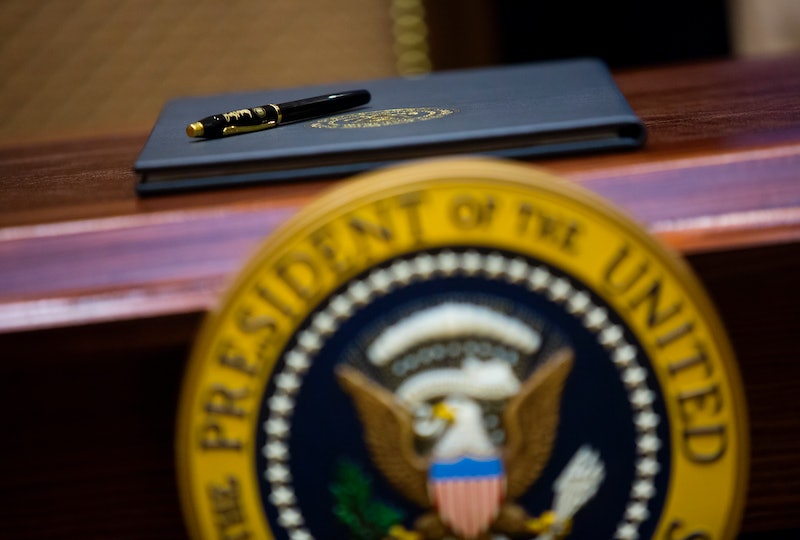 Following weeks of increasing controversy, talk about the potential impeachment of President Donald Trump has reached fever pitch. With Rep. Al Green's call for impeachment, some observers are probably wondering if any U.S. president has ever been impeached before. The answer: Two presidents in U.S. history have been impeached, though no president has ever been removed from office.

Impeachment constitutes the official levying of charges against a government official. In the U.S., the House of Representatives has the power to impeach a president (an impeachment is similar to the court equivalent of an indictment). The Senate then has the power to either acquit the impeached president and keep him in office or convict the president and remove him from office. Thus, a president can be impeached but remain in office, as has been the case with the only two incidents of presidential impeachment in U.S. history.

Andrew Johnson was the first-ever impeached U.S. president. He was impeached in 1868 after being accused of violating the Tenure of Office Act by not receiving the approval of the U.S. Senate when he tried to replace his Secretary of War. After his impeachment by the House, Johnson was acquitted of these charges by the U.S. Senate, which requires a two-thirds vote for removal from office. Johnson went on to finish out his term.

Bill Clinton constitutes the second-ever impeached American president. Clinton was impeached by the House in 1998 over perjury and obstruction of justice charges related to allegedly lying under oath to a grand jury about his affair with former White House intern Monica Lewinsky. Clinton was likewise acquitted of these charges by the U.S. Senate and also went on to finish out the rest of his presidential term.

In terms of presidential impeachment history, one should also note that while Richard Nixon was still in office, impeachment proceedings against him began on obstruction of justice charges related to the Watergate Scandal. However, Nixon resigned before the House vote on impeachment took place and was never officially impeached.

As one can see, presidential impeachment is exceedingly rare and has only happened a handful of times in U.S. history. Moreover, presidential removal from office after impeachment has never occurred and would be absolutely unprecedented.

While there has been a lot of chatter recently about the prospect of impeaching Donald Trump, in reality impeachment and subsequent possible conviction is a very long, drawn-out process. As Vox indicated in an article published on Tuesday, "It’s quite difficult to impeach, convict, and remove a president from office — so much so that’s it’s never happened in US history...So far, we are not even remotely close to this politically charged process getting started for Trump, let alone actually happening."

That being said, the fact that there has been so much talk about potentially impeaching Trump and the fact that, according to a recent poll, more Americans support his impeachment than oppose it, is nothing to take lightly. Trump and his administration have placed some serious doubts in many voters and elected officials' minds about his fitness for office and that is not, by any means, inconsequential.