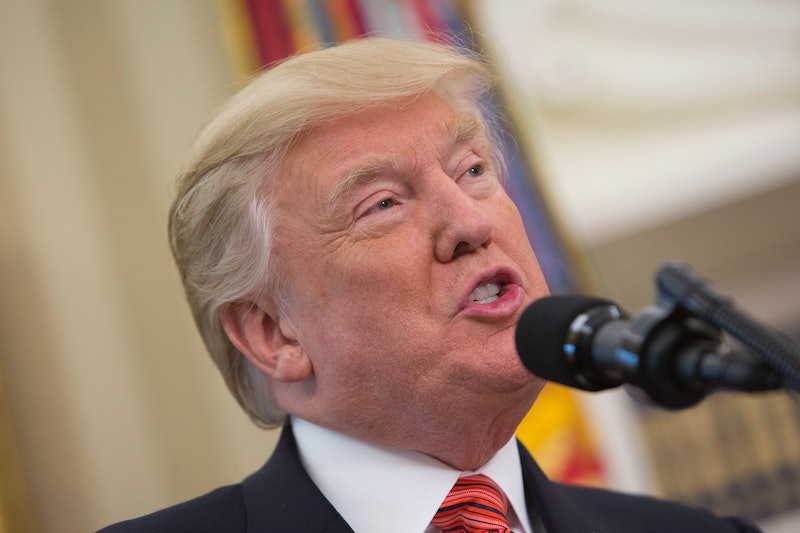 This week, a report from The Washington Post suggested that President Donald Trump may be considering some radical action to halt independent counsel Robert Mueller's investigation into his campaign's reported connections and contacts with the Russian government, and whether any collusion occurred between the two. Namely, the White House has reportedly been researching how pardons work, and the limits (if any) of the president's power to use them. So, the question: has a president ever pardoned himself, and could Trump do so?

It's no surprise that people are wondering. In recent weeks, the Mueller investigation appears to be heating up, with reports that the investigation is reaching into Trump's finances, as well as attempting to flip former Trump campaign chairman Paul Manafort into cooperating. And that's without mentioning the recent release of emails from his son Don Jr. expressing excitement at the idea of receiving Russian government dirt on Hillary Clinton during the presidential race, especially "later in the summer."

In other words, from the perspective of Trump and his administration, there's a lot of pressure mounting. Which might be what's led them, according to reports, to look into the limits of presidential pardon powers. The Post report cites a source "familiar" with the situation, who says that Trump has even asked about his ability to pardon himself, an act which would be utterly unprecedented in American history.

Yes, you read that right: no president has ever pardoned himself, and it's not even assuredly legal to do so. For his part, Trump insisted in a tweet on Saturday that "all agree" the president has "complete power" as far as pardons are concerned, but that's not actually the case; different constitutional law experts have varying opinions on the question.

Constitutional law professor Laurence Tribe, former Bush administration ethics lawyer Richard Painter, and former Obama administration ethics lawyer Norm Eisen, for example, come down firmly on the "no" side. In an op-ed for The Washington Post on Saturday, the three made the case that a president pardoning him or herself is unconstitutional, with the following being their most succinct explanation of their interpretation of the law.

The Constitution specifically bars the president from using the pardon power to prevent his own impeachment and removal. It adds that any official removed through impeachment remains fully subject to criminal prosecution. That provision would make no sense if the president could pardon himself.

Regardless of whether some constitutional lawyers and scholars think it's not allowed, however, that doesn't mean Trump couldn't at some point try it, and it's anybody's guess what would result from such an attempt. For the record, a "close adviser" told the Post that Trump's interest in learning more about pardons was more for knowledge's sake than because he's eager to use them.

This is not in the context of, ‘I can’t wait to pardon myself.'

In short, there's no way to predict whether Trump will ever try to do such a thing, although his recent tweets are certainly suggestive. But this much is clear: a presidential self-pardon would have no historical precedent, which means if it happens, the country will be entering some truly uncharted waters.