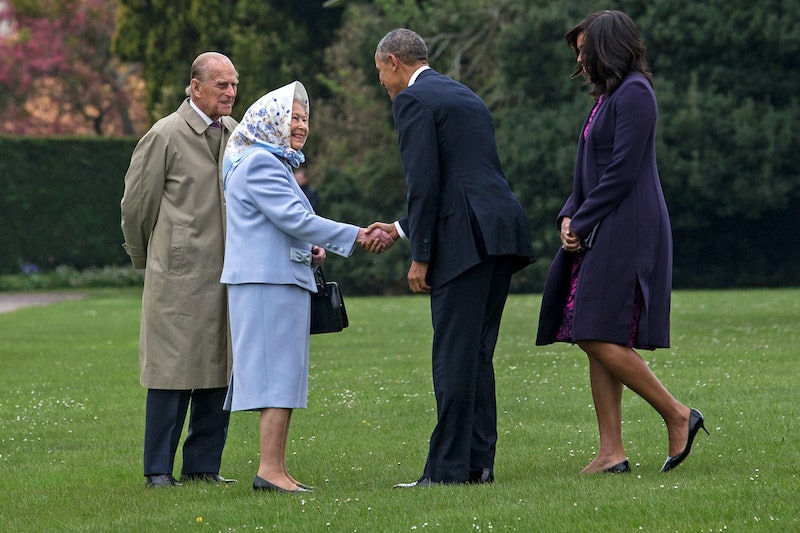 Britain has traditionally been one of America's closest allies, and every president over the past century has had to work with the United Kingdom. President Donald Trump is scheduled to visit the U.K. for a meeting with Prime Minister Theresa May, and while he is there, he is also expected to meet Queen Elizabeth II, CNN reported. It will be Trump's first presidential encounter with the British monarchy, but not the first time that a U.S. president has ever met the queen.

About a year and a half into his term, Trump has yet to meet Britain's head of state. For some, face time with the queen is a necessity for Trump's visit. In his interview with Sky News, the United States ambassador to the U.K. emphasized the importance: "He has to see the head of state. Putting his foot on the ground of British soil, it's job one — very, very important, very symbolic," Robert Wood Johnson Johnson said. "Meeting Her Majesty is the most important thing, because she's the head of state, and from there on, it'll be what the president wants to do."

Queen Elizabeth's encounter with Trump would be one in a long list of American presidents she has met throughout her life.

Born in 1926, Queen Elizabeth II is the longest-reigning British monarch in history — so long that 12 different presidents have been elected since she assumed the throne.

These photos show the Queen's encounters with several U.S. commanders-in-chief throughout her reign. Before her ascension to the throne, her first presidential interaction was in 1951 with Harry S. Truman, the only president she met while she was still a princess, according to CNN.

As a young monarch, the first sitting president she met was Dwight D. Eisenhower, who hosted her first state visit to the United States in 1957. Four years later, the Queen and Prince Philip hosted a dinner for John F. Kennedy and his wife Jackie, an event that was scandalized in the Netflix show The Crown. Queen Elizabeth went on to meet with Richard Nixon, Gerald Ford, Jimmy Carter, Ronald Reagan, George H. W. Bush, Bill Clinton, George W. Bush, and Barack Obama.

The queen's last meeting with Obama took place at Windsor Castle in April of 2016, according to CNN. Obama arrived with his wife, Michelle Obama, to celebrate Queen Elizabeth's 90th birthday.

The queen has met with all but one of the U.S. presidents elected during her reign, CNN reported. If things go smoothly, Trump will join the ranks of the other 10 in July, leaving Lyndon B. Johnson as the only one to still miss out on that honor.

While Trump has never met the queen, he has met with May before. According to Politico, the two met in Davos, Switzerland in January for bilateral talks, which ended with Downing Street officials commenting that the chemistry between Trump and May was “good.”

But while the vibes between the two leaders may have been "good," the people of Britain weren't in the same boat last year. More than 1.8 million signatures adorned a 2017 petition calling on Britain to cancel its invitation to Trump, with many believing that the visit “would cause embarrassment” to the queen. The British government did respond, writing on the petition site, "HM Government believes the President of the United States should be extended the full courtesy of a State Visit. We look forward to welcoming President Trump once dates and arrangements are finalised."

Earlier this year, Trump canceled a trip to London, where he had planned to open the new U.S. embassy. He blamed the Obama administration for selling the old building for "peanuts," despite the decision coming from former President George W. Bush, according to NBC News.

With any luck, officials are hoping Trump's arrival will go smoothly — the July visit lands on the last of the weekdays, making his first meeting with the Queen on Friday the 13th.