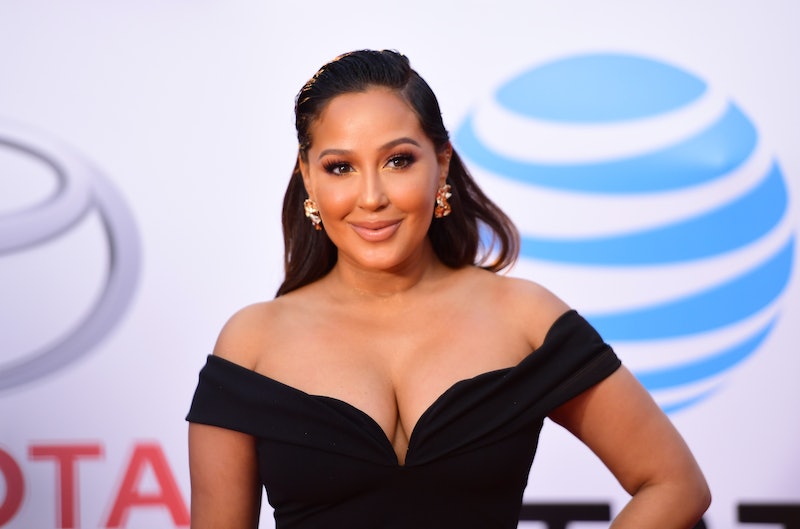 Actor and singer Adrienne Houghton took to The Real's Instagram on Dec. 13 to ask the public to stop speculating about whether she's pregnant, saying, "... This is not a baby; this is sweet potato pie,” Houghton said, holding up a piece of pie for viewers to see. “I’m not pregnant! I have Hashimoto’s!”

As Houghton mentioned in her Instagram post, Hashimoto’s is an autoimmune disease that attacks the thyroid, according to Mayo Clinic. This typically leads to hypothyroidism, or an underactive thyroid, says Mayo Clinic, which can cause fatigue, puffy face, hair loss, weight changes, joint pain, muscle weakness, depression, memory lapses, and excessive menstrual bleeding. Hashimoto’s usually affects women between the ages of 40 and 60, but it can also affect teens and younger women, according to the Office on Women’s Health. Women are seven times more likely to have Hashimoto's disease than men, according to WebMD.

Some people with Hashimoto's might not have any symptoms at first, so they could live with the condition for years without even knowing they have it, according to the National Institute of Diabetes and Digestive and Kidney Diseases, a department of the National Institute of Health (NIH). The symptoms of Hashimoto's can also be similar to other medical conditions, says WebMD, so it's not always easy to get the correct diagnosis right away.

Nearly half of women with Hashimoto’s disease have trouble getting pregnant because the condition causes irregular menstrual cycles, according to the Office on Women’s Health. Houghton has been candid about her struggles to get pregnant and how the public’s speculation can be hurtful, telling The Real, “I think so many people are very insensitive to that, in the sense [that] I know you guys are like, ‘Is she pregnant?’ ‘Her face is fuller.'"

Rodriguez described having Hashimoto’s as “the curse of a lifetime” in an industry obsessed with weight, SELF reports. But once Rodriguez started focusing on health instead of weight loss, she told SELF, that’s really when she started to get her condition under control. “[Hashimoto’s] affects so many aspects of your life. I’ve had it for so many years … that rebellion of not taking care of myself can’t exist anymore,” Rodriguez told SELF.

Actor Tamera Mowry, who is also in the Instagram video with Houghton, encouraged viewers to look up “sympathy” and “empathy” while they’re researching Hashimoto’s. The world could use a little more empathy when it comes to the way it treats people with chronic illnesses like Hashimoto’s. The symptoms might not be as visible as other medical conditions, but they're just as real.