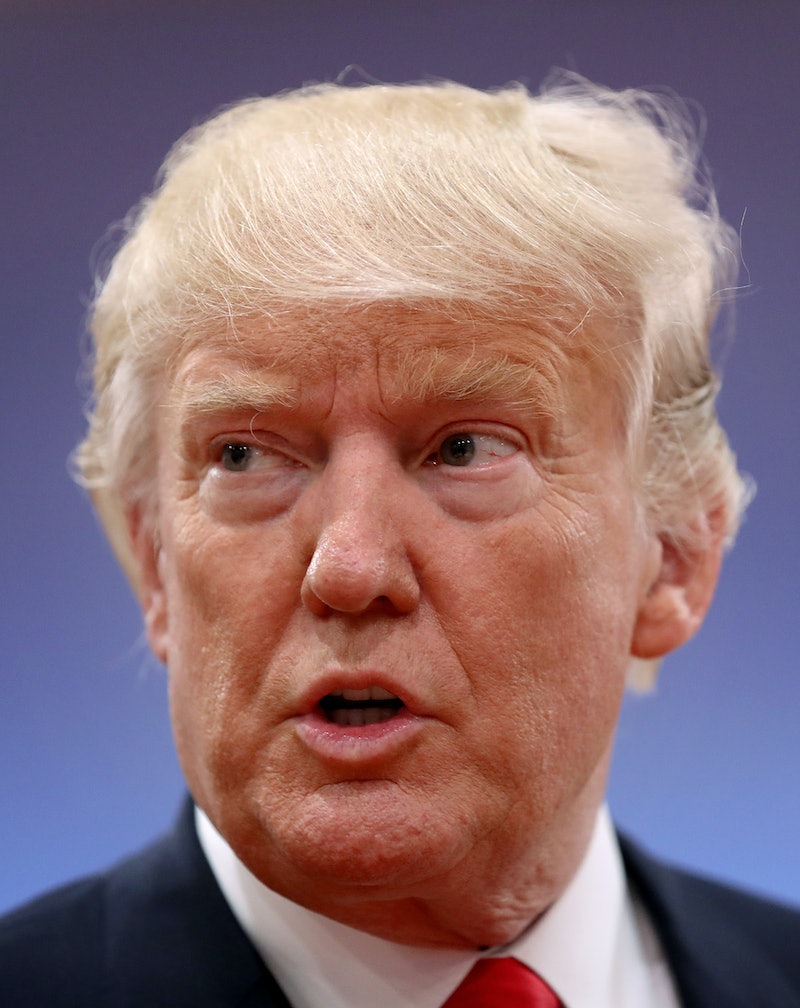 A lot has changed in the six months since Donald Trump was sworn into office, both on a political level and a personal one. Bustle’s State of Our Unions series looks at how millennial women's relationships with their friends, family members, and romantic partners have been affected since the 2016 election. Today's topic: men who act like they're progressive feminists, then reveal themselves to be something quite different.

Over the past half-decade or so, feminism has experienced a boom in commercialized mainstream popularity — and over the course of that boom, a number of celebrities discovered that "male feminist" is now a powerful cultural niche. Actors like Matt McGorry and Mark Ruffalo receive frequent fawning praise for their seemingly feminist personas. Ryan Gosling is even commended for a feminist persona that he didn't really create (it was basically gifted to him by Feminist Ryan Gosling creator Danielle Henderson). And the exchange rate for men to be lauded as feminist heroes seems infinitely weighted in their favor. A male celebrity acknowledges something that women have been complaining about for years, offering a comment as inane as Chris Pratt’s “I wanna take a moment to advocate for the equality — socially, economically and politically — of our beautiful women,” and they get a day of glowing headlines (as opposed to the deafening silence that many women encounter).

So it’s not a surprise that feminism has become social currency among many men, famous or otherwise, who have seen that calling themselves feminist is an easy way to ingratiate themselves to women, regardless of their actual beliefs or actions. And while some newly minted male feminists are doubtlessly sincere, others seek to cash in on the cachet of feminism for praise and female attention before ultimately revealing their profound indifference or disdain toward the women around them.

Saturday Night Live neatly summed up the type in their sketch “Girl at a Bar.” In the video, the titular girl (played by Cecily Strong) deals with a bevy of seemingly progressive feminist guys hitting on her — each of whom quickly reveal himself to actually be a virulent sexist. One guy, who pulls open his flannel to reveal a “The Future is Female” T-shirt, responds to being politely turned down for a date with “OKAY, BITCH!”

It's a hilarious sketch. But for many women, it's painfully close to real life.

Last week, while preparing to write this piece, I tweeted “HEY! Are you a girl that's dealt with a fake-liberal woke boy? DM or email me for a piece!” Fairly vague, as required by the 140-character limit, but good enough, I figured, to get a few anecdotes.

The first message came within a few seconds. Within 15 minutes, I had more stories than I could possibly use. Over the next hour, I'd respond to one message while three more flooded in, typing as fast as I possibly could to stem the seemingly infinite influx of girls who had dealt with boys who had used “wokeness” as a mask before revealing someone sexist and shameful underneath. They sent me stories like this:

“My ex-boyfriend claimed he was a liberal (Bernie Bro) but would reference BLM as ‘THOSE black lives matter people...He’d say things like, ‘Not to sound racist but…’ ‘Men get raped too, but you don't see them doing the shitty things girls do,’ ‘Did you know girls lie about getting raped?’”

A certain political pose turned up again and again in the stories women sent me: boys who wore progressivism like fashion, who utilized the social cache of being young and liberal without contributing any meaningful work toward equality, or even while actively pushing women further down.

Here are some of those women's experiences, in their own words:

“I recently had a cis white male tell me that at his art school, he was the minority because he was 'straight and masculine — like a man's man.' He said he was often treated poorly and because of this he could understand the struggle women and POC face. I'm so tired of having to choose between politely accepting irrational dribble like this and calling it out and becoming a stereotypical 'angry black woman' at a party."

“From multiple fake-liberal, #ImWithHer, arts school men: ‘Wow, I never thought I'd be into Indian girls, but you're different.’… Also, I go to film school, and I can't even count the number of times men in classrooms have talked about how they think diversity/gender representation isn't really important/they'd rather focus on the emotions of straight white dudes”

“He always talked about respect 'n jazz and then told me I gave him blue balls when I didn't want to get down and dirty in my grandmother's house.”

“I dated a guy for nine months who hated Trump, but who proceeded to mansplain to me how the gender wage gap doesn't exist and that it's just a ruse for women to take men's jobs."

“He worked at a nonprofit for survivors of domestic violence; he constantly praised his awesome single mom who raised him to be a feminist; we had all these conversations about social justice, sexual assault, and Bernie Sanders. I had just had two terrible experiences in a row that maybe counted as sexual assault and my trust of men was at an all-time low. So he seemed like THE DREAM! Until he very casually mentioned that he thought women with children shouldn't have high-powered jobs that occasionally required late hours, because their children would grow up neglected and resentful.”

“I dated a Fake Liberal Woke Boy for two years — a majority of that time involving him ‘educating’ me on the injustices of the world. He was the epitome of liberal woke boy — with the thrift clothes and tattered Kerouac novel to prove it. Then, I found out he protest-voted for Bernie in the 2016 presidential election. In Florida.”

“I matched with this guy on Tinder and we had a coffee date where I walked away thinking he was super cool. He even said he was a feminist, but he asked that I not thank him for it, which felt weird, but I was like 'OK, well at least he's cognizant of that.' Anyway, fast forward to me having him over for dinner. He comes over and it feels like he's a totally different person. He's arrogant, making suggestive remarks, acting like he's this huge hot shot...When I suggested he leave, he got SUPER defensive and asked 'What do you mean, leave?" As if he was entitled to something. He put up a big fight about it but eventually left. Then later that night, like 1am, I start getting a series of texts from him, a lot of it to the effect of 'I wasn't even attracted to you' and 'You should see the other girls I've been with.' This same dude went to the Women's March and posts about being an ally to women.”

“We're hooking up, and literally during sex, he says (this is an exact quote, it's so burned into my memory): ‘I like the bush. I love that you're not afraid to have some hair. It's really sexy. Sexier than being hairless, actually.’ (It's the middle of winter, it's not a feminism thing, dude). After I broke up with him, he called me a bitch and refuses to see me again, unless it's for a casual hookup.”

It would be simple to imagine every case of false feminism was a transparent attempt to get girls into bed, a word plugged into a Tinder profile to elicit more right swipes. And as one message I received, from a guy sharing his perspective, revealed, sometimes that is the case:

“I personally have several friends who will completely change their statements and opinions on social issues in order to please the group they are with. For example, I know a guy who will tweet out messages in support of feminism and call himself a feminist, but when he's around other guys he will make sexist remarks and call girls ‘feminazis.’ This same guy will blatantly lie to girls at parties and social settings about his political ideology and say he voted for Hillary, when he actually voted for Gary Johnson (!!!!! I know, right????).”

But the uncomfortable truth is that most aren’t open-and-shut cases of deception. Men can genuinely believe themselves to be liberal and progressive and not recognize the hypocrisy of their own actions when it comes to the ways they interact with women in their own daily life. It's a distance that can be found even among men who are actively working to improve certain aspects of the current political situation.

“My partner and I were having drinks with some friends of ours. She was the only woman, and the three other dudes there talked over her the entire time, explaining (incorrectly) everything from historical events to the recent U.K. election. She got her degree in anthropology and is a dual citizen of the U.K. and USA but they would instantly talk over her the moment she wanted to say something (or give the correct context/answer… I know this is just traditional mansplaining, but the troubling thing was all my male friends were leftist organizers with local groups like the Democratic Party and Democratic Socialists."

Many of these men believe that hating Trump is enough proof of their progressive bona fides. But hating Trump, who seems to constantly move the goal posts in terms of lack of dignity in the American presidency, is an incredibly low bar for progressivism.

Public outrage over Trump’s latest ridiculous tweet-storm is easy—it’s cathartic and leads to the dopamine rush of faves and RT’s from those who already share your opinion. Trump is a cartoonish villain. Calling him out for his boorishness, his lack of preparation, his tweets — as these kinds of men often do — is easy and instantly rewarded with unchallenged agreement by like-minded peers.

But most issues of feminism require more of men. They require men to recognize their own privilege and confront the biases they have been raised with their entire lives.

Working toward actual policies, especially policies that don’t directly benefit you, is the true indicator of one’s political values. I’ll argue that for all of the dulling down of its edges, feminism becoming trendy is an overall positive development, but it opens the doors to those who see it like a brand name on a designer purse. And when a man who calls himself a feminist ultimately reveals misogyny or racism, it’s an even deeper betrayal.