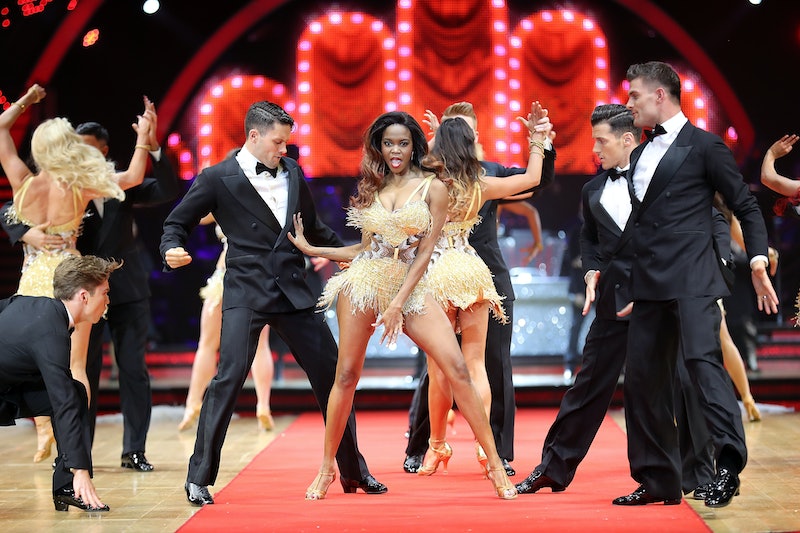 If you're a fan of Strictly Come Dancing, you'll no doubt be already missing the action since the last series ended in 2018. From the sparkling outfits to the backstage drama, and some of the best zingers from Craig Revel Horwood (and OFC, a bit of dancing thrown in for good measure), there's a definite Strictly shaped hole in my heart right now. I'm already wondering: have the celebrities for Strictly 2019 been announced? Unfortunately, I — among with all other die hard SCD fans — have a good while to wait as the show doesn't pick up again until the second part of the year. But this hasn't put a stop to speculation over who may be taking part though, and there have been plenty of rumours running riot.

Previously: First up, according to The Radio Times, is Alan Carr. The star has previously mentioned his interest in taking part in the show, which is promising. After appearing on the show in 2018 to read the terms & conditions on air, Carr was apparently cornered by show staff!

“After I did the terms and conditions on the final this woman basically threw a net over me and held me hostage until I said I'd do it!” he told the publication.

However, it doesn't sound as though 2019 is going to be his year. Sob.

While it sounds unlikely Carr will be appearing this year, there is one celebrity who has been pretty open about his involvement. Chris Evans has already revealed to The One Show that he has agreed to star, despite not yet signing an official contract.

“I have said yes. Everyone puts it off and tries and keep it a secret. No, announce now. We’re doing it now,” he proudly announced.

The agreement apparently came about after a conversation with Strictly's commissioning editor Jo Wallace: “We had a cup of tea and she said, ‘Are you up for it? This is what you need to know about it, this is the minimum, this is the maximum, it’s not as easy as maybe you imagine it is.’ But I know it isn’t."

Another celebrity who was seemingly cornered by Strictly staff after reading the terms & conditions on the show in 2018 was news presenter Huw Edwards. In January, Edwards spoke to Radio 2's Steve Wright about the possibility, joking: “Following my stellar appearance reading out the terms and conditions in early December, where I basically set the British television world alight, I was asked if I’d consider Strictly."

He continued: “And I think the answer is, Steve, I’ve come here today for some advice. Despite all appearances, I am quite shy.” It appears as though one thing that may be putting the presenter off, however is the bold ensembles worn by Strictly contestants and professionals. “That’s what scares me," Edwards revealed. "I think I’ve just got to ponder it . . . just gauge public opinion.”

I for one, can't wait to potentially see him in a sparkly suit! According to The Sun, other celebrities who have hinted at interest in competing are Vogue Williams, Scarlett Moffat, and Fearne Cotton. Roll on Strictly 2019...